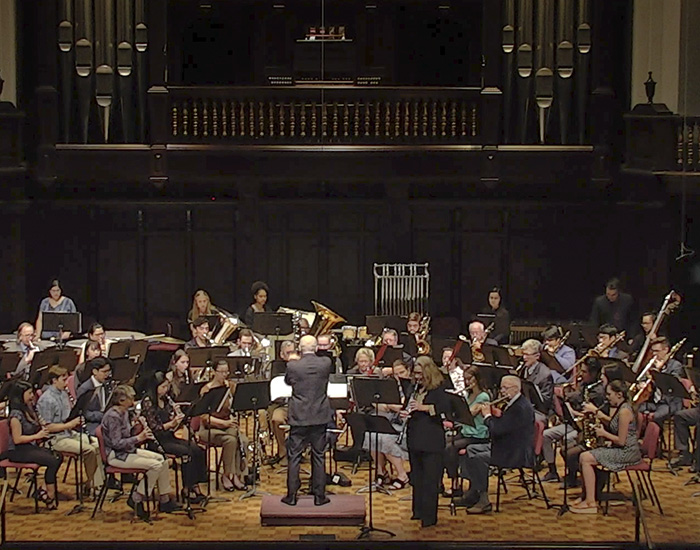 Stephanie Lee, MBS ’21, devotes most of her time at Keck Graduate Institute (KGI) to the Master of Business and Science (MBS) program she started this fall. Josephine Gao, MSGC ’21, does the same as a student in KGI’s Master of Science in Human Genetics and Genetics Counseling (MSGC) program. Yet two evenings each week, they dedicate themselves to an activity unrelated to their academic studies: the Pomona College Band.

One of the oldest college bands in the United States, the Pomona College Band welcomes undergraduates, faculty, and staff from throughout The Claremont Colleges, as well as community members, to rehearse and present two concerts each semester.

“I’m a big band nerd,” says Gao, who has played the clarinet since elementary school, was later named to the Northern California and California State Honor Bands, and performed with the UCLA Wind Ensemble as an undergraduate. “I couldn’t find time for it during my last two years of college, so I thought it was a great opportunity to do it here.”

Like Gao, Lee has participated in music since childhood and a band at UCLA. She began with the piano at age five and played the flute from elementary through high school. She took up the oboe in high school and was part of her school district’s in-concert honor band. Lee has continued to play the oboe as a member of the UCLA Symphonic Band and now the Pomona College Band.

“Playing in the band is a great way to work with other people with a shared interest and values.”

“It’s a good break from studying for me, and I really like the sense of community. I hadn’t played for awhile, and it feels like I’m coming home,” she says of her decision to join the Pomona College Band.

Gao echoes Lee’s appreciation for the opportunity to meet people with similar interests, adding that involvement in the band also expands her interactions to a wider group.

“My program is small and everyone has the same career goal, so it’s an interesting change to be in the band, with everyone studying different things but sharing the same hobby,” explains Gao. “There’s also a sense of familiarity, being part of music, that’s helpful when you’re moving to a new program and a different school.”

Even Lee was a new acquaintance. Though each graduated from UCLA, Gao and Lee didn’t know one other before joining the Pomona College Band and discovering they were both KGI students. They are currently the only graduate students among the band’s members.

“There are different ages and experience levels, so I really learn a lot,” says Lee. “We can play a wide range of music. We’ve played some suites and marches, which are really fun because they’re fast and upbeat. We also did some premieres. It’s nice to have established pieces and also the opportunity to play original pieces that people came up with this semester.”

Audience members enjoy the musical mix as well. Among those who attended the Pomona College Band’s performances this fall was KGI’s Dean of Students Cynthia Martinez, who both loves music—she played and taught piano for many years—and wanted to show support for Lee and Gao.

“I think it’s great to have academic and social integration, and a feeling of community inside and outside the classroom,” says Martinez, noting that some of the students’ KGI classmates also came to the concert. “And the performance was magical, absolutely beautiful.”

For Lee, the integration of the MBS program and music will resume when rehearsals begin again in January, and she expects to remain part of the Pomona College Band until she graduates from KGI. Gao also hopes to continue, although she explains that this will depend on the demands of her spring course load in the MSGC program and the location of her clinical rotations next year.

“I couldn’t imagine music not playing a part in my life,” says Gao.