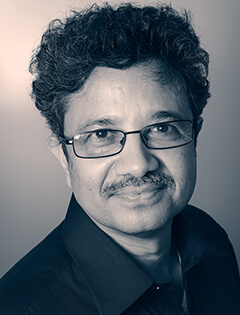 Introduction to the Basics of the Scientific Method

The logic of scientific discovery is not different from everyday reasoning, but must be deliberately analyzed so that we do not fall into the trap of commonsense. Science is the apotheosis of commonsense; history of science has repeatedly shown that commonsense is false. This talk will explore the logic of reasoning in science.

Professor Ray, who joined KGI in July 2001, earned his PhD in microbial genetics from Monash University in Melbourne, Australia. His PhD research led to the identification of a gene for efficient plasmid maintenance in Escherichia coli and a method for generating a multi-copy infectious plasmid that is packageable inside a virus coat–an early example of synthetic biology. He subsequently conducted research at the Institute of Molecular Biology, University of Oregon, and the Department of Biology, Massachusetts Institute of Technology, during which periods he developed methods for precise in vivo chromosome engineering in yeast and in an experimental plant. He was an Assistant Professor from 1991 to 1995 and Associate Professor from 1996 to 2001 of Biology at the University of Rochester, New York, and an adjunct associate professor at the University of California, San Diego from 2001 to 2004.

Dr. Ray was a visiting professor at the University of Rochester from 2001 to 2004, at Institute for Systems Biology in Seattle in 2009, University of Hyderabad in 2009, and is currently a visiting faculty in California Institute of Technology, Pasadena. Research in his laboratory led to the discovery of the first known maternal effect embryo pattern formation gene in plants. His student, Teresa Golden, cloned a plant gene (DCL1) that later became known as the first member of the Dicer group of genes required for microRNA biogenesis. His PhD student Stephen Schauer identified the remaining known plant Dicer genes (DCL2-4). From 1999 to 2001, while on extended leave of absence from the University of Rochester, Dr. Ray directed research programs on regulation of gene expression and gene targeting at a plant biotechnology start-up company in San Diego.

In the late 1990s, Dr. Ray, along with a computer scientist colleague Dr. Mitsunori Ogihara, published a series of papers on experimental and theoretical investigations on designing massively parallel computing devices using solution phase DNA chemistry. Accounts of this research were featured in several news media including the New York Times and the International Herald Tribune and he and Dr. Ogihara were featured in the book One Digital Day: How the Microchip is Changing Our World.

He currently teaches courses on molecular systems biology that includes molecular mechanisms of human diseases and pharmacogenomics. He was KGI’s faculty chair (2010-2016) and director of KGI’s PhD program (2006-2016).

In his leisure, Ray is an avid amateur photographer, who has been profiled at a number of sites including in the Street Photography Magazine June 2018 issue.

Lunch will be provided. Please RSVP below so that we may ensure all attendees are accounted for.

BSURE and CBB students MUST register in order to receive lunch.