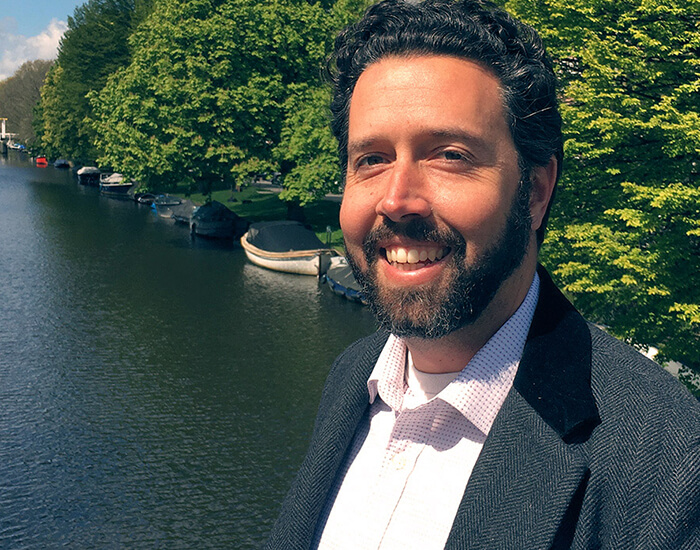 Though extremely rare, CLN2 disease is particularly devastating. Those affected by the inherited disease are young children whose symptoms surface by age 4. Many of them die before turning 10.

Keck Graduate Institute (KGI) alumnus Tom Lester, MBS ’04, has been working since 2012 to change this grim outcome for children and their families. The senior director for product development at BioMarin, a world leader in biopharmaceuticals for rare genetic diseases, led the cross-functional team responsible for introducing the first therapy for CLN2 disease.

Brineura, which received FDA approval in 2017, is an enzyme replacement therapy delivered directly into a patient’s brain. Lester says, “We talk about being innovative, but even for us this was a lot more innovative than most programs. There was never a product like this before.”

Lester and his team also recognized the urgency of developing a treatment and making it available to patients: Desperate families were waiting for help.

“The program was more emotionally involving than others,” he says. “The disease moves so quickly, and the patients are so young. I found it was sometimes okay to cry at work. It was motivating.”

Now children with CLN2 disease are receiving treatment all over the world. Though it’s too early to know the long-term effects, Lester is optimistic they will be positive.

“It’s not just data and clinical studies that are telling me,” he says. “I’m able to see the real-world impact and hear stories about patients going to their first day of school or playing with a brother or sister.”

Meanwhile, Lester’s work on Brineura has entered a new phase of the product lifecycle, and he’s also involved in the development of other enzyme replacement therapies.

“I really like the job I do,” he says. “I enjoy forming teams and getting everyone to a common set of goals and priorities. I also like learning new things and taking big steps forward.”

This doesn’t surprise the KGI faculty acquainted with Lester over the years. When Professor James Sterling first met him, Lester was a recent University of Southern California chemical engineering graduate with an interest in the biological sciences.

Trained as an engineer himself, Sterling says, “I could tell he was a bright engineering student, and it’s been really gratifying to see he’s having a great career at BioMarin and has progressed up the ranks.”

James Osborne, the Robert E. Finnigan Professor of Applied Life Sciences at KGI, was the faculty advisor for a Team Master’s Project (TMP) sponsored by BioMarin early in Lester’s tenure at the company.

Recalling Lester’s involvement, Osborne says: “It was a well- designed collaboration, and the KGI team benefited from having a liaison at BioMarin who was very familiar with what a TMP could accomplish. I think Tom would get top marks for his preparation for industry, and he’s been very successful.”

Lester believes his own TMP experience as a student in KGI’s Master of Business and Science (MBS) program influenced his success at BioMarin.

“It gave me exposure to product development,” he says. “Taking a pharmaceutical development class was also an eye-opener for me. It really made me well suited for the job I have now. I knew how to see the perspectives of different functions and integrate them.”

“Taking a pharmaceutical development class was also an eye-opener for me. It really made me well suited for the job I have now.” – Tom Lester

KGI didn’t offer courses on rare disease therapies at the time Lester was a student (although now KGI has a Center for Rare Disease Therapies and a Rare Disease Club), but he had gained an introduction to the topic while working in a LA BioMed lab at the Harbor UCLA Medical Center between his undergraduate and graduate studies.

Now with more than a decade at BioMarin, Lester says, “I don’t think I’d ever work outside rare diseases again. It’s very tangible. You have a unique opportunity to see the people affected by the disease.”