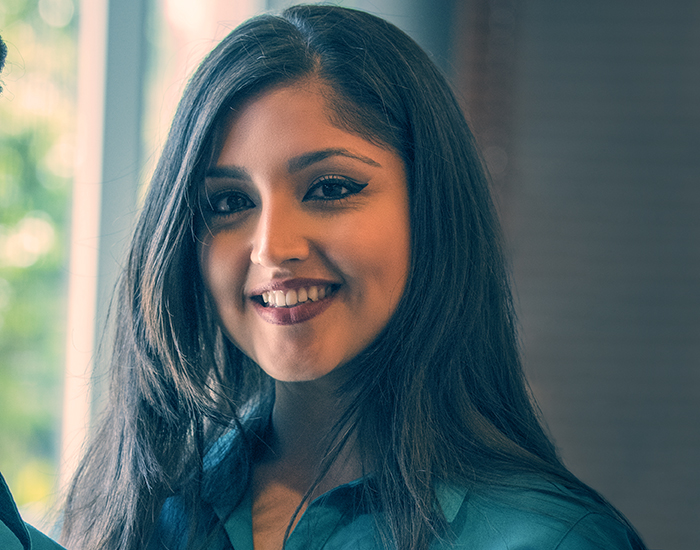 CLAREMONT, Calif. – Sandra Sanchez, PharmD ’20, never saw herself as a leader. But this changed when her Keck Graduate Institute (KGI) classmates in the Doctor of Pharmacy program nominated and chose her to become president elect of the school’s chapter of the Student Society of Health-Systems Pharmacists (SSHP) for 2017–2018.

Success in that role and as president the following year has now earned her wider notice: In September, Sanchez was the KGI student chosen to receive the Student Leadership Award from the California Society of Health-Systems Pharmacists (CSHP) for 2019. The award is given to one student from each of California’s pharmacy programs, with selection based on criteria such as exemplary leadership and a demonstrated history of promoting the pharmacy profession to students.

“Getting an award is just amazing,” says Sanchez. “It was unexpected and feels really good.”

The KGI faculty advisors to the SSHP, Robert Stein and Christine Cadiz, were not at all surprised that Sanchez was honored for her leadership efforts. Stein points to her commitment to involving SSHP members in the community and her instrumental role in the student group’s recognition as a chapter of excellence. Cadiz notes that Sanchez inspires other students to participate fully in educational events and has an extensive history of collaborating with other student organizations at KGI.

“Sandra is a model student,” says Cadiz, who is also familiar with Sanchez as a student in her therapeutics classes and the Advanced Residency Training program.

“She’s not just strong academically, but is also able to always put her best foot forward and represent KGI in a positive and professional manner.”

Though Sanchez didn’t discover her capabilities as a leader until she arrived at KGI, she was already confident that pharmacy was the right career for her. When she was young, Sanchez had accompanied her grandmother to the pharmacy and was impressed by the smiling, helpful, and knowledgeable professional she saw there. Later, as an undergraduate at California State University Long Beach, she began volunteering at a retail pharmacy.

“That solidified my desire to go into pharmacy,” says Sanchez, who has since worked for an independent pharmacy for five years. “I love the science behind it, and that I can really help the community. I’m interested in the clinical aspects as well.”

Her interest in working in a clinical setting has grown as Sanchez has moved through the rotations that are part of the PharmD program’s advanced pharmacy practice experiences (APPE). She has already completed an APPE rotation in general medicine at Pomona Valley Medical Center and is now starting another at Palomar Health, this one focused on continuum of care.

“Acute care, oncology, and transitions of care interest me right now,” says Sanchez. “I hope a residency will lead me to a pharmacy specialty.”

But first she needs to be a successful applicant to a pharmacy residency program. Both Stein and Cadiz believe the CSHP Student Leadership Award will help Sanchez achieve this goal.

“I think a leadership award is a good predictor of how far a student will go in the profession,” says Stein.