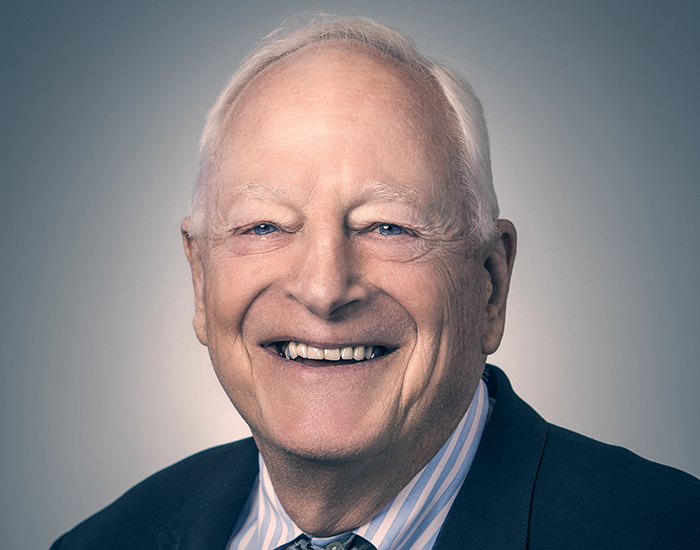 Dr. David Lawrence, dean of Keck Graduate Institute (KGI)’s School of Community Medicine, announced his decision to step down from his role as dean to spend more time with his family, including four children and nine grandchildren. In his short time at KGI, he has been instrumental in developing the Master of Science in Community Medicine (MSCM) program, which is key to his vision of creating a more equitable healthcare system that meets the needs of all citizens—particularly those living in underserved communities.

“Dr. Lawrence has worked tirelessly on his vision of developing the MSCM program and laying the groundwork to change the future of healthcare delivery,” said KGI President Dr. Sheldon Schuster. “From the bottom of my heart, I thank him for his dedication and effort to KGI.”

As the CEO and Chairman of the Kaiser Foundation Health Plan and Hospitals from 1991 to 2002, Lawrence championed patient safety and healthcare reform. He believes that one of the fundamental issues in national healthcare stems from a disconnect between healthcare workers and the individuals they serve.

“We don’t train professionals who are prepared to go into the community to work hand-in-glove with the community members, identify the issues of importance to them related to their health and well-being, and then take action to address these issues,” Lawrence said.

Thus, one of the goals of the MSCM program is to foster strong positive relationships between healthcare workers and community members. To this end, KGI is focused on recruiting MSCM students from underserved and underrepresented communities.

“Through an initiative called Elevating the Safety Net, L.A. Care has committed to recruiting new physicians into underserved communities in L.A. County, and the grant to the KGI program furthers that commitment,” said John Baackes, L.A. Care CEO. “The program is a pipeline for physicians who are passionate about serving low-income communities of color. L.A. Care members will benefit from the high-quality, culturally competent care the students will one day provide.”

Having healthcare workers from similar backgrounds and ethnicities as the individuals they’re serving is crucial for establishing trust. Studies have shown that black women tend to have significantly better outcomes with their births if a black physician delivers them. According to Lawrence, the same phenomenon applies to community medicine.

“Establishing this trust is very challenging—as anyone who’s done community work knows—but when you can make it work, it’s fascinating, and it has an impact on the health of a community,” Lawrence said.

The MSCM program will focus on intervention and disease prevention to improve community health.

Instead, these influences come from social determinants of health such as race, economics, and environment. Access (or lack of access) to safe housing or income security can significantly impact health individually and in the community.

Community medicine is not meant to replace the traditional medical care system but rather to work in tandem with it.

“When you’re sick or injured, you need the hospitals and emergency rooms to treat you,” Lawrence said. “But there are also many things we can do to improve health by reducing the prevalence of preventable illness and the burdens of illness.”

The goal of the MSCM program is to prepare individuals to work directly in a critical area of need in the country. This differentiates community medicine from public health, which focuses more on laws and regulations.

“We wanted to be in the midst of communities where people live and work—where there is the most glaring need for help,” Lawrence said. “So we’re preparing students to work directly in these communities or go on to medical, dental, or PA school if they choose.”

“We want to give them the background and rigor needed to be healthcare delivery professionals while becoming better at doing that work than they would be if they studied geometry, calculus, or physics, which are the traditional ways of getting into medical school but have little to do with the practice of medicine.”

Lawrence is looking forward to spending more time with his children and grandchildren, who range in age from five to 20. He also plans to continue acting as an informal sounding board for the MSCM faculty.

“It’ll be exciting to see how this program develops over the next decade,” Lawrence said. “When you get to this stage of your career, you don’t expect to have an opportunity like this. I’m very grateful that Dr. Schuster and the Board of Trustees asked me to take this on and gave me the freedom to develop something that I think will be very important for healthcare in the future. KGI has been a wonderful home for this program.”

A national search for KGI’s new School of Community Medicine dean is underway.