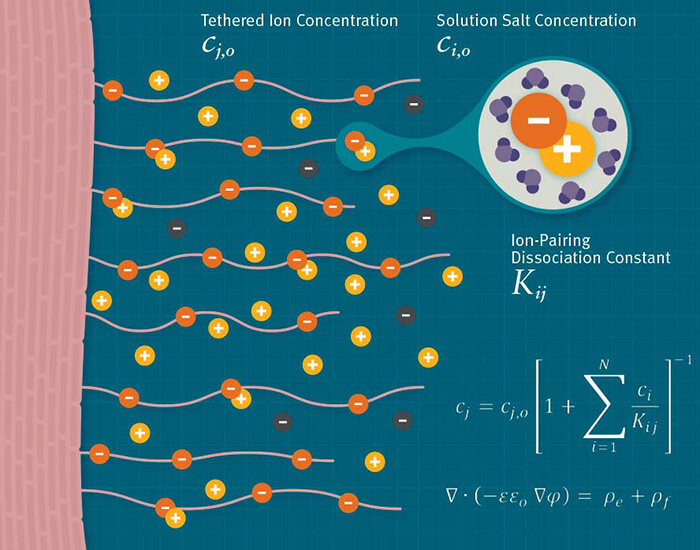 The importance of ions, or electrolytes, in human health is well known, but the exact role these ions play in biology is more complicated than previously thought. Complex sugars known as glycans, which coat the surfaces of cells and mucosal surfaces, are some of the most negatively charged molecules in biology. In our nose, throat, eyes, lungs, and GI tract, these surfaces play an important role in protecting the body from pathogen invasion and exposure to the environment.

The paper “A Continuum Model of Mucosa with Glycan-Ion Pairing,” was published Jan. 15 in the journal Macromolecular Theory and Simulations.

While positive and negative charges are attracted to each other, two different ions (say, sodium and potassium) with the same charge do not interact in the same way with the same negative ion, and the nature of these differences is called lyotropy.

“A key implication of these subtle differences is that glycans interact in unique ways with each type of ion,” says Sterling. “Specific differences in the way that ions pair with counterions can cause large changes in both the electrical potential and the thickness of the protective layer on cells that prevent pathogen attachment and invasion. A complex interaction exists between attraction and repulsion as the charges move in response to each other, both positive and negative. Surprisingly, the surface structures can be very different for different ions, even if the same number of ions are present.”

In mucosal surfaces, such as the lung, the mucus is comprised of negatively charged polyelectrolytes called mucins that are very sensitive to changes in ions. In patients with cystic fibrosis, for example, the genetic defect in the CFTR gene reduces ion transport, which causes the mucus to be thick and viscous. Baker and Sterling describe how the thickness of the mucosal layer and its electrical potential are modified by changes in ion type (carboxylates or sulfates on the mucins).

“The understanding of how each type of ion affects the structure, electrical potential, and fluid behavior of the airway-surface layers in the lung has direct implications for designing drug targets that influence pulmonary behavior,” notes Baker.

The paper contemplates ion interactions and electrical potentials in a variety of biologically important hydrogels and cell surfaces, and incorporates specific ion-ion interactions for each ion pair type. This work follows a 2017 publication by Drs. Baker and Sterling in Colloid and Interface Science Communications, titled “Electro-lyotropic equilibrium and the utility of ion-pair dissociation constants,” establishing the feasibility of these models for biohydrogel structure determination.

Professor Sterling also presented aspects of this work at KGI’s 13th Annual Research Retreat on Jan. 12. His presentation may be viewed through the following link:  Partitioning and Pairing in Biology.

Keck Graduate Institute (KGI) was founded in 1997 as the first higher education institution in the United States dedicated exclusively to education and research related to the applied life sciences. KGI offers innovative postgraduate degrees and certificates that integrate life and health sciences, business, pharmacy, and genetics, with a focus on industry projects, hands-on industry experiences, and team collaboration. A member of The Claremont Colleges, KGI employs an entrepreneurial approach and industry connections that provide pathways for students to become leaders in applied life sciences and healthcare.

Synedgen Inc. is developing a new class of drugs with the ability to suppress inflammation, reduce infection and improve healing in the gastrointestinal tract and pulmonary tree and to reduce damage and inflammation due to chemical, radiological or physical damage using the science of glycomics – the study of complex sugar structure and function. Synedgen uses its Glycomics Technology Platform (GTP) to discover and develop ultra-purified glycopolymers that enhance and mimic the innate immune system by targeting the cell surface glycocalyx and mucosal surface. Synedgen has successfully leveraged the GTP to develop marketed Prisyna oral care and Synedgen wound care products, as well as SNSP113, which has been licensed to Synspira and is currently in clinical development for the treatment of cystic fibrosis. Synedgen has established research and manufacturing facilities in Claremont, CA. www.synedgen.com.