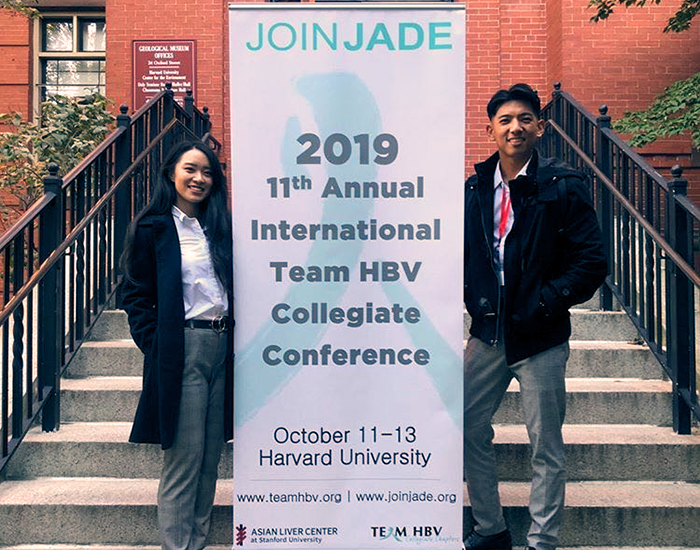 People infected with the Hepatitis B (HBV) virus may experience no symptoms, but their livers are being damaged. That puts them at high risk for deadly diseases such as cirrhosis and liver cancer. Though anyone can contract HBV, which can be transmitted via blood or unprotected sex, or at birth, Asians and Pacific Islanders have the highest mortality rate.

Maxine Yang, PPC ’19, MBS ’20, is well acquainted with the potential effects of HBV. She explains that a doctor informed both her parents soon after they emigrated from Taiwan that they had tested positive for the infection. Fortunately for Yang, they then protected their children from risk through vaccination at birth.

“My parents made me aware of HBV and motivated me to do something about it,” says Yang, a student in the Master of Business and Science (MBS) program who founded the Keck Graduate Institute (KGI) chapter of Team HBV.

Yang was an undergraduate when she first became involved with this international group of volunteers with a mission to raise awareness about HBV and liver cancer. She launched a Team HBV chapter at the University of California, San Diego, and later replicated it at KGI, where she has formed a board of six students and attracted many more to participate in outreach events in the Claremont area, Los Angeles, and Orange County. Working alongside volunteer physicians and nurses, KGI’s Team HBV has helped educate and screen underserved community members.

“Just last year, our chapter screened 400 patients,” says Yang. “We tell patients to inform their friends and families, too, so we like to imagine that our reach is in the thousands. It’s humbling to think that, as students, we can make this impact.”

Now Yang is striving to make an even bigger impact. She was a member of the winning team in the advocacy hackathon at the 11th Annual International Team HBV Collegiate Conference held at Harvard University in October. Her team came up with the idea to spread HBV awareness and increase support through a social media campaign modeled on the ALS Association’s popular Ice Bucket Challenge.

“Our challenge is called Three Shots for Life because a person needs three shots over six months time to be vaccinated against HBV for an entire life,” explains Yang. “In the coming year, we’ll roll it out across campuses with Team HBV chapters. There are more than 30 nationally and also some international chapters.”

Yang was joined at the conference by another KGI Team HBV board member, Derrick Sy, PPC ’19, MSMDE ’20, who serves as the chapter’s vice president for recruitment and training. Attending for the first time, Sy was surprised by the emphasis on advocacy.

“Most of my experience with Team HBV was outreach,” he explains. “But I learned that instead of just going to a church or a festival, it’s important to spread the word to make even more of an impact. Elected officials can pass legislation, designate resources, and get support for a cause. A lot of funding is needed to have proper screenings, and the resources aren’t distributed optimally.”

Sy became involved with Team HBV at Yang’s urging, but he had already demonstrated interest in addressing the health needs of underserved communities by volunteering at a diabetes clinic in Pomona, where he worked with a primarily Latino population.

“I never knew there were outreach opportunities with my own Asian American and Pacific Islander community, so when Maxine contacted me, I was excited,” says Sy, whose heritage is Filipino. “I’m happy and grateful to have joined the organization, and the more I become part of it, the more I realize how important it is.”

Now that they have returned from the conference, Sy and Yang are looking at ways to expand their chapter’s advocacy efforts. They and the rest of the Team HBV board are focused on increasing advocacy events in the local area and training members who will call and write to state and federal legislators.

“Working with underserved communities gives us more perspective, so we can express our opinions in a personal way that makes more of an impact,” says Yang.

She is also working to ensure that KGI’s Team HBV chapter continues after she and Sy graduate and move forward with their intention to attend medical school. Yang is hopeful that the board member she is preparing to take her place shares her excitement about the Team HBV mission.

Yang is certain her own commitment to helping prevent HBV infections will remain strong in the future.

“When I go to medical school, if there are neighborhoods nearby where Hepatitis B is prevalent, I plan to start a chapter again or work with another organization,” says Yang, mentioning the National Task Force on Hepatitis B.

Sy also sees his experience with Team HBV as influencing his plans once he completes the Master of Science in Medical Device Engineering (MSMDE) program.