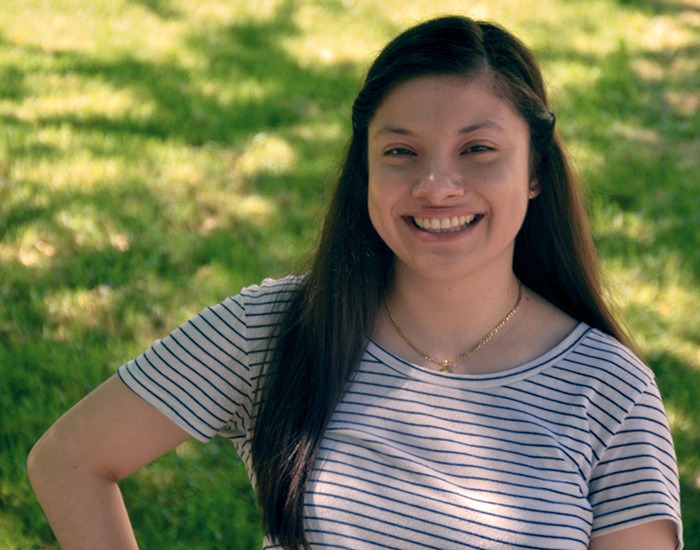 Keck Graduate Institute (KGI) incoming student Angie Aceves, PharmD ’25, is the youngest of four girls. Though Aceves is the first in her family to pursue a career in science, her three sisters are all accomplished professionals in their respective careers (a lawyer, school principal, and education administrator) and have provided inspiration and guidance.

“Growing up, seeing their successes and mistakes guided me through life and helped me forge my passion,” Aceves said. “Along with my parents, they offered moral support and helped me navigate through college and now grad school.”

Aceves received her bachelor’s in Biochemistry from Mount Saint Mary’s University – Chalon, a small liberal arts college in Los Angeles. In the summer of 2020, she attended KGI’s Pre-Pharmacy Enrichment Program (PrEP), a five-day program where prospective students explore the pharmacy profession through interactive classes and activities.

“Even though the program was virtual, it still felt very hands-on,” Aceves said. “For the labs, they sent compounding kits to our homes, and it was cool because I was in my room doing all of this.”

For Aceves, learning how to compound drugs provided a more expansive view of pharmacists’ many roles.

“The compounding goes on in the back of the pharmacy, so all you see when you go pick up your medication is the person handing you the finished product,” Aceves said. “You don’t see what goes into making the capsules.”

This experience, along with a workshop with Professor of Practice Dr. Daniel Kudo, provided insight into industry-related careers within the pharmaceutical field. Based on a career assessment quiz recommended by a KGI student during a PrEP panel, Aceves now has a clearer idea of potential avenues she might pursue and is considering either clinical trials or research and development.

Professor of Clinical Sciences Dr. Talia Puzantian further broadened her perspective of career avenues by discussing clinical psychopharmacology in her lecture, “Treatment for OUD and Pharmacists’ Roles.” Another highlight was a workshop from Associate Professor of Biopharmaceutical Sciences Dr. Derick Han. He gave a thorough explanation of drug design and allowed her to connect those principles with the concepts she was learning in her physiology class at the time.

Aceves decided to apply to KGI’s School of Pharmacy and Health Sciences after visiting KGI in the spring of 2020. She was drawn to the school’s small size and opportunities for industry connections. One pivotal moment was meeting a KGI alumna who had also graduated from Mount Saint Mary’s.

“Because it’s a small college, I would not expect someone to have gone,” Aceves said. “As it turned out, she researched with my academic advisor. When it came time to decide which Doctor of Pharmacy (PharmD) program I wanted to enroll in, I kept going back to that visiting day and how I felt so welcomed.”

“One of the reasons why I chose KGI was that sense of community.”

One concern that Aceves had was that she had not followed the typical path of a pharmacy student. She had never worked in a pharmacy technician role but instead discovered that she wanted to pursue a career in pharmacy through research.

However, after speaking with Associate Dean Bernard Tyrrell, she saw how her non-linear path was not a hindrance but an asset to the pharmaceutical industry.

“To decrease healthcare disparities, you need healthcare workers who represent the community that they serve, so it’s great that KGI highlights these stories and shows other non-traditional students who might be interested in pharmacy that they have a chance,” Aceves said.

Tyrrell also supported her interest in pursuing KGI’s PharmD Medical and Clinical Affairs Certificate, explaining how the certificate provides a solid foundation for learning about the industry, preparing her for the many avenues that could be pursued without limiting her prospects.

“KGI is a unique institution,” Tyrrell said. “As a newer pharmacy school, we can adapt quickly to what the healthcare marketplace is demanding from future pharmacists. Many of the faculty have spent time as pharmacists practicing in non-traditional roles before coming to KGI and academia. This gives us a broader perspective of how we can educate, train, and mentor our students so they become invaluable leaders in a changing healthcare environment. Students like Ms. Aceves who have an awareness of the roles pharmacists can play in non-traditional settings are an excellent addition to our growing student body.”