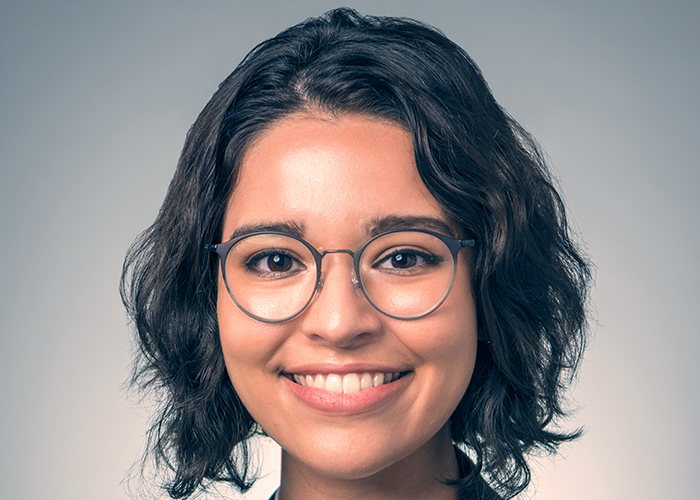 For Carolina Moraes de Souza, MEng ’21, attending Keck Graduate Institute (KGI) has been a surprisingly smooth transition from her undergraduate university in her hometown of Rio de Janeiro, Brazil. Her school was one of the smallest federal universities in Rio, and she was able to have one-on-one interactions with the professors.

“When I came to KGI, it was amazing because it was exactly the same setting,” Moraes de Souza said. “Professors have their doors open all the time so you can schedule a time to talk to them, just like back home. I also like that for most professors in the MEng program, you can call them by their first name.”

This welcoming attitude helped her with the transition. She was initially nervous about mastering and having to give presentations in a foreign language, but eventually, she relaxed because everyone was so friendly.

She considers George B. and Joy Rathmann Professor in Bioprocessing and Director, Amgen Bioprocessing Center Sue Behrens, also the Master of Engineering in Biopharmaceutical Processing (MEng) Program Director, as one of her mentors and appreciates how Behrens always makes time for her.

“If you want to talk about a career, she’s really open and has great experiences,” Moraes de Souza said. “She worked in the industry for 25 years, so she has a lot to share.”

Other mentors include MEng professors Saurav Datta and Hu Zhang, whom she cites as being great professors, approachable, and always willing to help. Another mentor is Michael Koeris, a new faculty member. Moraes de Souza is a TA for his Molecular Biology and Biotechnology class.

“He’s working on the NIH RADx COVID-19 Response Program, and he’s also the board of director for multiple startups,” Moraes de Souza said. “I don’t know how he does it, but he’s really approachable as well and really sharp.”

One of the most valuable experiences for Moraes de Souza since attending KGI was learning to work in teams, particularly through the Team Master’s Project (TMP) and Team Design Project (TDP).

“Learning how to give people feedback and address conflicts when they happen has been great because when you have a job, you don’t work by yourself,” Moraes de Souza said.

Unlike some MEng students, Moraes de Souza did not have an engineering background prior to KGI. She was apprehensive about learning the mathematics and physics involved, but her professors stepped in to help her whenever she needed it.

“I learned a lot in the first year,” Moraes de Souza said. “For the first module, the students that came from Life Sciences backgrounds had a lot of math and engineering classes, and I feel like that was great because it got me up to speed in the concepts I had to learn for being able to do all the calculations. Now I’m much more confident about it.”

Moraes de Souza has a background as a singer and still loves to sing and play the keyboard for fun. For her career, she hopes to go into the business management side of the bioprocessing industry, possibly pursuing consulting or venture capital.

“I think I want to be more on the investment side where the ideas are coming,” Moraes de Souza said. “That would be exciting being able to brainstorm with the people that are inventing new products to address the needs of patients.”

Now, Moraes de Souza is a tutor and peer mentor at KGI.

“Carolina is a very driven student who is always willing to help and give back,” said Catharyne Magro, Admissions and International Student Advisor. “I am excited to see her continued growth as she moves toward graduation and begins her career.”