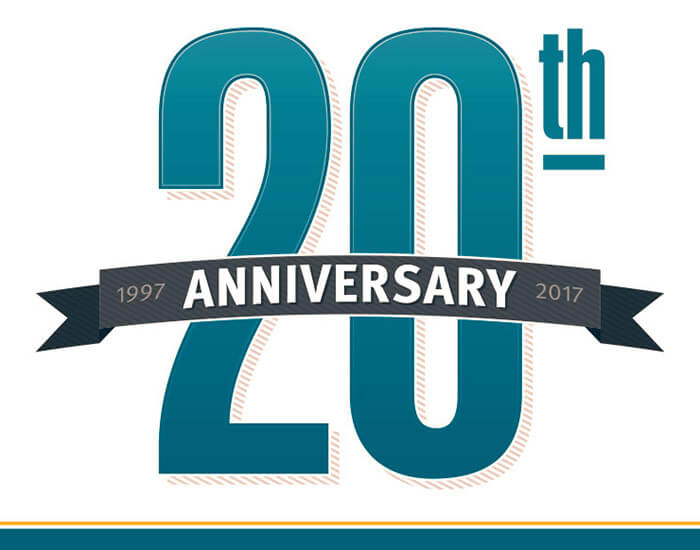 Reflecting on its tradition of developing professional leaders and looking ahead to a promising future, Keck Graduate Institute (KGI) is starting a year-long celebration of its 20th Anniversary, from July 2017 through June 2018.

Twenty years ago, in July 1997, the W.M. Keck Foundation provided a $50 million founding gift that transformed KGI from a dream into a reality. Today, KGI graduates continue to serve as a momentous workforce within the bioscience and healthcare industries.

KGI’s story begins in 1995 when the late Henry E. (“Hank”) Riggs, president of Harvey Mudd College since 1988, gathered a team to contemplate a “new venture.” He envisioned a stellar new institution in The Claremont University Consortium that would be innovative in higher education, productive for our nation and the region’s economy, and beneficial to our society in solving critical problems related to the emerging field of biotechnology.

That dream became a reality just two years later. Riggs departed Mudd in 1997 to become the founding president of KGI. He was a visionary who could see that the next century would be ruled by the life sciences and knew it was important to educate its leaders in novel ways.

KGI’s pioneer program—Master of Bioscience (MBS)—began its first classes in 2000 and conferred its first degrees in 2002 with an inaugural graduating class of 28.

After eight years of guiding the “new venture,” Riggs retired in 2003 and Sheldon Schuster became KGI’s second president. Guiding accelerated growth for KGI, Schuster put together plans for an additional set of innovative programs. In 2004, the W.M. Keck Foundation made a $20 million grant, challenging KGI to raise an additional $30 million over seven years. KGI completed the challenge one year ahead of schedule.

“The initial approach of this institution led to innovative degree programs that are team based, hands on, and real world,” Schuster says. “That vision is alive today and it’s incredibly unique and special.”

Beginning in 2006, the PhD in Applied Life Sciences became the second program offering, later joined by the Postdoctoral Professional Master’s (PPM) in 2009 and Postbaccalaureate Premedical Certificate (PPC) in 2010.

In August 2014, the School of Pharmacy opened its doors with a novel program model that filled the need to educate leaders for the growing pharmacy industry and changing clinical practice. The Doctor of Pharmacy (PharmD) program will enroll more than 300 students in the fall of 2017. The School of Pharmacy will celebrate its first commencement ceremony toward the end of the 20th anniversary in May 2018.

“It’s a wonderful coincidence that the 20th anniversary for KGI and the year that we graduate our first pharmacy class occur at the same time,” says School of Pharmacy Founding Dean Kathy Webster. “It is a milestone for both the institute and the School of Pharmacy. We want to celebrate that and acknowledge all of the hard work, planning, and vision that went into it. Then, we’ll move on to the next chapter of this exciting adventure.”

The Minerva Schools at KGI enrolled its first class of students in September 2014, offering an innovative undergraduate program that combines four years of world travel with rigorous, interdisciplinary study. Minerva’s integration with KGI has been particularly helpful in building assessment, active learning, and distance learning components.

One of the more recent additions to KGI’s repertoire is the Master of Engineering (MEng) in Biopharmaceutical Processing in 2016. And thanks to a $1.5 million gift from Amgen, a pair of degree programs will enroll their first cohorts within the School of Pharmacy in fall 2018: Master of Science in Human Genetics and Genetic Counseling (MSGC) and Master of Science in Human Genetics and Genomic Data Analytics (MSGDA).

From its inception, KGI was committed to robust ties with industry.  Since then, Schuster and other campus leaders have cultivated a strong board of trustees, composed of 26 leaders in industry, health care, and education, and several advisory boards that assist in keeping the curriculum and services current to support the career success of KGI students and graduates. The Team Master’s Project has steadily grown in popularity, and the 29 projects completed through 2016-2017 represent the most in KGI history.

“We are growing very steadily right now,” says School of Applied Life Sciences Dean Steve Casper. “Our brand is expanding and we’re getting outstanding students from all over the world. KGI will increase its impact dramatically in the next few years.”

Through the 2016-2017 academic year, KGI started the shift from a commuter campus to a residential setting. The community celebrated a ribbon cutting at 1 North Indian Hill Blvd. in Claremont in November 2016;  the new space includes administrative offices and student collaboration areas.

In March 2017, KGI opened its first full-service café. Then in May 2017, the KGI and Claremont communities rallied together to break ground on the school’s first housing complex. The 225,000-square foot facility is set to open in fall of 2018.

As part of the 20th Anniversary, KGI President Sheldon Schuster and other campus leaders are planning several tour stops as part of a “KGI@20 On the Road” series to connect with alumni, corporate partners, and other friends of KGI. As the schedule is nearing completion, please call the Advancement Office at (909) 607-0113 if you are interested in attending.

With dynamic flexibility, KGI continues to meet society’s ever-changing needs. Whether this means researching vaccines for potential deadly new viruses or developing products to enhance human welfare, KGI students and faculty are a key part of the process that shapes the future of bioscience and healthcare. KGI instills a sense of readiness in its students to solve world problems, and students continue to meet that expectation.