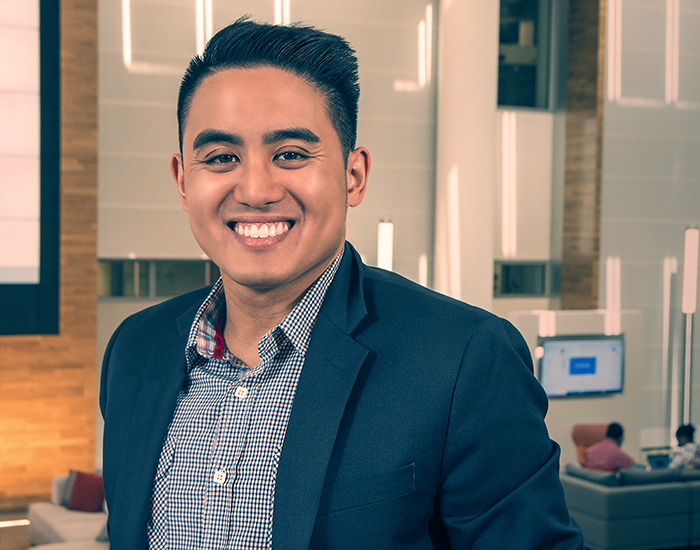 CLAREMONT, Calif. – Lawrence Maddela, MBS ’18, PPC ’17, has a way with words, whether he is drafting a submission to the U.S. Food and Drug Administration (FDA) or the lyrics to hip-hop music. He has shown his skill in both during his clinical and regulatory affairs development program at Edwards Lifesciences, the world leader in heart valve and critical care monitoring technologies. Maddela’s writing contributed to approval of the company’s PASCAL transcatheter valve repair system in Europe. He also created a rap music video about Edwards that its CEO presented at an all-employee meeting.

“It was one of the best days of my life. I’ve been rapping for over a decade now, and this was the culmination,” says Maddela.

He got his start in music as a young child, playing the piano. Maddela later realized he had a talent for writing rhymes and began recording and performing rap music. Meanwhile, he was on track to follow his father into medicine. A premedical student at the University of California, Los Angeles, Maddela gained exposure to a medical center environment at UCLA Health and won an award for a song he composed there.

Then he headed to KGI for the Postbaccalaureate Premedical Certificate (PPC) program. When Maddela decided to stay at KGI for the Master of Business and Science (MBS), he ended up discovering a field he preferred to medicine and learning about Edwards.

“I paid close attention to the classes I liked and realized clinical and regulatory affairs was most exciting to me.”

“Regulatory is very language-based. We’re the communicators. We’re liaisons between our coworkers and the FDA,” says Maddela.

Maddela also explains his attraction to the rotational program at Edwards, saying, “I like the technology. We’re really innovative and all about the patient. We’re able to do therapy without surgery. It’s minimally invasive, and the recovery time is so much better. Heart disease is rampant, so the impact we make is tremendous.”

So far, Maddela has completed a regulatory affairs rotation and turned his attention to clinical affairs. His work includes conducting analyses that compare standard operating procedures at Edwards to those in six other countries.

For his third and final rotation, Maddela will return to the regulatory affairs team, which has already offered him a job when his two-year program ends.

“When you work well with people and you love science and are good at it, life after KGI is going to include some major opportunities,” says Senior Director and Instructor of Postbaccalaureate Programs Joon Kim, noting how Maddela’s KGI education introduced him to new ways of using the life sciences to help people that suited his outgoing personality and creative nature.

Expressing that creativity through rap continues to be part of Maddela’s experience at Edwards. Currently, Maddela is working on a video on clinical trials with the company’s marketing team. “Whether I’m writing submissions to the FDA or writing rhymes for an audience, I like the freedom to write with power and conviction to convey a message and tell a story,” says Maddela.

Maddela’s music video about Edwards Lifesciences that was presented at an all-employee meeting:

God I’m speechless and SO thankful!! Shoutout to my company CEO for the surprise presenting my MV at our all-employee meeting! 🙏 To my videographer 🎬 @_timothytran this would not have been possible without you brother. Being in this rap game since junior high, I’ve always dreamt of finding a way to intertwine my love for hip-hop into my regulatory career. It took me years to refine my delivery, flow, multi-syllablistic rhymes, and production to get me to this point. Mighty thanks to everyone who’s been rockin’ with me since then. Tim and I have now been contacted by 4 other business units to create music videos for them as a side-hustle. Hoping this serves as proof and motivation that you can do ANYTHING you’re passionate about and incorporate it into your careers. Your goals are not silly or nonviable. An idea you devise can only come to fruition if you BELIEVE in it and most importantly in yourself!