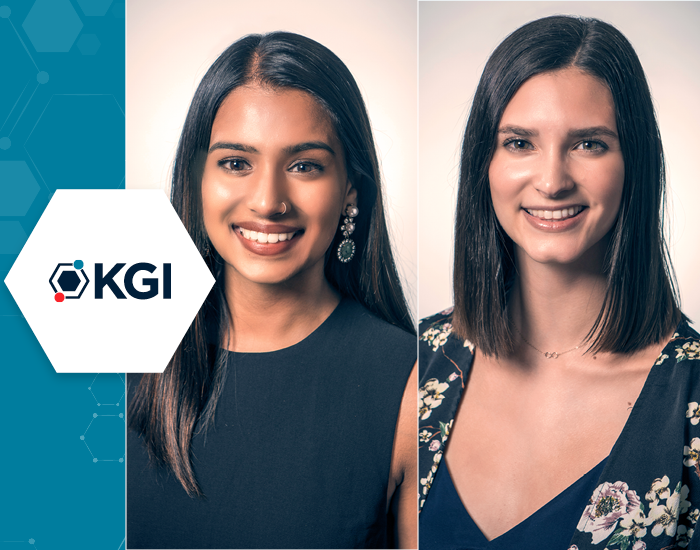 Shabri Patel and Alexandra Petrasek, who recently received their graduate degrees from Keck Graduate Institute (KGI)’s Master of Science Human Genetics and Genetic Counseling (MSGC) program, have both obtained positions as genetic counselors at Fulgent Genetics. They work primarily in a lab setting, interpreting results from genetic testing that can help individuals assess the risk of inherited conditions that can impact their health or their children’s.

Patel, MSGC ’20, initially wanted to become a doctor but soon found herself gravitating toward more niche medical careers. As a pre-medical undergraduate, she excelled in Statistics, Psychology, and especially in her first upper division biology class, Intro to Genetics.

“I was trying to figure out, ‘How can I marry all of my interests?'” Patel said.

Her path eventually led her to KGI’s MSGC program.

Petrasek, MSGC ’20, on the other hand, became interested in genetic counseling early on.

“I actually learned about genetic counseling in my high school biology class, which is unheard of,” Petrasek said. “I got lucky in that I had a teacher who felt strongly about sharing that with the class, and I thought it was the coolest thing I’d ever heard of.”

As an undergraduate, Petrasek got a psychology degree with a pre-health track specifically to fulfill the requirements for a genetic counseling program. She had originally planned to work in patient care, but after doing a KGI industry rotation at the Children’s Hospital Los Angeles lab, her positive experience compelled her to pursue a job in industry, which led her to Fulgent.

Patel completed an industry rotation at Fulgent in April after she was hired, as she was displaced from her initial rotation placement due to COVID-19 restrictions. Fulgent graciously made accommodations to take her as a student. Though she had originally planned to work in a pediatric clinical setting, Patel applied for the position in early March because she felt drawn to the company’s mission and ethics.

“They have something that I’m very passionate about, which is bringing awareness and accessibility to underrepresented groups,” Patel said. “Even if I am not working directly with patients, I still feel like I am making an impact in this role.”

What Patel valued most about KGI’s MSGC program was the intimate learning environment, where she could get to know her professors and classmates. She also enjoyed the networking opportunities, meeting genetics counselors of many different specialties who spoke in the classes.

For Petrasek, a highlight of her KGI experience was writing her thesis on pharmacogenomics for psychiatric drugs and psychiatrists’ general genetics knowledge. She found the process to be unexpectedly enjoyable.

“I had a really wonderful thesis advisor—Professor of Clinical Sciences Talia Puzantian—and I actually learned as much about myself as I did about the topic,” Petrasek said.

“She taught us complex genetic concepts and skills that I thought I would never fully wrap my head around, like variant curation, which is now a large part of my day-to-day,” Patel said.

“We use the skills she taught us every single day,” Petrasek added.

“I also have to give a shout-out to MSGC Program Director Ashley Mills who built this program from the ground up. It is what it is because of how she put it together.”

Patel is grateful to MSGC Associate Program Director Emily Quinn for providing support and guidance to her as a faculty mentor and thesis advisor.

For Patel and Petrasek, the Professional Development Class was formative in shaping their trajectory.

“I think part of what made it so amazing was that it was new, and we had the opportunity to shape it,” Petrasek said. “Every faculty member would ask us, ‘What do you think you need?'”

Now they are eager to begin a new chapter in their lives as genetic counselors at Fulgent Genetics.

“We both are committed to service to others and continuous learning and improvement,” Patel said. “The company is growing day by day. It’s an exciting place to be, especially in a field that is still in its infancy.”