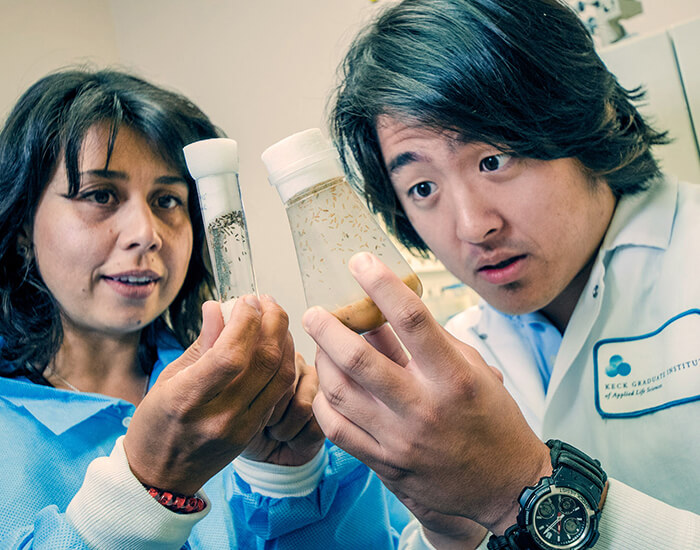 KGI recently opened its first Biosafety Level 2 Drosophila laboratory, which supports the infectious diseases research of faculty mentor and advisor Anastasia Levitin, PhD and KGI PhD student Kevin Kim. Commonly referred to as fruit flies, Drosophila is a genus of small flies belonging to the family Drosophilidae that has historically been used in research related to genetics and developmental biology. Dr. Levitin and Kevin are utilizing this established insect model organism as a surrogate host and are trying to determine if their findings can lead to meaningful developments in therapeutic treatments against infectious agents for humans.

Specifically, Dr. Levitin and Kevin are interested in studying the interactions between microbial pathogens and Drosophila, as well as the fly’s innate immune response to infections by different bacteria and fungi. Because fruit fly proteins that mediate innate immunity are highly similar to those in humans, Drosophila serves as a useful model organism to develop therapeutic interventions.

“There are many benefits in using this model organism in the laboratory,” explained Kevin, who is in charge of the fruit fly lab. “It has a simple diet, has a short life cycle, and the genetic research is robust and is highly translatable to mammalian systems.”

Building on this, Dr. Levitin further explained the choice to work with this particular species. “Given that Drosophila melanogaster has conserved genetics with humans, it is a well-established model to study innate immune responses. Our goal is to apply this characteristic to study host-pathogen interactions.”

While this is the first time Kevin has worked with this species of fly in a lab setting, it is not his first experience with flies. His fascination with flies began when he was in middle school. “I used to grow them at home for fun because it was fascinating to me to watch them develop from the larvae to pupa to adult flies,” he said. “I fed them rotting banana peels and would observe how they would behave and communicate with each other.”

Now in the depths of his research, Kevin believes his passion for the organism has come full circle and is excited to be taking this passion to the next level. “Now that I am older, I have honed my interests and find the competing interactions between the host and the pathogens fascinating,” he said. Kevin also explained that he hopes this research will be broad enough in scope that it will lead to a better understanding of the interactions that take place upon infection between pathogen and host. “I hope we can translate what we find to practical purposes, from benchside to bedside,” he said.

On a broader level, the opening of the Drosophila lab has the potential to attract students who are interested in incorporating different disciplines of sciences, which include microbiology, entomology, immunology, genetics, and pharmaceutical drug discovery. In addition to Kevin, Alex Zuniga, a pre-pharmacy undergraduate student from Claremont McKenna, and two pre-medical students, Sharon Tran and Josh Zozaya, also work in the lab as research assistants.

The laboratory is a BSL-2 facility, which means strict rules and guidelines must be enforced when conducting research. Laboratory personnel must also have specific training in handling pathogenic agents and are supervised by scientists competent in handling infectious agents and associated procedures. Further, in order to obtain this designation, KGI had to take special precautions to ensure the lab’s safety. Explaining what had to be done in the KGI lab, Kevin said: “During the experiment, flies become infected with pathogens. Due to this, preventative measures were taken. Screen doors were installed and mesh covering air vents on the ceiling were also put in place.”

Kevin first heard about KGI when he was an undergraduate student at the University of California, Riverside. He was referred to President Schuster, who personally contacted him, and was able to gain a better understanding of what KGI offered. After graduating with a BS in biology, Kevin went on to the Master of Bioscience (MBS) program at KGI, where he earned his degree in 2014. Kevin then entered KGI’s PhD program because he felt it was a great opportunity to gain applied research experience that could lead to both meaningful applications and a fulfilling career.

In speaking about his experience at KGI, Kevin said: “KGI has offered an entrepreneurial perspective to my scientific background so that my discoveries in the lab can reach a wider audience. KGI has outlets and opportunities that can allow me to take my research from the stages of discovery to development.”