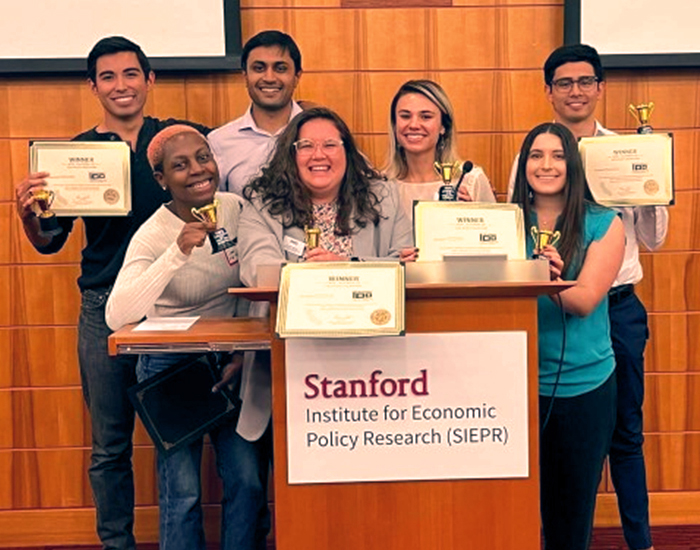 Keck Graduate Institute (KGI) student Anna Capria, MSGDA ’23, along with a team of classmates in the Master of Science in Human Genetics and Genomic Data Analytics (MSGDA) program and one Caltech student, was recently chosen as one of five winners in the California 100 Tech Policy Hackathon.

Their presentation, “Implementing a Genetic Ethics Advisory Committee,” proposed the creation of a committee to help guide state policy and educate key decision-makers on ethical considerations regarding health practices based on genetics.

The hackathon, hosted by the California 100 Initiative and the Stanford Institute for Economic Policy Research, was a full-day, in-person event held at Stanford University on April 2. The event’s goal was to foster and support ideas that improve California government agencies and programs using technology.

During the hackathon, participants developed their ideas with the help and mentorship of subject matter experts, technology leaders, and policymakers, culminating in each group’s final presentation to a panel of judges.

Given the fast-growing nature of genetics, an ethical regulatory committee can help leaders in government, healthcare, and technology navigate the ever-changing nature of this field. Capria initially proposed the idea for this committee in her policy memo “Ethical Issues Surrounding Genetics from Data Storage to Designer Babies,” which she submitted to the California 100 Initiative in January.

The memo outlines key considerations in genetics, such as sequencing the genomes of newborn babies. While this practice could potentially lead to discoveries of new disorders and facilitate early intervention for children with genetic conditions, it also raises issues around data storage and privacy rights.

Another ethical consideration involves the ability to pre-select genetic traits for one’s children. On the one hand, parents could potentially prevent their children from acquiring life-threatening diseases. Still, they could also use this capability to select desirable traits, which raises questions of what constitutes “desirable.” Even disease prevention can be a slippery slope, and determine where to draw the line.

“The committee’s goal is not to solve these issues but to create a space where these conversations can be had,” Capria said.

To navigate these considerations while ensuring equity, Capria proposed that the ethics committee represent people from diverse backgrounds regarding ethnicity, socioeconomic status, and geographic location.

“Having a diverse group of individuals effectively participate in conversations about what the future holds with genomic editing will lead to informed decision-making, impacting everyone’s future,” Capria said.

In late March, fellow KGI student Sohil Joshi, MSGDA ’23, brought up a point in class that sounded similar to Capria’s idea. She invited him to join her team for the hackathon. Over that week, they added fellow MSGDA ’23 students Allan Phillips, Caitlin Caporale, Samantha Irving, and Cimone Jackson to their team.

A couple of days before the hackathon, they further developed their ideas. When they arrived at the Stanford event, they met Caltech student Cristian Ponce, who expressed interest in their concept and contributed to their final presentation.

Their presentation expanded upon the ethical considerations initially brought up in Capria’s memo, citing both past and more recent controversies in genetics. An example of the latter includes “Spit and Acquit,” the Orange County District Attorney’s Office secretive genetic surveillance program which has been collecting genetic data from people charged with misdemeanors since 2007.

As a whole, citizens are largely unaware of how genetic data is collected and stored.

Thus, a Genetic Ethics Advisory Committee would help raise awareness around these practices while developing guidelines for regulating, safekeeping, and ethical storage and usage of genomic data. Such a committee would ideally represent the people of California and include California residents, geneticists, ethicists, data scientists, and regional representatives.

Developing such a committee would require reallocation of public health funds, integrating organizational-level ideas from national research organizations, and pre-meditation of system integration issues such as compliance monitoring.

“We looked at the governor’s budget for this year, and $300 million is allocated for public health initiatives,” Joshi said.

“Because genetics is so important for public health, we think a large amount of that $300 million should be allocated to creating this committee.”

As winners of the hackathon, Capria’s team will receive a prize of $1,000 per person and be placed into working groups with experts and policy leaders to develop their idea further.

“I have been thinking about this idea for a long time and am super excited to see it come to life!” Capria said.

Subscribe to KGI’s e-newsletter
Request program information
Back to all news Passant Shaker Pursues Career in Genetic Counseling to Empower Others to Take Charge of Their Health Previous news story KGI Announces Alumnus Dr. Abasi Ene-Obong as the School of Pharmacy and Health Sciences 2022 Commencement Speaker Next news story