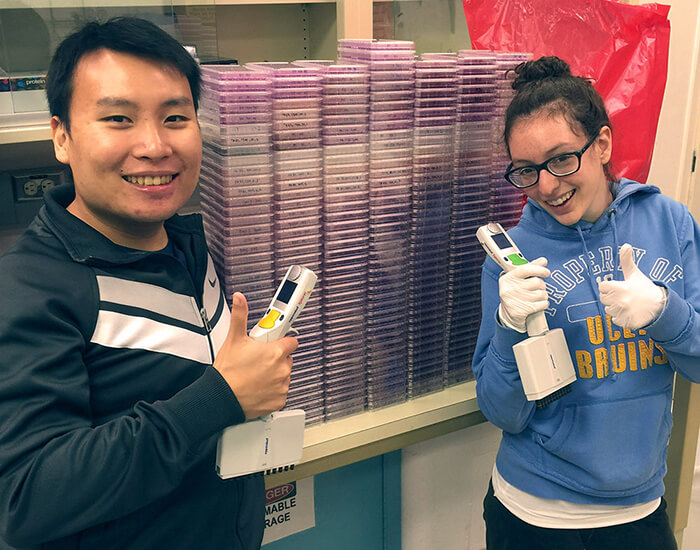 KGI PhD students Leeor Zilbermintz and William Leonardi have co-authored a paper that was recently published on Nature.com, a weekly international, interdisciplinary journal of science that highlights the finest peer-reviewed research in all fields of science and technology.

The article, “Identification of agents effective against multiple toxins and viruses by host-oriented cell targeting” presents research both have completed as KGI students over the past two years. The publishing of this work is a result of a collaborative effort on the part of KGI faculty and students and highlights the strong mentorship students receive from their advisors.

Assistant Professor Dr. Mikhail Martchenko Shilman served as the Principal Investigator (PI) and spent many hours with each student. Specifically, this research examines the repurposing of U.S. Food and Drug Administration (FDA) approved drugs through drug screening that target Host Oriented Therapy. Their findings provide a real world solution to crisis situations caused by Ebola outbreaks and Anthrax exposure. The team discovered that Amodiaquine, a compound used clinically as an antimalarial agent, inhibits both the detrimental effects of multiple bacterial toxins and the entry of Ebola and other viruses into host cells.

William and Leeor’s work is especially timely in that they were conducting research on repurposing already approved FDA drugs as treatments for Ebola during the 2014 epidemic that affected multiple countries in West Africa. According to the Centers for Disease Control and Prevention (CDC) this was the largest Ebola epidemic in history and as of August 29, 2015, has affected thousands of people with 28,101 cases (suspected, probable and confirmed), 15,226 laboratory-confirmed cases and 11,304 deaths.

The MBS program is a two-year residential program that includes course work in both technical and business courses as well as a summer internship and capstone Teams Masters Project (TMP). The TMP serves as an invaluable experience for students in that they are able to acquire meaningful experience in industry through working on real world problems for various sponsoring companies.

Speaking about her decision to enter into the PhD program from the MBS program Leeor explained, “When it came time to pick an internship in the MBS program Dr. Martchenko told me about his anthrax research. At first I was apprehensive, but after doing some really great research in Dr. Martchenko’s lab, I was sold. I knew there were tremendous opportunities for me to focus on a scientific question, and figure out how to solve it. That was really exciting to me. I saw the benefits in gaining more research experience. My whole life I have been interested in how new medicines were made and thought how amazing it would be if I could ‘find’ one for a really serious disease.”

William’s decision to remain at KGI also stems from the positive experience he had as an MBS student. Combining the skill set that he previously learned through the MBS program (in Bioprocess Engineering and Business of Bioscience), along with additional and rigorous PhD program training, he feels he has learned three basic core aspects of Life Science Business: Drug Discovery (via the PhD program), Manufacturing Processing (MBS Bioprocessing) and Sales/Marketing (Business of Bioscience).

Reflecting upon his overall experience at KGI, William also said, “At KGI, I was trained to always apply and translate scientific discoveries through laboratory benchmarks into real tangible applications. I was also directly supervised by my Principal Investigator (PI), Dr. Martchenko, who continuously exposed me to and challenged me with rigorous research and training in the Drug Discovery field.”

Leeor also believes she has learned important lessons she can take into her future career as a scientist. “When I graduate, I hope that I can help companies rescue some of their failed compounds (there are thousands) and develop ways to test those for new indications in a scientifically logical manner.”

Discussing the value of the PhD program Leeor said, “Overall the most valuable thing I learned from this research was how to develop tests to determine whether a chemical compound can be used in humans with testing in cellular and even non-cellular tests and how to determine the way in which the drug/chemical works to protect against the infectious disease.”

Read the Identification of agents effective against multiple toxins and viruses by host-oriented cell targeting article.