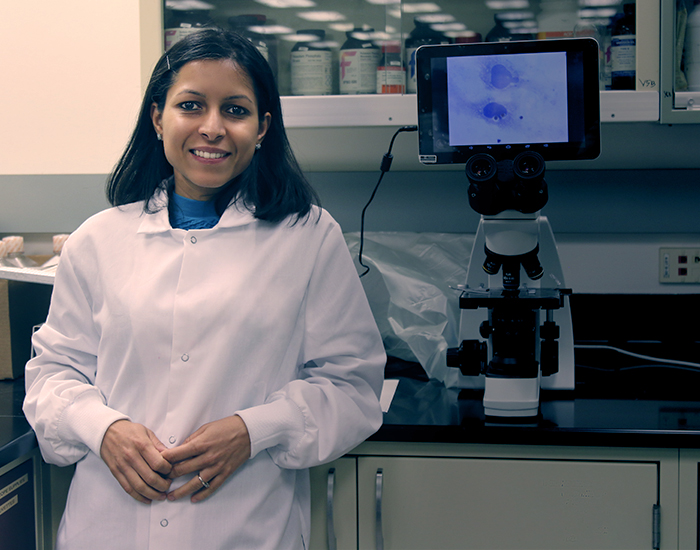 CLAREMONT, Calif. – Could Enbrel, a drug approved for rheumatoid arthritis, prove to be the answer to treating Alzheimer’s disease? That’s what Keck Graduate Institute (KGI) Associate Professor of Biopharmaceutical Sciences Rachita Sumbria has been seeking to determine, and the results from an initial study supported by a grant from the Alzheimer’s Association were promising.

That research was based on work Sumbria started as a postdoctoral fellow at the University of California, Los Angeles, with her mentor, William Pardridge. He founded the company, Armagen, Inc., that modified Enbrel to create a brain-penetrating form of the drug. Sumbria’s lab used this brain-penetrating version of Enbrel in a single mouse model to test its potential as a therapy for Alzheimer’s disease.

Now Sumbria will be able to expand her study as the principal investigator on a $1.9 million Research Project Grant (R01) recently awarded by the National Institutes of Health (NIH). She will collaborate with the University of California, Irvine, which will supply the necessary animal facilities.

“Inflammation is a key player in Alzheimer’s, but the anti-inflammatories that have been tested previously, such as Ibuprofen, failed in clinical trials because they didn’t make it into the brain or had side effects,” says Sumbria. “Nobody has been able to use Enbrel as a therapy for Alzheimer’s because the molecule is large. A modified version can get into the brain rather than just acting in the blood and target inflammation in the brain.”

Over the next five years, Sumbria will test the brain-penetrating version of Enbrel with a variety of mouse models to determine whether the previous positive data can be replicated. Sumbria will also use different doses of the brain-penetrating Enbrel to assess which is most effective. She will document both therapeutic changes and adverse effects of the drug, and seek to pinpoint the optimal time in the progression of Alzheimer’s to target the disease.

The mice Sumbria plans to study will range from young to old, enabling her to look at the harm and benefits of treatment at all ages and identify when it should start and stop. Knowing that Alzheimer’s requires long-term treatment, she will test the impact of long-term use of the brain-penetrating Enbrel in different mouse models.

“If everything works out as proposed, we will have a lot of data,” says Sumbria. “And if the data looks the way we think it will, we will move on to studying nonhuman primates.”

As she begins this new phase of research, Sumbria expresses appreciation for the opportunities the NIH grant is making possible. The funding will not only provide the necessary resources to contribute to the field of Alzheimer’s treatment, but also enable her to involve more KGI researchers in her work, train more graduate students, and present her research at international conferences.

“I’m thankful to the Alzheimer’s Association for providing the initial funding and to KGI for my startup funds. It’s impossible to get a big NIH grant like this if you don’t have preliminary data,” she says.