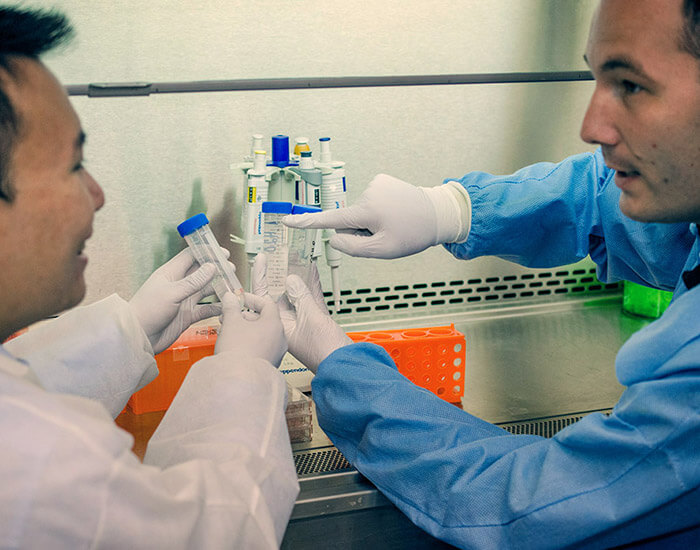 Today, there is no treatment or vaccine for the Zika virus, which has infected thousands of people in U.S. states and territories alone. However, a team of researchers led by Keck Graduate Institute (KGI) Assistant Professor Mikhail Martchenko Shilman recently identified a promising therapy, determining that the drug Bithionol could be repurposed to effectively combat Zika virus strains much like those causing the current outbreak.

“This drug is known to cross the brain-blood barrier in humans and the placental barrier. It’s also safe to use with children, so it has potential as a Zika therapy,” says Shilman, noting that Bithionol was discovered in the 1930s and previously approved by the Federal Drug Administration (FDA) to treat parasitic worms.

The findings of the professor and the research team consisting of KGI PhD, master’s, and postbaccalaureate premedical certificate (PPC) program students as well as collaborators at Stanford University, the U.S. Department of Agriculture, and the U.S. Army Medical Research Institute of Infectious Diseases were published in the scientific journal Nature Scientific Reports in September. In “Bithionol Blocks Pathogenicity of Bacterial Toxins, Ricin, and Zika Virus,” the authors describe how taking an atypical approach to the research led to their discovery.

As they had done once before to identify a drug effective in fighting the Ebola virus, the researchers targeted the host protein being exploited by the pathogen rather than the pathogen itself. Shilman says, “The advantage is that the therapy can block multiple pathogens so they don’t damage the cells. At the same time, you don’t develop the problem of drug resistance that occurs when you use a therapy that kills a pathogen directly.”

This time, the research team tested a library of drugs with at least a 20-year history of efficacy and safety in humans and animals, screening them for their ability to inhibit human caspases, the specific proteins that pathogens activate to cause cell death. The researchers demonstrated that Bithionol blocked the activity of six biological toxins, which include anthrax, cholera, botulinum, and ricin in addition to Zika.

“The concept for the approach was created at KGI. We also did the screening of the drugs and identified Bithionol,” Shilman says.

Though Shilman believes it is currently possible to produce Bithionol in sufficient quantities to treat Zika patients, testing beyond their cellular studies is needed before the drug can be considered for use. With other researchers still seeking to develop a Zika vaccine, he is uncertain whether the therapy or vaccine will be available sooner.

Nonetheless, the research has already provided a tangible benefit to two student members of the KGI research team. Shilman says of these students in the PPC program, “Both got into medical school because they had very interesting stories to tell about Zika and drug discovery during their admission interviews.”