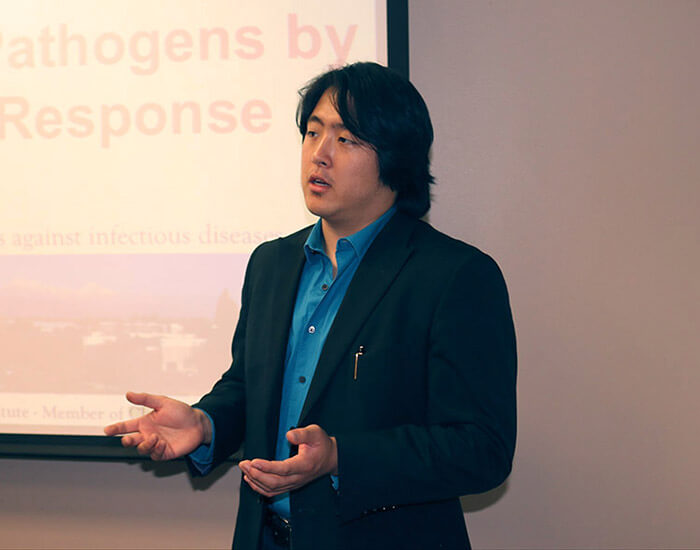 Kevin Kim is in a familiar place: For the second year in a row, his team is a semifinalist in the world’s largest life sciences and healthcare business plan competition.

Sponsored by Oxbridge Biotech Roundtable and the GlaxoSmithKline venture capital arm SR One, the OneStart competition supports young entrepreneurs with innovative ideas and businesses. With a top prize of $150,000 plus lab space and mentoring, the 2015 competition attracted more than 300 entrants from the Americas alone-nearly three times as many as before.

“I was excited that just 35 teams were chosen as semifinalists. That gave me a big sense of accomplishment,” says Kim, who completed his Master of Bioscience degree in 2014 and is now a KGI PhD student.

As he did last year, Kim is working with his faculty advisor, Assistant Professor Mikhail Martchenko Shilman. But Kim has moved on from anthrax therapies to a different project: With Dynamax Therapeutics, he’s seeking to address the “superbugs” that can result in hospital-acquired infections and patient deaths. His research into infectious diseases focuses on host-pathogen interactions and has led to discovery of a protein that, when inhibited, lessens the ability of pathogens to cause harm and may even prevent them from infiltrating a body’s systems.

“We’re primarily interested in the implications for clinical care, but it’s not far-fetched to think the research has bioterrorism implications as well,” Kim says. “I think we’re semifinalists because we’re approaching an old problem with a new point of view. We took a novel approach to reducing dependence on classical antibiotics and antimicrobials.”

As a semifinalist, Kim was invited to the OneStart Biotech Bootcamp in San Francisco in February. He describes the two-day training session covering topics such as writing business plans, building high-performing teams, and the financial and legal aspects of entrepreneurship as a “mini MBA.” Most valuable was the chance to interact with seasoned entrepreneurs, potential investors, and peers equally committed to launching their own ventures.

“I had an opportunity to develop contacts and get feedback and critiques from people who’ve done it before. This reinforced the education I’m getting at KGI,” Kim says. “The real prize is the experience itself. It’s inspirational to be with fellow entrepreneurs.”

During the bootcamp event, Kim worked with mentors from the Silicon Valley Bank, Takeda Pharmaceutical Company, and Johnson & Johnson. Like other semifinalists, Kim was also assigned an industry mentor to advise him as he polishes his business plan and slide deck for the competition’s next round of review that will determine the 10 finalists.

Kim speaks highly of his weekly phone meetings with Jeff Calcagno, a licensed physician who helped establish Johnson & Johnson’s California Innovation Center, noting that his mentor’s input led him to focus on a narrower group of pathogens.

“I was lucky to be paired in this way,” Kim says. “My interactions with him have also allowed me to frame my business in a way that’s more marketable.”

Kim has plenty to do while the OneStart judges winnow the field of competitors. His next tasks are target validation and high-throughput screening to find a chemical inhibitor.

“Getting to the finalist stage will be definitely be helpful, but if we don’t reach it, that won’t be detrimental. Nothing changes-the science must go on,” Kim says. “No matter what the outcome, I’ll continue with the research and continue to work hard.”