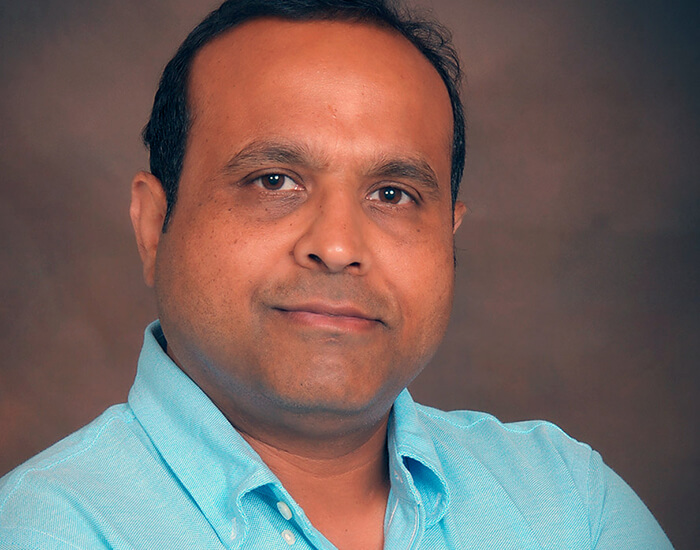 This story first appeared in KGI, 2016-2017 Annual Report, which can be accessed at kgi.edu/annualreport.

For Harish Dharuri, MBS ‘02, the experience at KGI involved several “firsts.” His arrival in Claremont marked his first time in a country outside India. He was a member of KGI’s Class of 2002, the first to complete the MBS program. After graduation, he helped launch Ionian Technologies, KGI’s first biotechnology company spin-off.

But first and foremost, Dharuri came to KGI to explore the intersection of science and business. He already held a master’s degree in biotechnology from Jawaharlal Nehru Technology University and at the time was an experienced chemical engineer working in industry. Based on what he had observed as a professional, he says: “I felt there was a need for people in business who had knowledge of science and for people in science who had knowledge of business. KGI had the only program that provided this.”

Later, however, Dharuri found his career embracing the science side of biotechnology more than the business side. He participated in a collaborative research project involving the University of Connecticut Health Center and the European Bioinformatics Institute and then spent three years as a scientific database curator at the California Institute of Technology. As time passed, Dharuri says, “I began to enjoy the science more and more. Basically, I like solving problems in biology. That’s also one of the reasons I came to KGI—I loved biology.”

Today, he is a bioinformatics scientist at Illumina, a global company offering products to enhance the collection, analysis, and application of biological information and helping to advance the understanding of genetics and health. Dharuri’s role since joining Illumina in 2014 has involved aggregating and organizing genomic and clinical data from public sources for users of a product called a cohort analyzer, a software tool for the analysis and interpretation of this type of information.

“My work at Illumina is more on the science side of the business. Most people who do this are PhDs in life sciences because you need to be well versed in biology and diseases,” says Dharuri, who earned a PhD in bioinformatics, genetics, and metabolic syndrome at Leiden University in the Netherlands more than a decade after completing his MBS. “It’s very exciting to be a part of the field of precision medicine. The tools we are building will help in heading in that direction.”

Dharuri got his introduction to bioinformatics at KGI, where he first took a course on the subject. But the broader benefit of the MBS program was the new perspective it gave him as a professional. He explains: “Often, scientists get caught up in small details. KGI taught me to take a bird’s-eye view. That perspective gives me an edge. I can simultaneously understand the science as well as the business side of my work. The program also made me a more confident person. In particular, my management classes, and the emphasis on entrepreneurship, were very helpful to me.”

They were also what led him to join former KGI professor David Galas and others in starting Ionian Technologies and a second biotechnology company, Zuyder. Though their ventures proved ill-timed for economic reasons, the experience didn’t dampen Dharuri’s enthusiasm for entrepreneurship.

“I’d like to get back on the business side of the industry eventually, and I want to be an entrepreneur. That’s been my dream,” he says. “At some point, the light bulb will go on. There are so many exciting things that need to be done.”