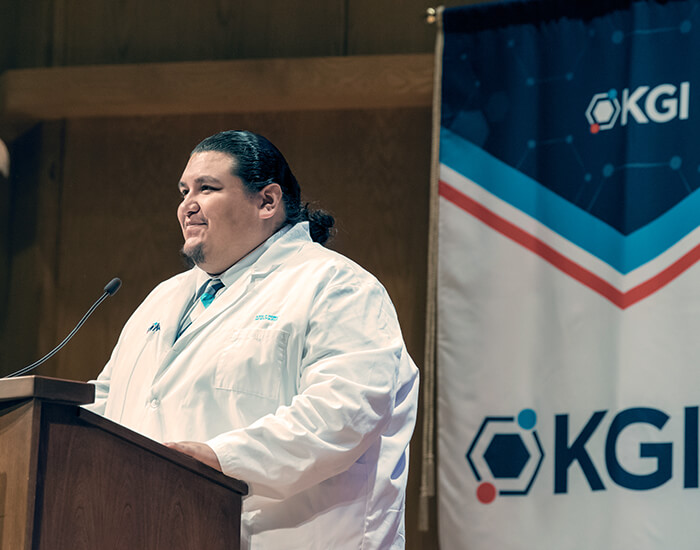 When Keck Graduate Institute (KGI) student Christopher Garcia, PharmD ’25, was two years old, his father had a heart attack. From that moment forward, Garcia has witnessed his father taking various medications for his heart.

“When I was a kid, I took one of his empty pill containers, put Smarties in it, and essentially started taking ‘medicine’ with him,” Garcia said. “As I grew older, I started learning more about why he was taking that medication. I became fascinated with how something as little as a pill could have such a big impact on the body.”

A couple of years ago, Garcia’s sister was diagnosed with thyroid cancer. Garcia—who, at the time, was pursuing his bachelor’s in biochemistry at Cal State San Bernardino—helped his family research the potential treatment options.

As the only one in his family with a science background—combined with the language barrier that his immigrant parents and relatives faced—Garcia wanted to help his family navigate the medical system and reassure them that his sister was receiving the best possible treatment for her condition.

“It took quite a bit of time, and I ended up failing one of my classes—which I retook later and got an A in,” Garcia said.

In the end, Garcia successfully researched the treatment options and explained them to his family, translating them into Spanish and breaking them down into basic terminology.

“I explained them to my cousins, aunts, uncles, and grandparents as well, so they could reinforce it and be reassured,” Garcia said.

This gave his family peace of mind, and his sister is thankfully doing well today due to her treatment.

When Garcia began applying to pharmacy schools, KGI’s Doctor of Pharmacy (PharmD) program immediately stood out with its warm, welcoming atmosphere. Another deciding factor for him was the certificate program, where students could gain additional experience in a specialized field.

So far, one of his favorite classes has been Introduction to the Industry. Unlike many students, he enjoys giving presentations—which was a significant class component.

“It’s important to get the practice now and become more confident in our speaking skills because once we’re talking to patients, we want to appear confident,” Garcia said. “It also translated well, as I gave a speech to the incoming class at the White Coat Ceremony this year.”

In Garcia’s speech, he addressed imposter syndrome, which is common among new PharmD students—especially when they learn about the accomplishments of faculty and older students.

“I reminded them of everything they had to do to get where they are today,” Garcia said. “They had to put in all the hours of studying and preparation.”

“They didn’t just get into KGI on a whim. It’s important to remember that.”

Garcia sees industry as a potential area he would like to go into when it comes to his career.

“I initially wanted to involve my Hispanic background in some way, such as targeting a specific area in pharmacy where my communication and translation skills could come in handy,” Garcia said. “So I thought about doing retail pharmacy, but I would only be able to help the people in my immediate area.”

He then considered going into hospital pharmacy.

“After a few years, though, it seems like it would become kind of stagnant,” Garcia said. “If I’m not interested in my work, I cannot put my best foot forward and get the best treatment for patients. But industry has ever-changing opportunities, where you’re always working towards a bigger goal. And I can also reach a wider population.”

One exciting thing Garcia has learned in his classes is that not only does the material they are learning have real-world application, but they become more apparent in their immediate reality when they learn specific topics.

“After we completed the endocrinology course, which covers the thyroid glands, one of my relatives had some tests on their thyroid because they were having issues,” Garcia said. “I could give them feedback in real-time and even predict the diagnosis and medication they would be given because I had learned it in my course.”

Similarly, he learned about atrial and ventricular fibrillation, which came in handy when he gave his family feedback on issues and medications they could use.

One professor who has stood out is Dr. Jeany Jun, chair of clinical and administrative sciences and associate professor.

“She knows a wide array of languages,” Garcia said. “One day, she surprised us in class by speaking Russian. She’s traveled the world and helped people everywhere. Then she comes here to teach us and share everything she’s picked up along the way.”

“I had the privilege of meeting Chris when he was in my endocrine course as a P1 student,” Jun said. “Subsequently, I got to know him better when he became a peer advisor for the P1 students that I advise. He was very thoughtful in his care and guidance for the P1 students. For example, he brought a Bundt cake for the students at Orientation and brought flowers for them at the White Coat Ceremony. These actions take forethought and a kind heart. If this is the care he brings to his patients that he will touch as a pharmacist, he will reach their hearts.”