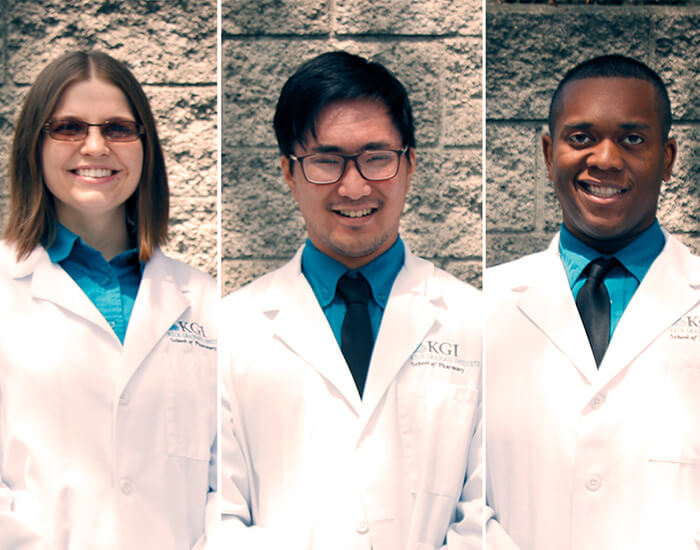 The American College of Clinical Pharmacy (ACCP) awarded the KGI trio with the top spot in the 2017 Clinical Research Challenge (CRC), as announced in early June.

The challenge featured teams of three students competing against teams from other schools of pharmacy in an online format. Teams that advanced to the final round were tasked with developing a research proposal designed to demonstrate the value of clinical pharmacy service(s) in a transitions of care environment.

“I am beyond thrilled that our student team won first place in the challenge,” said KGI Assistant Professor of Clinical Sciences Christine Cadiz, who served as faculty liaison for the competition. “This was no small feat, and with mentoring from four other KGI faculty advisors—Jean Anne Mire, Rachita Sumbria, David Ha, and Julie Truong—Adrienne, Keith, and Russle did an incredible job.”

The CRC was a rigorous event that consisted of three competitive rounds that began on Feb. 3, 2017. Teams from 82 schools of pharmacy participated in the challenge.

“To be able to win something that’s so prestigious is incredible,” said Desens. “It makes me more motivated to pursue clinical research and writing protocols in the future.”

During Round 1, the teams were required to critically appraise an assigned clinical paper and take an exam based on their appraisal. Teams achieving the top 40 scores after the initial online Journal Club Round were eligible for Round 2, in which they submitted a Letter of Intent for a research protocol of their choosing. Teams achieving the top 20 scores after Round 2 were invited to compete in Round 3 by developing their proposal into a Research Protocol.

The proposals were reviewed by the CRC Review Panel with the top third of submissions referred on for evaluation and selection of awards by the CRC Oversight Panel.

“I learned the tremendous value that research can play in helping to design new studies and interventions that improve the quality of patient care,” Benson said.

As the first-place winners, KGI will receive a team trophy and each of the three students will receive a $500 cash prize and an individual championship plaque. Additionally, the KGI team is invited to present their submitted research proposal design as a poster at the 2017 ACCP Annual Meeting this October in Phoenix, AZ.