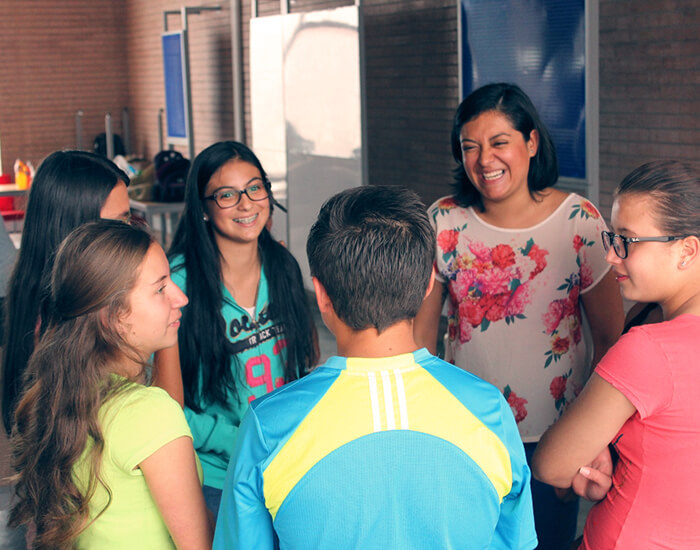 KGI PhD student Paola Hernandez has been bringing science education to students in Mexico and Colombia as an instructor for Clubes de Ciencia (Science Clubs), a non-profit organization that brings a series of intensive and project-oriented science workshops aimed at getting high school and undergraduate students interested in pursuing a career in science.

In the summer of 2105, Clubes de Ciencia held workshops in Merida, Xalapa, Ensenada, Guanajuato, Monterrey, and Oaxaca, Mexico. In fall 2015, the organization expanded its reach to offer science workshops in Colombia. Ten workshops were held from October 4 to 10 in Bogota and Parques Educativos de Antioquia. In Medellin, eight workshops were offered. For this round, Hernandez co-taught the workshop, Entrepreneurship + Life Sciences + You!

For these workshops, Clubes de Ciencia partnered with the government organization Parque Explora, which provides access to various free educational courses. Through this organization, people sign up and are given the freedom to choose whichever course they are interested in. Clubes de Ciencia is one of the options available and has been very popular.

Bringing science education to these areas in Colombia is particularly important, as this was the drug capital of the world in the 1980s. Hernandez explained that one of things she enjoyed most while working with younger students in Colombia was seeing how excited they were to participate in a workshop, which can be difficult to access at times. In some cases, the organization has received up to 1,000 applications for the 15 to 18 spots available in each class. Realizing not everyone has access to science-based education, the organization opts to forego major cities. Instead, they choose to go to remote locations where these resources aren’t common; Bogota and Medellin are examples.

Being an instructor for Clubes de Ciencia has had a huge impact on Hernandez’s life. Her involvement with students has allowed her to serve as a mentor, helping them with applications to scholarships and internships. She also helps students learn to network and to open their eyes to professional opportunities they may not be aware of.

Reflecting on the skills she strives to teach her students, Hernandez said: “People in science don’t know how to do a lot of these things, but KGI taught me, and now I am teaching my students how to write, network, and think beyond the traditional world of science. KGI gave me the tools to talk to other scientists and develop the skills to run these workshops.”

Hernandez also noted that KGI has given her the tools to understand and put science, business, and debate in context. She also gave credit to the PhD program, which has opened the doors to connect with other people throughout the globe.

“Whatever I do, I want to make a difference. You can make an impact right now with what you already know. Volunteering can be the key. Take opportunities when they come. You never know what will come your way and what will open your life to things you never considered. Also, be culturally sensitive because that is the route to success.”