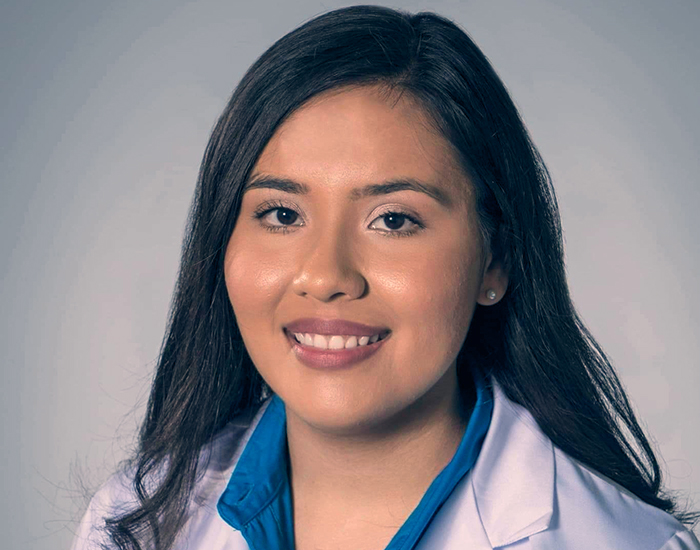 “In our last in-person clinic, before COVID-19 lockdowns, the majority of our patients were Spanish speakers,” Alejandro Quiñones, Postbaccalaureate Premedical Certificate (PPC) ’20 and Co-Vice President for PFC said. “We not only saw the importance of medical Spanish to provide quality health services but also the impact of just having conversational Spanish with patients—it brings tranquility and gets them smiling. These medical Spanish workshops arose from the initiative of our volunteers wanting to learn to communicate with Spanish-speaking patients, whether it is to explain a test result or hold a small conversation.”

Marquez Arellano, who grew up in Mexico but has a lot of family in the United States, has witnessed firsthand just how valuable it is to communicate with medical workers in Spanish. Being fluent in Spanish and English, she has often helped her family members by translating during doctor visits.

“It’s a big responsibility to have,” Marquez Arellano said. “That’s why I think it’s so important for healthcare professionals to be able to communicate with the patients and their families.”

Marquez Arellano and Quiñones are coordinating the six workshops along with four other members of the Medical Spanish Committee: Marvin Soriano, PharmD ’22, Lorenzo Santamaria, MS ’21, Paris Amezquita, PharmD ’23, and Melissa Vargas, MS ’22. Though the workshops will be held over Zoom, their goal is to make them as interactive as possible.

Each workshop will run about an hour, starting with a mini-lecture on the main topic and then engaging in roleplaying. The dialogue involves greeting the patient, providing test results, and educating the patient.

After sending out an interest form, the organizers determined that about half of the attendees would be fluent while the other half would be beginners. Once the attendees become familiar with the dialogue, they will be split into Zoom breakout rooms according to their ability level. For beginners, these sessions will focus on the dialogue itself, whereas the more advanced attendees will be engaged in scenarios.

“We’re thinking of doing the workshops bi-monthly,” Marquez Arellano said. “We’re still finalizing the dates because we want to make sure we choose a time that works for the majority.”

As far as her future plans go, Marquez Arellano will be applying to pharmacy residency programs and hopes to potentially pursue Ambulatory Care.

“Of course, I would love to serve everybody, but I hope to connect with patients who speak Spanish and help them, especially with diabetes, which is so predominant with Hispanics.”

Marquez Arellano appreciates how KGI provides so many opportunities to volunteer with the community. She encourages everyone to join the medical Spanish workshops, whether they do not speak a word of Spanish or are fluent.

“We hope to provide learning tools that allow our volunteers to continue learning medical Spanish after our workshops and carry those skills with them in their respective health careers,” Quiñones said.

To learn more about the workshops and how you can get involved, you can contact Marquez Arellano at rmarquezare18@students.kgi.edu.