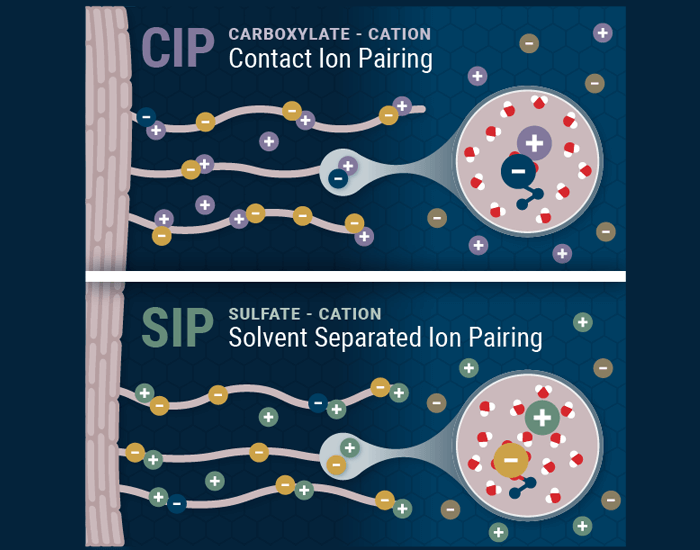 The work applies advanced molecular simulation methods to model a cell-surface coat known as the glyocalyx, which is prominent at our bodies’ mucosal surfaces. The model is a simplified representation of the glycocalyx—known as a “brush”—consisting of an array of long, linear sugar molecules (called glycosaminoglycans or GAGs) tethered at one end. They are highly negatively charged and are free to float in a salt solution.

“In biology, there are many cell and tissue interfaces that look like these highly-charged brushes,” said Sterling. “Studies have shown a voltage difference between a brush and the salt-layer that helps it remain neutrally charged. Our work quantitatively shows how the brush voltage depends on the specific salt and how both the GAGs and salt ions compete for water.”

Sterling established this partnership with Luo following a presentation of Luo’s work on molecular dynamics simulations at the annual KGI Research Symposium in January 2019. Their simulations are known as “all-atom” because every atom’s motion, including those in water, is tracked over time.

“When Jim asked if we could simulate GAGs, I wasn’t sure because the focus of our work has been on membrane-bound proteins,” Luo said of the initial budding partnership. “So, it took some research to find that there were indeed some good new models for carbohydrates that we could apply to contribute to understanding how these sugars might affect human health.”

One of the most challenging issues for the research team was finding appropriate atomistic models for the negatively charged GAG sulfates that pair with the salt cations.

“These pairing interactions are critical if we are to simulate GAG brushes accurately,” said Luo. “Another challenge related to the nature and role of polarization of the molecules, so we also implemented recent advances known as Drude-polarizable force field models. We have characterized which of our results are model-independent and which are sensitive to the model we are using.”

Previous studies have shown that cell-surface sugars are negatively charged, so they attract not only cations but also many proteins involved in the innate immune system that have positively charged domains, including cytokines, growth factors, and defensins.

“In analogy to protein-purification technology, we have come to view the glycocalyx as a sort of cation-exchange stationary phase that captures or elutes innate-immune molecules under different salt conditions,” said Sterling.

The research by Sterling and Luo’s team already has implications for other researchers around the world. Professor Megan Lord from the University of New South Wales stated, “My group studies the GAG molecules discussed in this paper, and this contribution provides some fundamental biophysical insights that will affect our own research.”

Sterling hopes to expand their current work to characterize such interactions by building on the GAG-salt models presented in the paper.

“We hope that this work and new perspective can be applied to the development of therapeutics that target the glycocalyx as a multivalent innate immune surface.”