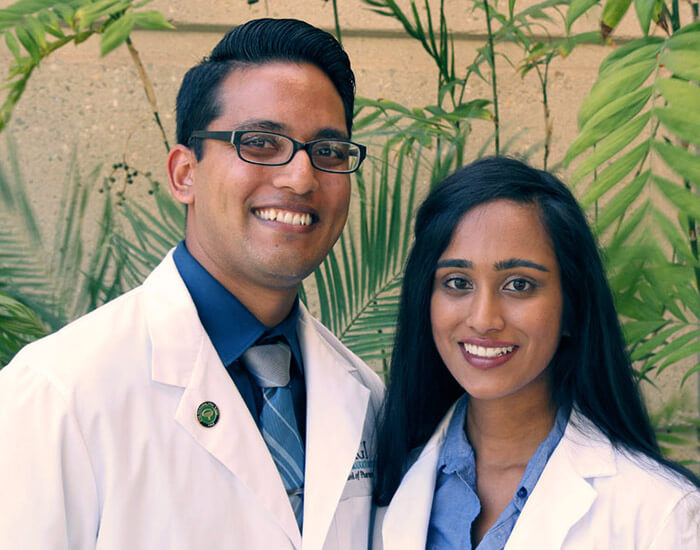 Rajan Vaidya, PharmD ’18, has an enthusiasm for pharmacy and Keck Graduate Institute (KGI) that’s clearly contagious. The evidence? This fall, Rajan’s younger sister, Mona, joined him as a student in KGI’s PharmD program.

“My brother has had a great influence on my choice to pursue a career in pharmacy. His passion for pharmacy makes me want to be just as involved,” says Mona Vaidya, PharmD ’20, who came to KGI after graduating from California State University Dominguez Hills, where she earned a B.S. in clinical science with a focus on medical technology.

Each sibling had gained early exposure to pharmacy by enrolling in a pharmacy technician course while in high school. But Rajan revealed a leaning toward the profession even as a child, when he recalls reading medication labels with curiosity. As a high school student, he held an internship and then a job as a pharmacy technician at Anaheim Regional Medical Center. Rajan continued working at the hospital while earning an associate’s degree at Fullerton College and a B.S. in chemistry at the University of California San Diego.

Feeling ready to grow beyond his role as a pharmacy technician and responsibilities preparing IV bags for patients, Rajan decided to apply to pharmacy school once he completed his undergraduate studies. KGI quickly emerged as his choice, and he became a member of the School of Pharmacy’s inaugural class.

“I came to KGI with the thought that I would return to my hospital as a pharmacist,” Rajan says. “But KGI has shown me I can do more than go back to the hospital.”

Since enrolling, Rajan has become not only a School of Pharmacy class president, but also a leader in the California Pharmacy Association. Currently serving on the association’s board of trustees, he represents all of California’s pharmacy students, including his classmates at KGI.

Now Rajan’s long-term goal is to influence healthcare policy by running for political office. But first he hopes to apply his health operations management concentration as a hospital administrator. Rajan plans to start on that path by pursuing postgraduate residencies once he completes his PharmD degree.

“Working toward building a better, safer healthcare environment is what I’m passionate about,” he says. “Not many pharmacists are thinking about this, but I want to be part of the discussion and leading the discussion.”

Meanwhile, Mona is seeking her own direction in pharmacy. As a first-year student, she looks forward to gaining exposure to many aspects of the profession and participating in organizations and activities at KGI. She is already enjoying the teamwork aspect of her KGI education.

“Having the ability to collaborate with other students will be instrumental in my learning and successfully prepare me to work with other healthcare professionals,” Mona says.

Though they attend the same school, Rajan and Mona don’t have any classes in common and are often too busy to talk frequently. But having an older brother who is further along in the pharmacy program is helpful when Mona has questions about a class. And the siblings speak with admiration about each other, with Mona expressing pride in her brother’s passion for pharmacy and leadership while Rajan praises her abilities, determination, and drive.

Rajan believes their relationship has grown stronger now that Mona has also become a KGI pharmacy student. He explains, “Now I see her as a colleague, not just as my little sister. When we talk about pharmacy, I’m helping her be a better pharmacist.”