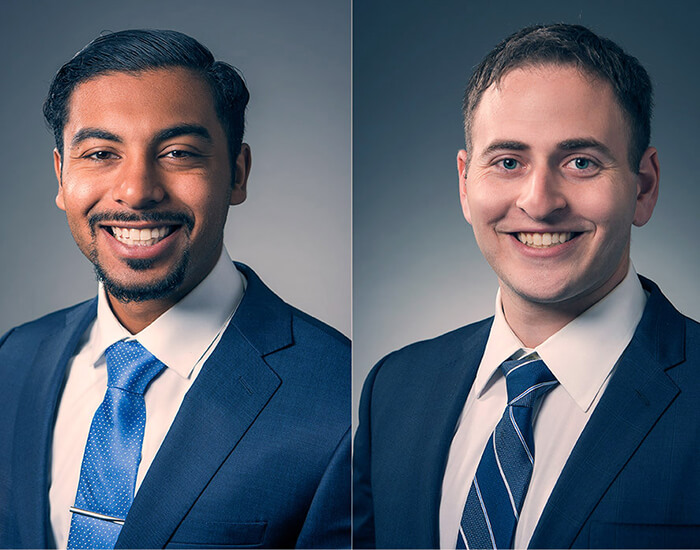 Ross Steinberg and Shan Ahmad, both second-year Master of Business and Science students at Keck Graduate Institute (KGI), have been selected to speak at the TEDxKGI event happening on Friday, Feb. 2, 2018. Both speakers were chosen from among a group of current KGI students who presented sample talks at a student speech competition on Oct. 18.

The TEDxKGI event, which is KGI’s first-ever foray into hosting a TEDx event, will feature intellectual speakers presenting thought-provoking ideas, inspiring individuals to learn new perspectives. The theme for TEDxKGI—“Shaping the Future”—coincides with KGI’s 20th Anniversary, and will include live TED talks and videos previously recorded at TED conferences to share with the community.

“The TEDxKGI committee were very inspired by Ross and Shan’s presentations during the student speech competition,” said Andrea Mozqueda, student services specialist at KGI. “They both have real-world experiences to share with the community, and we believe they will do an amazing job presenting at TEDxKGI.”

Ahmad’s topic, locational privilege, is one that he is very passionate about.

“When I moved from Florida to California, it really hit me that location has a huge impact on both personal and professional development,” Ahmad said. “The idea that people who grow up in a particular city or region have an inherent advantage over others isn’t something I have seen being discussed often. I simply want to get people to start thinking about how their environment and location have impacted their lives.”

Ahmad jumped at the opportunity to speak at TEDxKGI, and delivered an authentic and conversational speech during the student competition.

“The TED forum is one where innovation and controversial topics can be discussed, where boundaries can be pushed, and where intellectualism is celebrated,” Ahmad said. “Once we have an understanding of locational priviledge, we must be willing to take control and shape our own future by taking the necessary steps to overcome locational disadvantage and make a better life for ourselves.”

Steinberg agrees that presenting at TEDxKGI is a great opportunity to share his topic—nutrition—with the community, especially with national and global health problems such as obesity and diabetes continuing to increase in scale.

“I started my career in strength and conditioning, working with professional and Olympic-aspiring athletes,” Steinberg said. “I noticed that they all had foods that were recommended to them, but that they responded in drastically different ways to changes in their diets. In investigating nutrition, I found a field that has more in common with religion than science at times.”

Steinberg also notes that nutrition is a field that has seen significant shifts in the message it is conveying to the public, and hopes to enlighten the KGI community on nutritional genomics and how that should define how we eat and view our bodies.

“As genetic data becomes more available to consumers, we need to look at nutritional needs as a sample size of one, rather than what is generally good for the population,” Steinberg said.

Both Ahmad and Steinberg will join approximately half a dozen other speakers selected to talk at TEDxKGI. The full list of speakers will be announced later this month.

Tickets for TEDxKGI will go on sale Thursday, Nov. 30. In accordance with the license terms issued through TED, the event is limited to the first 100 people who sign up. The cost will be $20 per person. For those unable to attend, a viewing party will be hosted a few weeks after the event.