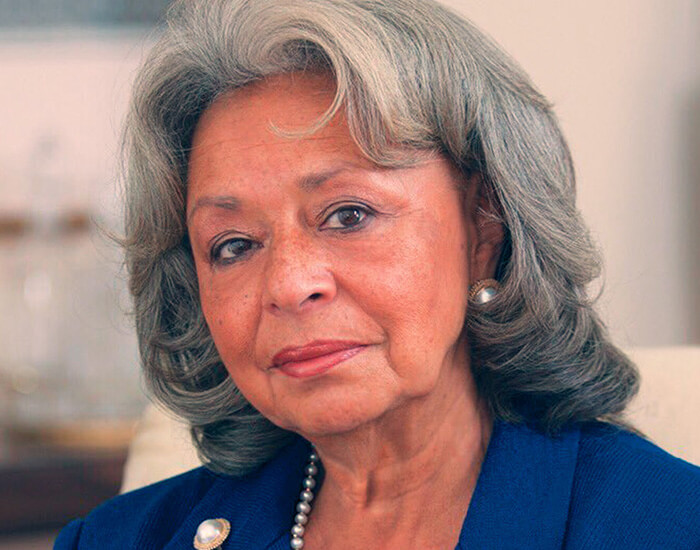 Graduate students of color from The Claremont Colleges networked with peers and heard from a pioneering role model over dinner on April 14, at the Claremont home of KGI President Sheldon Schuster and his wife, Susan Wessler.

The tradition started five years ago when graduate students at CGU wanted to develop a sense of community. In response to student feedback, the Claremont University Consortium (CUC) coordinated a networking lunch for graduate students of color at the Administrative Campus Center. CUC annually invites faculty, staff, and other friends of The Claremont Colleges to this event. Last year’s event was the first to be held at a president’s home, that of Robert Schult, then interim president of Claremont Graduate University (CGU).

CUC Vice President for Student Affairs Denise Hayes asked if this year’s event could be hosted at Schuster’s home. Hayes, along with Nick Daily, assistant dean of black student affairs, and other staff members coordinate the annual event.

As attendees began to arrive, many congregated near the entryway, while others dispersed outside to enjoy the backyard vista and desert flower landscape. Schuster mingled with guests, and small groups formed to share their histories and find similarities among one another.

Before enjoying dinner together inside, the approximately 40 guests were welcomed with a few words from Hayes, Schuster, and current interim CGU president Jacob Adams. In addition, Hayes and her team asked trivia questions about both graduate schools, rewarding winners with prizes branded with school insignia.

The guest of honor for the evening, Dr. Vivian Pinn, a renowned pioneer in the medical sciences, addressed attendees with a presentation titled “Personal Perspectives on Negotiating Pathways for Success.”

Pinn provided a cartoon map of her successes. In 1967, she was the first African-American woman to graduate from the University of Virginia. Schuster interjected that there is now a Pinn Hall at University of Virginia. In 1991, Pinn became the first African-American woman to chair an academic pathology department in the U.S. In 1994, Pinn was the inaugural full-time director of the Office of Research on Women’s Health at the National Institutes of Health (NIH).

While deciding if she would make the move to NIH, Pinn was hesitant to get involved in politics because of her assertive personality. Also, the decision would mean leaving her pathology chair position behind for a risky spot in government.

Pinn’s successes were not simply personal, but were also wins for minorities and women. One area that Pinn impacted greatly is the demographics of clinical trials. Besides trials limited to “bikini medicine” (medicine that focuses only on areas of women’s bodies that would be covered by a bikini), no other clinical trials included women. Pinn fought for women’s inclusion and urged further, “If you’re going to be looking at women’s health, you need to include minorities and consider women’s careers.”

Although Pinn’s personal pathway to success is an inspiration in itself, it was her sense of humor and advice that ignited the room.

As she began her talk, she leaned on a male student for support. She announced that she had received his consent and, in fact, he had offered his support, as she did not have her cane handy. Relaxed laughter filled the room.

Pinn’s presentation centered on the importance of mentor relationships. “I didn’t have anyone I felt comfortable with, which is why I feel I have a responsibility to be there for students. To say ‘yes’ because of what has happened to me,” she said.

Pinn also talked about how rejection is inevitable, and that students should not live in fear of it. “If you want the best, you have to try for the best,” she said, and with that comes the risk of rejection. “You have to reach for the stars or you’ll never get to the stars.”

Pinn recognized that, as minorities, students will face prejudice, but cautioned listeners not to get caught up in bias. Instead of worrying about bias, “Spend your time thinking about how you’re going to overcome it,” she said. Commenting on the purpose of the gathering, she said, “‘People of color’ is a better term to use—minorities aren’t really minorities anymore, as we’re growing in population.”

After Pinn’s talk, guests had warmed up and were jovial, enjoying each other’s company and personal histories.