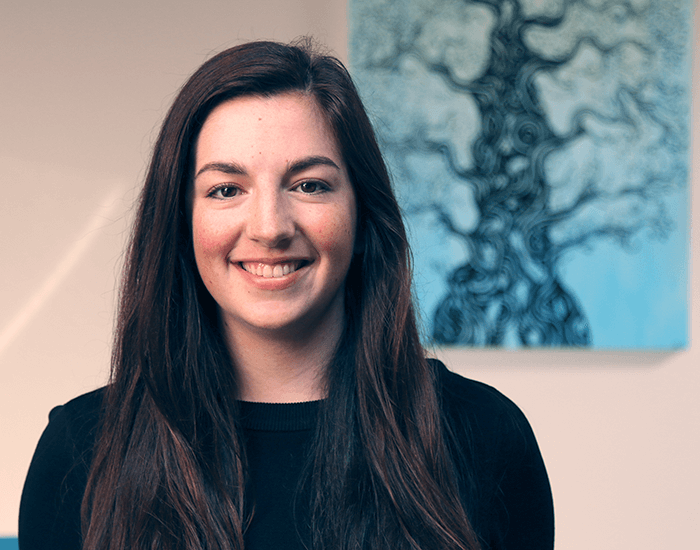 A Leader in Class and on the Court

For most students, undertaking the Keck Graduate Institute (KGI) Postbaccalaureate Premedical Certificate (PPC) program is enough of a challenge. But Corinne Bogle, PPC ’19, decided she would continue playing for the Claremont-Mudd-Scripps (CMS) women’s basketball team during the program.

“It’s very demanding and something I think I underestimated a bit,” admits Bogle. “It tested me in ways I hadn’t been tested before but made me a better student and a better person.”

Bogle, who earned a bachelor’s degree in biology from Claremont McKenna College in 2018, is the second graduate of The Claremont Colleges to combine the PPC and women’s basketball. She follows Kyra Ray, PPC ’15, a Scripps College biology graduate who is now a medical student at the Frank H. Netter School of Medicine at Quinnipiac University in Connecticut.

The two were teammates during Bogle’s first year in Claremont, which coincided with Ray’s time at KGI. It was through Ray that Bogle first learned of the PPC program and to whom she turned as she considered whether to take on the program and basketball at the same time.

“When I was a senior, my coach told me I had another year of eligibility. I had an opportunity to make myself more competitive for medical school and finish my basketball career,” says Bogle.

She also wanted to complete the research she had begun as an undergraduate, working with Professor John Milton of the Keck Science Department. Bogle had created her own project for her senior thesis related to analyzing and quantifying the human walking gait.

Bogle decided to do it all. As a shooting guard and captain for a second year, she led her team to the best record in the basketball program’s history before their defeat in the conference finals, cheered on by her PPC classmates as she played. She’s hopeful that the research she has contributed to will result in a published paper. And she is nearing the end of the PPC program, having performed successfully.

“Everything I learned on the basketball court about working with a group to accomplish a goal has definitely translated into the classroom, and vice versa.”

Joon Kim, the director of KGI’s PPC and Postbaccalaureate Pre-PA (PPA) programs, agrees and believes Bogle’s experiences will impress medical schools when she applies for admission.

“She’s shown a commitment to a rigorous academic program and a sport. She is mature, friendly, and definitely collaborative. She embodies that, and her strength in working on teams further validates her leadership abilities,” he says.

Once Bogle completes the PPC program, she will spend a year at Mission Hospital in Mission Viejo, working as a scribe and gaining as much shadowing and clinical experience as possible while she also studies for the MCAT exam and completes medical school applications. Though not ready to choose a medical specialty, Bogle acknowledges an interest in orthopedics because of her research and experience with a torn ACL during her first year in Claremont.

“The first step is to get into medical school,” she says.