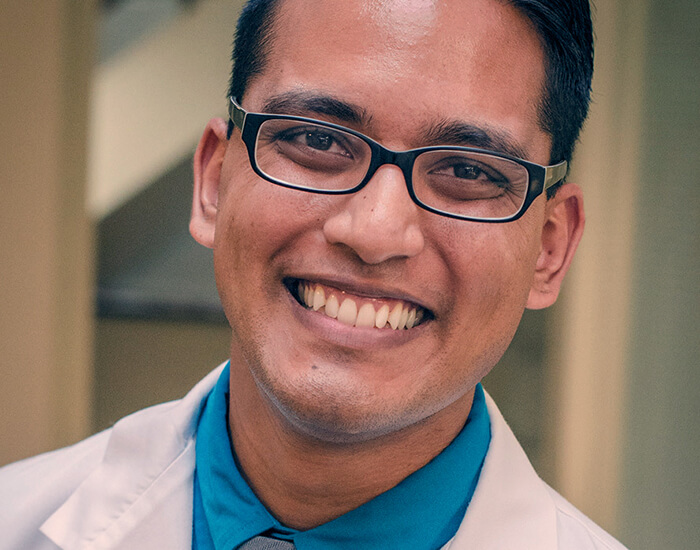 “It’s one thing to get a residency and another to get that residency,” says David Ha, an assistant professor of clinical sciences in the School of Pharmacy and Health Sciences at Keck Graduate Institute (KGI), about Vaidya’s executive residency. “There’s only one awarded across the country, and I know the competition is strong. Any of the candidates from any school would be the best of the best, and most schools will never be able to say they have a recipient, even if they’ve been around for 100 years.”

Yet neither Ha nor Associate Director for Student Affairs Kristen Felthousen, both of whom first met Vaidya through his work as a student government leader for KGI’s inaugural School of Pharmacy class, is surprised that he would stand out.

“What sets Rajan apart is a level of maturity that a lot of people don’t find in their whole lives but for some reason comes very naturally to him. He’d be a star in whatever he chose to do,” says Ha.

Felthousen adds, “He’s adept in connecting people at any level and is very genuine. He’s always diplomatic and able to come with solutions. I think that makes a good leader. ”

“What sets Rajan apart is a level of maturity that a lot of people don’t find in their whole lives.” – David Ha

During his time at KGI, Vaidya became the first two-term student trustee on the CPhA Board of Trustees, representing all pharmacy students in the state. He has served on CPhA’s legislative and policy committees, roles that took him to state conferences and legislative days in Sacramento, CA and to Washington, DC, where he advocated for pharmacists at the offices of U.S. Senator Kamala Harris and U.S. Representative John Garamendi of California. Vaidya has also been a leader in the Indian Pharmacists Association, contributing to its political action committee and as mentor–mentee program co-coordinator.

When he was ready for the first of two elective rotations that are part of KGI’s fourth-year pharmacy curriculum, Vaidya accepted an offer from Assistant Surgeon General Pamela Schweitzer to come to the Center for Medicare and Medicaid Services in Baltimore. Now he’s in the second rotation, working in Sacramento with California State Senator Jeff Stone, a pharmacist by training.

“I’ve chosen to take my experience beyond traditional pharmacy and do more in healthcare policy,” says Vaidya. “I saw that healthcare decisions are being made without any input from pharmacists. I could work with one patient at a time, providing direct health services, but I realize I can make an impact by being part of the discussion to influence health policy.”