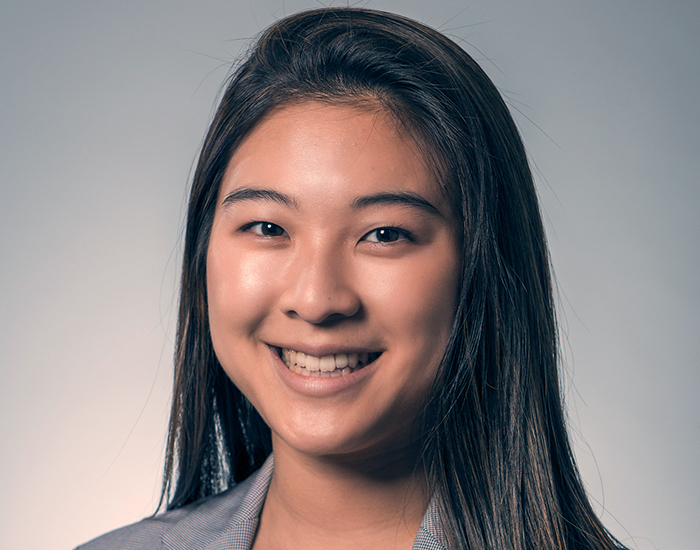 Noa Park, MBS ’20, checked off an item from her bucket list when she became one of two winners in the Keck Graduate Institute (KGI) Student Speech Competition to earn a spot at speaking at TEDxKGI, scheduled for February 7, 2020*.

Park first heard about TED Talks when she was in middle school and thought it was a great platform to allow people to communicate their ideas. At the time, she was more reserved, but was certain that she had ideas to share.

“It was in my head for a long time that I wanted to do a TED Talk,” she said.

Park’s presentation discussed the importance of multilingualism in the health professions.

“I started traveling to developing countries at a young age, and learned that it’s not just people in the United States; there are others that don’t have the same luxuries, even immigrants who come to the U.S. struggle to get their health needs met,” said Park. “I started thinking about how we can do better as healthcare providers.”

The importance of multilingualism was ingrained into Park at a young age. As a Korean-American, Park grew up speaking Korean and English. She received her childhood education in Los Angeles where students were required to take Spanish language from 6th-12th grade. Park always admired that Spanish was included in the curriculum and didn’t want to lose the language she had acquired. In addition to her Korean, English, and Spanish knowledge, Park also learned French.

Park was interested in The Claremont Colleges for her undergraduate degree, but ended up attending Carnegie Mellon University, majoring in Hispanic Studies.

“It was so fun moving across the country,” said Park. “I had a really positive experience. I miss it a lot.”

When looking at graduate schools, she discovered that The Claremont Colleges had two of them. Since she had always focused on science throughout her studies, she researched KGI and loved the emphasis on entrepreneurship and business.

Now a second-year student in the Master of Business and Science program at KGI, Park is an active member of the community. She serves as Treasurer for Student Government and is the Vice President of Marketing and Advertisements for Global Medical Brigade.

She is currently working on a Team Master’s Project for Hologic, a diagnostics company for women’s health. The project involves evaluation of the point-of-care market. Last year, Park worked for Efyian, a company created and run by KGI’s Arnold and Mabel Beckman Professor, Angelika Niemz, along with KGI students.

“Noa is a strong woman who speaks up about what is important to her,” says Niemz. “I have a lot of respect for Noa, who definitely has had an impact on our campus.”

Park knew that she wanted to be a doctor since before she was in Kindergarten. Along the way, she picked up other interests like engineering, math, and auto repair.

“The one career path I can really see myself always being excited about is medicine.”

“Fixing a car and solving a human problem have some similarities,” says Park.

Like many KGI students, Park is not taking a traditional educational route. A typical aspiring doctor would enter into a postbaccalaureate program after receiving their bachelor’s degree, but Park is taking a different course. KGI has exposed her to a multitude of pathways to accomplish her dream of becoming a well-rounded, compassionate, and skilled doctor, and speaking at TEDxKGI is just one of those ways.

*TEDxKGI has been rescheduled for 2021