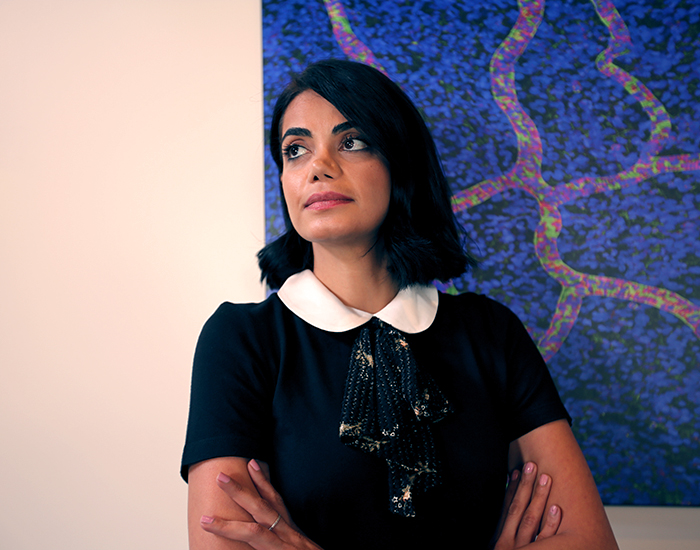 Keck Graduate Institute (KGI) Associate Professor Dr. Kiana Aran and Co-founder and Chief Scientific Officer of Cardea Bio was recently announced as the winner of the 2021 Nature Research Awards for Inspiring Women in Science in the Scientific Achievement category. The goal of the awards is to celebrate the achievements of women in STEM careers around the world.

As the winner, Aran will receive a prize of $40,000, an invitation to the awards ceremony in London, and coverage on nature.com. In her short career, Aran has earned many accolades for her contributions to science and medicine, including the Clinical OMICs 10 under 40 Award, the Athena Pinnacle Award, and the Faculty Early Career Development (CAREER) award from the National Science Foundation (NSF).

Aran’s primary focus as a biomedical entrepreneur and researcher is fusing biology with technology to design the next generation of biosensors for early disease diagnosis. She invented and developed the CRISPR-Chip, the first CRISPR-powered transistor which allows for fast detection of heritable disease variants.

“CRISPR was an enzyme developed by nature over millions of years to detect and destroy viral particles within bacteria,” Aran said. “This fascinating enzyme can unzip double-stranded DNA, find its target with the help of an RNA molecule, and then clip it. It’s really a wonderful search engine that biology and nature have created.”

Her biosensing platforms harness the power of CRISPR while utilizing modern electronics developed since the 1950s, such as transistors, making the transistors more biocompatible so they can work with biology in harmony. Cardea Bio’s latest development, the EV-Chip—a prototype portable, low-cost reader for detecting and quantifying exosome biomarkers of cancer and other aging-related diseases—was recently featured on the front cover of Advanced Biology.

Aran believes that awards such as the one she just received are important because they highlight the crucial work that she and others are doing to transform healthcare and because promoting the early-career accomplishments of women such as herself will encourage other women to take on leadership roles in STEM.

“Despite increasing numbers of women who choose to pursue research careers, we still see too few who take on senior roles of responsibility and leadership,” said Dr. Magdalena Skipper, Editor in Chief at Nature. “There are many reasons for it. Among them is that many do not feel sufficiently supported or that their efforts early on in their careers are sufficiently recognized.”

Although women make up over 60% of university students, less than five percent take on leadership roles upon graduation.

According to Aran, one of the issues is that when society highlights female leaders, often too much emphasis is placed on limitations.

“We usually get asked questions such as, ‘What is it like for you to work in a male-dominated field?'” Aran said.

Rather than inspiring other young women to follow in their footsteps, this type of publicity could discourage these women by causing them to focus on all the obstacles associated with leadership. Aran believes the focus should be shifted towards solutions—specifically the tools and resources that will help prepare women for these roles.

“Most of my PhD students have their own team of graduates and undergraduates,” Aran said. “They have to juggle multiple projects and responsibilities. This is how you train them to become leaders—by providing them with opportunities and allowing them to fail, because that’s part of the process.”

She states that leadership must also be a mutual agreement; it cannot be forced upon someone.

“For those who really want to become leaders, creating these opportunities is my whole mission,” Aran said.

Through her lab and her company, she is providing women with the opportunity to become leaders in the world of research by teaching them how to create and manage their own teams.

“I’m looking forward to becoming a better leader myself,” Aran said. “I’m still at the beginning of this journey, but as I’m learning, I transfer everything I learn to my mentees. The better role model I become, the more opportunities I can create for other women in science to take on leadership roles.”

Subscribe to KGI’s e-newsletter
Request program information
Back to all news Raised in the World of Professional Boxing, PPC Student Nicole Diaz Discovers the Fusion Between Sports and Medicine Previous news story Husband and Wife Use KGI's PhD Program as a Stepping Stone to Improve Healthcare in Their Home Country of Nigeria Next news story