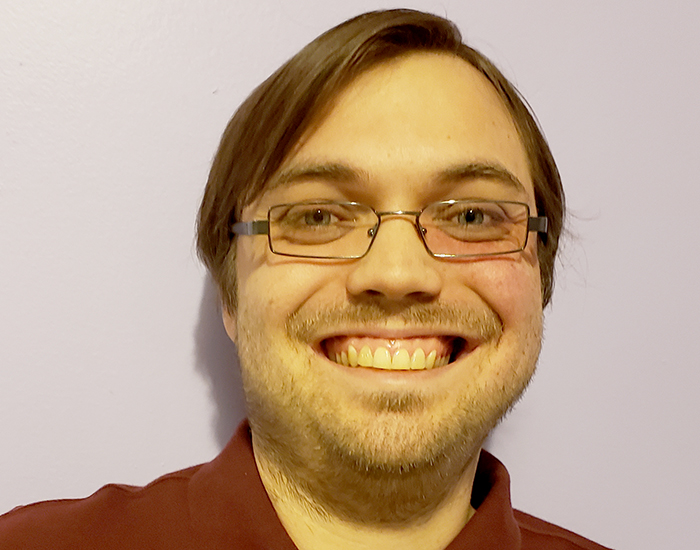 Keck Graduate Institute (KGI) alumnus Dr. George Tiller, PPM ’15, has taken an unconventional path, leaving his job in industry to teach high school biology for Los Angeles Unified School District (LAUSD). His industry experience has informed and enriched the lessons he delivers to his students while allowing him to partake in his greatest passion: teaching.

Tiller originally wanted to become a physician, but he found that path didn’t allow for the type of exploration he craved. This led him to earn a PhD in Microbiology and Molecular Genetics from the University of Texas Health Science Center at Houston.

However, he still wasn’t satisfied with his options, and he saw many career professors lose their jobs due to funding issues. As he approached graduation, he connected with a mentor, Dr. Alejandra Klauer, who had graduated from KGI and later worked for Regeneron.

“Working with her, it became clear that this was the right path for me—to leave basic research behind, at least from the bench side—and to instead use my research to help get essential therapies approved for the rest of the world,” Tiller said.

Tiller enrolled at KGI, where he completed the Postdoctoral Professional Masters (PPM) program. Although the PPM program has since been phased out, it was similar to KGI’s Master of Business and Science (MBS) program.

While the MBS program is two years, the PPM program featured much of the same curriculum compressed into one year. Because PPM was specifically designed for those who had already completed a PhD, students skipped most basic science courses and instead focused on business courses.

“It was incredibly challenging,” Tiller said. “It’s kind of like having to speak four different languages at the same time because yes, you know the science, but now you have to learn the language of accounting, business, and corporate finance. But it was gratifying.”

During his rotations, Tiller worked with several major biotech companies, including Eli Lilly, where he served as a consultant and helped them capture their data in real-time more efficiently.

“The best part about attending KGI was all the industry connections that kept flowing in,” Tiller said. “As long as you went to the meetings, it was very natural.”

He especially appreciated working with former KGI professor Dr. Mikhail Martchenko Shilman on a project related to the anthrax vaccine. He performed research to see if there was any market in the livestock industry.

After KGI, Tiller landed a job as a Regulatory Affairs Specialist, first at Endologix, Inc. and then for Advanced Bionics, a cochlear implant company that helps people restore their hearing. This involved an 80-mile commute, though, and restoring hearing was not considered an essential surgery when the COVID-19 pandemic began.

As a result, Tiller was laid off along with many other employees. Tiller turned his setback into an opportunity to pursue his dream of teaching, becoming a high school biology teacher for LAUSD.

Although he could complete many audiobooks during his drive to Advanced Bionics, he was grateful to be placed in Bell High School for this school year, much closer to his home in East Los Angeles. The shorter commute affords him more time to manage his responsibilities, including teaching, caring for a newborn, and attending night classes as part of LAUSD’s Intern Program.

Tiller has his work cut out for him. Bell is a massive school with around 2,400 students. His biggest class has 35 students, and his smallest has 26. He primarily teaches regular biology classes, with one Honors class.

“Last semester, I started during the primetime of the COVID-19 pandemic, so classes were all online,” Tiller said. “That was challenging, but what was cool was that I got to make my biology lessons the way I wanted as long as they met the standards. I got to draw upon my work experiences, my research, and my KGI experience and all the opportunities that it opened up for me.”

Tiller has worked for four companies in the past five years, including a cardiovascular company in Irvine that creates therapeutics for abdominal aortic aneurysms.

“I gave my students a project based on this,” Tiller said. “We had just covered genetics, so they knew how the basics worked. I gave them examples of a couple of genetic diseases that are cardiovascular-related, and I told them to make a medical device to treat those diseases, providing them with some prototypes.”

The project was very successful. Throughout the semester, Tiller introduced projects based on knowledge gained from working with companies such as Eli Lilly.

“When I introduced recombinant DNA, I explained how we could put human DNA in bacteria,” Tiller said. “That’s how we accomplished mass production of insulin, and big companies like Eli Lilly in Indianapolis still work with that.”

Tiller also explained how the COVID vaccine works and the technology behind it.

“I also stress that it doesn’t matter if they’re never going to be a scientist if they’d rather go into business or marketing or some other field,” Tiller said. “I worked with all those departments as a regulatory person. I told them, ‘These companies need every single one of you, whether you’re super familiar with biology or not.’ There are plenty of jobs in the medical device, pharmaceutical, and biotech fields; you’ll never hear about them generally.”

Tiller eventually wants to become a professor at a community college, as he enjoys teaching lectures and conducting labs.

“I would love to teach at a four-year institute, but those require lots of research, and though I enjoy research, I’m more interested in teaching,” Tiller said. “However, it’s pretty hard to break into the community college circuit. So right now, being a high school teacher is the best option for me.”