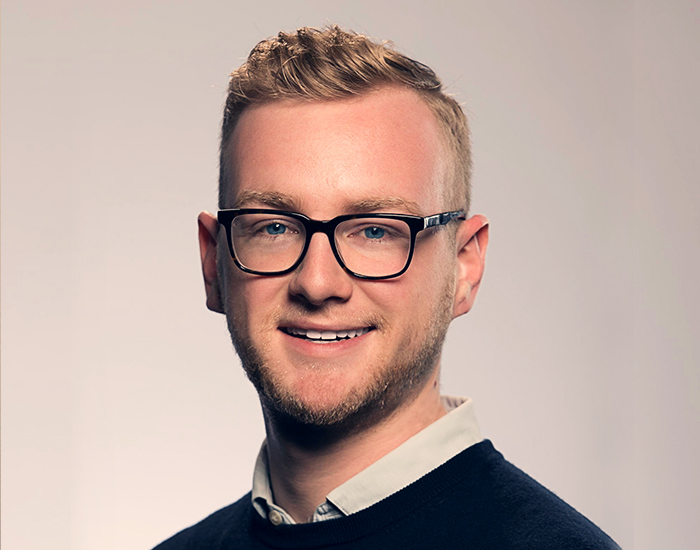 For Keck Graduate Institute (KGI) student Jason Tate, MSGC ’22, the road to acceptance into KGI’s Master of Science in Human Genetics and Genetic Counseling (MSGC) program has not fit the traditional student mold. He dropped out of school at the beginning of third grade with a plan to be homeschooled, but that didn’t last long.

Tate, a Kentucky native, comes from a lower socioeconomic background. When his mother had to go back to work, his parents tried to keep up with his homeschooling, but it became too difficult for them to juggle everything.

“This was a case of what’s known as educational neglect,” Tate said. “I did not have any formal education between the third grade and when I earned a general education diploma (GED). My parents are good people. They just lost control of things.”

For Tate, what spurred him to continue his education was not a single turning point or person but rather a series of experiences.

“I worked a lot of terrible jobs in factories,” Tate said. “At one point, I was working in an automotive casting facility where I was shaving hot metal off of aluminum transmission housings, and I was thinking, ‘Man, there has to be something better.'”

After Tate earned his GED, he enrolled at a local community college, taking night classes while working full-time. At first, he struggled with even basic academic courses.

“I was taking remedial math,” Tate said. “I’d never learned how to write an essay, so in English 101, I turned in an essay that was one big block of text. It took me a while to figure everything out, and I still struggle with some things, but eventually, I got there.”

Tate believes that his ability to overcome these hurdles comes from curiosity and a genuine love for learning. Eventually, he transferred to a state school and got a bachelor’s in psychology.

“At some point, I put the idea of pursuing a career in clinical psychology on the back burner—too much subjectivity and uncertainty for me,” Tate said.

He then met his wife, whose parents both have PhDs in human genetics from Johns Hopkins.

“As a first-generation college student, this was a different world for me,” Tate said. “I learned a lot about genetics through them. As I began to look more into a career in genetic counseling, it seemed like the ideal marriage of all the things I liked about psychology with some of the more substantial parts of science.”

This revelation inspired Tate to apply to KGI’s MSGC program. What appealed to him about KGI was the emphasis on diversity.

“I had interviewed at other schools, and they felt very rigid and academic,” Tate said.

“But after interviewing at KGI, along with looking at the current class profile and noticing all the people from different backgrounds—including older students and non-traditional students like me—I felt very welcomed.”

Although his first year at KGI has not been without its challenges, he believes that the support of his fellow students, professors, and MSGC Program Director Ashley Mills and Associate Program Director Emily Quinn has been instrumental in helping him succeed academically and develop a sense of community.

“Ashley and Emily are always responsive and available,” Tate said. “They’re fantastic as mentors, leaders, and as individuals. Also, Dr. Nicholas Gorman in our Research Methodology class has an excellent approach to teaching and education.”

Tate appreciates that because the MSGC program is new, faculty often request and are responsive to student feedback.

“Last semester, we had a winter workshop that was developed based on feedback that was received in the fall semester,” Tate said. “So that was a rapid turnaround.”

Now, Tate is paying it forward as he helps prospective students navigate the application process for genetics counseling programs, posting about his experience and answering questions on his Instagram profile. This includes writing a proper resume/CV, preparing for interviews, standardized tests, and national matching services.

“My process was a long, confusing journey,” Tate said. “The genetics counseling profession is so niched that it’s hard to find information about it.”

Thus, he started sharing information for applicants to help them navigate this uncharted territory and bypass some of the learning curves that he had to overcome.

“Jason is a wonderful and intelligent individual—incredibly thoughtful, with genuine kindness,” Mills said. “He is someone I respect a great deal and learn from with every interaction. Jason is a gifted and humble person who will continue to have great successes in life. He is an incredible addition to our genetic counseling program and family.”