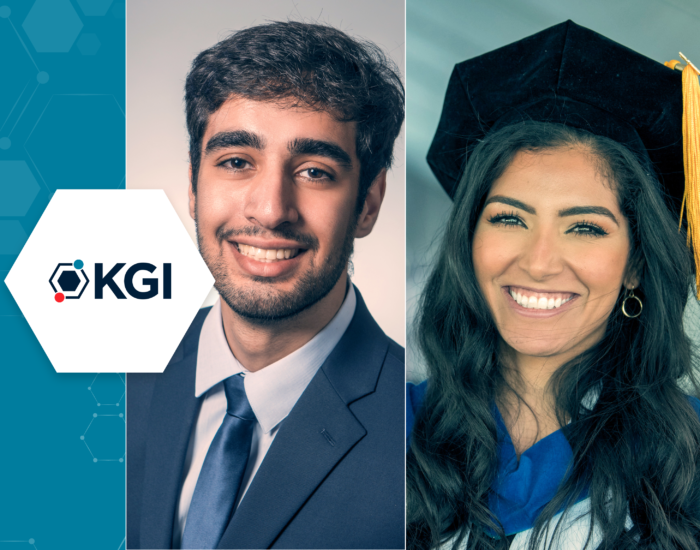 When Al Maghribi and Tizpa first met, they naturally connected, as both came from similar cultural backgrounds. Al Maghribi was born in Iraq, lived in Jordan for 11 years, and moved to Seattle, WA, when she was 18. Tizpa was born and raised in Olympia, WA, and his parents are originally from Iran.

Now their paths have crossed once again. Tizpa recently began his first year of medical school at Elson S. Floyd College of Medicine at Washington State University. At the same time, Al Maghribi has recently moved back to Washington to be closer to her family as she conducts clinical work as part of the COPE Health Scholars program and prepares to apply to medical schools.

In 2015, Tizpa had just completed his first year as an undergraduate at Pitzer College. He enrolled in KGI’s two-week SEHP program—which consists of personalized advising, conversations with various healthcare professionals, and guest speakers from different graduate health programs—to decide if he wanted to pursue a medical career.

He met Joon Kim, Senior Director of KGI’s Postbaccalaureate Programs, and shadowed different physicians. He learned what each specialty contributed to medicine and understood the work-life balance of being a physician.

“Overall, it was a great experience,” Tizpa said. “I got to meet a lot of people—including Abrar— and really connected with everyone there. I especially liked seeing older students who were part of this program, which gave me a perspective on what to expect. That definitely helped push me towards the medical field by the end of my undergraduate education.”

After graduating from Pitzer, he enrolled in KGI’s MSTM program. At that time, he loved medicine but was unsure if he wanted to pursue a more research-oriented career in the medical field or a career more focused on clinical practice.

“I thought the MSTM program with City of Hope was the best option for me since they incorporate a lot of state-of-the-art equipment and research in different areas like cancer, diabetes, and infectious diseases,” Tizpa said.

“I was able to network with a lot of well-known physicians, so it was a great opportunity for me to dive into the field.”

Ultimately, he decided that while he loved research and performed research for a cutting-edge treatment for brain cancer, he enjoyed the patient interactions more. This fueled his decision to move forward with medical school.

Although his medical school journey is just beginning and he is open to a wide range of options, he is leaning towards Medical Oncology or Hematology-Oncology.

“I spent two weeks with Eemon in our Summer Explore Health Professions program in 2015 and observed his impeccable work ethic,” Kim said. “So, I was naturally excited when I learned he was coming to KGI for our MSTM. Advising Eemon is a mentor’s dream because he sincerely listens to everything. He is going to be a superb physician!”

Al Maghribi’s journey has been a testament to her persistence and passion for the medical field. Upon moving to America at age 18, she spoke some English but still needed to master the language.

“When I started my undergrad at Eastern Washington University, I was older than my cohorts at that time because I had to retake two years of English classes,” Al Maghribi said. “Then, as I was finishing my bachelor’s, I knew I wasn’t ready to take the MCAT and apply for medical school. The language barrier presented a lot of obstacles.”

She began researching summer pre-med programs, which led her to KGI’s SEHP program. She especially enjoyed shadowing different physicians and interacting with Kim in the program, who showed them how to set personal goals.

“That really opened a lot of doors,” Al Maghribi said.

She then enrolled in KGI’s Postbaccalaureate Premedical Certificate (PPC) program, which helped prepare her for the medical school applications process and strengthen such skills as writing her personal statement.

“During the PPC program, I actually fell in love with research, and I stayed for the master’s program and then a PhD,” Al Maghribi said. “I got a lot of gray hairs, but now that it’s done, I miss it a lot. Actually, I don’t think I want to stop researching.”

One research project she collaborated on at KGI on a potential treatment for Alzheimer’s disease was published in a major scientific journal. Al Maghribi has always wanted to be a physician, and that goal still holds, but she plans to continue performing research as an MD, which she feels will strengthen her practice.

While pursuing her PhD, her research focus was on point-of-care detection for infectious diseases. Here, she witnessed firsthand the importance of research to serve unmet needs in the medical industry.

“A lot of procedures take too long, or they’re too painful for the patient, so you always need to find ways to maximize efficacy while minimizing any underlying effects,” Al Maghribi said.

“That’s why research is so dynamic. As a physician, research helps to expand your horizons and also educate the next generation of doctors on how to maximize efficacy.”

Now Al Maghribi is beginning a new phase of her life in Washington. She has just gotten married and plans to apply to medical schools soon.

“Abrar embodies resilience and compassion, which might seem mutually exclusive, but she is both,” Kim said. “She is tough and gentle, qualities that will serve her well for a career in medicine. I remember meeting her for the first time in the summer of 2015, and most recently, celebrating the completion of her PhD and wedding in San Diego.”