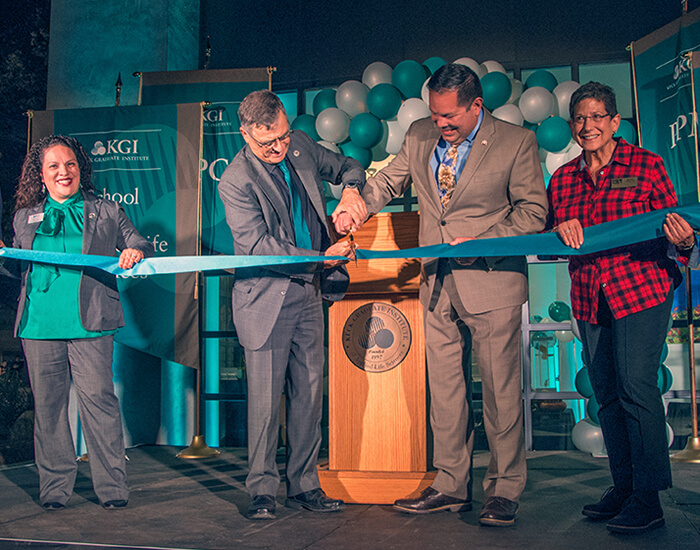 On the evening of Tuesday, November 15, 2016, Keck Graduate Institute (KGI) hosted the Claremont community for a historic ribbon-cutting ceremony at its new office spaces on the corner of North Indian Hill and First Street in the Claremont Village. The event celebrated KGI’s growth as an institution and its geographic expansion to the Claremont Village.

President Schuster welcomed the crowd that had gathered on the walkway and sidewalk outside. Schuster spoke about what the new building meant to KGI: “Looking beyond its physical space, this building is a testament to KGI’s growth as an institution.” Schuster talked about the benefits of KGI joining the Claremont Village. He explained that the design of the building’s interior was intended to inspire, motivate, and prepare students for success. The building features “a variety of spaces conducive to the collaborations and team projects that are a hallmark of a KGI education,” said Schuster.

While the deans held the ends of a teal ribbon, President Schuster and Mayor Pedroza took hold of the scissors, together, and cut through the ribbon. Later in the evening, while discussing the new space with guests, President Schuster said, “It’s a symbol—the ribbon. It’s cutting a ribbon with the past.” The ribbon-cutting symbolizes a new era of possibilities for KGI.

A tour of the new space followed the ceremony. The tour revealed student collaboration spaces, administrative offices, and conference rooms. Most rooms are equipped with whiteboard walls and updated technology to make it easy for students, faculty, and staff to communicate their ideas.

As guests mingled with students, faculty, and staff, they were offered refreshments, information about KGI, and the opportunity to purchase KGI merchandise from Huntley Bookstore.

The event also featured artist Michael Cooper, who drew a large whiteboard mural on the wall of the third floor conference room. Guests watched the mural unfold before their eyes, as they discussed KGI, science, and their connections to one another. The mural was a colorful interconnected scientific burst, which nicely mirrored the excitement and energy of the evening.