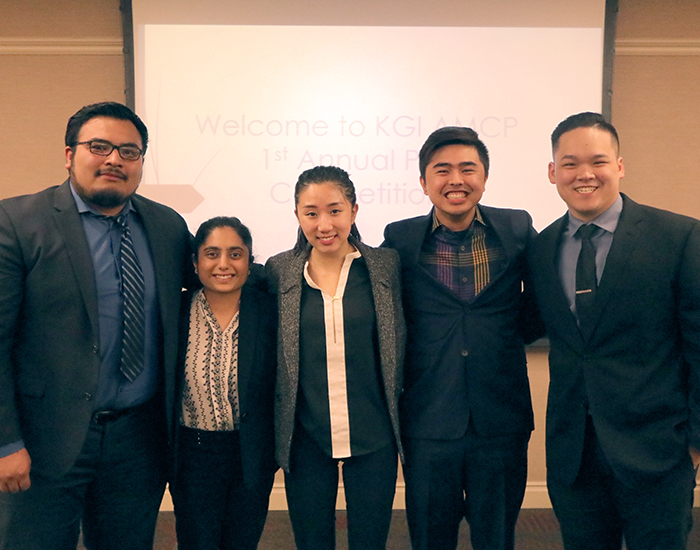 A team of students from Keck Graduate Institute (KGI) have been announced as finalists for the 20th Annual National Student Pharmacist Pharmacy and Therapeutics (P&T) Competition.

The team consists of Doctor of Pharmacy (PharmD) students Christy Wong, Diego Salinas, Joshua Liu, Nathan Vega, and Razina Pathan. Only eight schools are selected as finalists out of all the competing pharmacy schools nationwide, making this a huge accomplishment for KGI.

The team is waiting further instructions from Academy of Managed Care Pharmacy (AMCP) after the annual meeting – originally set for late April – was canceled because of COVID-19 concerns.

To advance to the finals, each team developed a formulary drug monograph for DUPIXENT, gathering and analyzing evidence for the safety, efficacy, and cost-effectiveness of the drug, focusing on the recently approved asthma indication. They then delivered a 25-minute presentation to the P&T Committee on their findings and recommendations.

KGI just recently formed their student AMCP chapter, and thus this was the first year KGI was able to participate in the competition.

“It has been a great privilege to have been able to accomplish this goal in the short lifespan of the KGI-AMCP student chapter,” Liu said.

They attribute this achievement to excellent communication and teamwork.

“I believe we owe our success to our dedication and commitment in going above and beyond as a team to achieve the goals we set for ourselves,” Pathan said.

“We support each other as a team and work together to overcome any obstacle that we have come across so far.”

“The team was incredibly well balanced, as we all had strengths in different areas,” Vega added. “It was a synergistic effort, given that we were able to pool our talents together to produce a well-rounded final product and presentation.

The team members joined the competition in order to expand their learning beyond the material covered in the PharmD curriculum, which includes pharmaceutical drug development, clinical trial phases, and regulatory components integral to drug approval. They were curious to learn more about what happens from the time a drug is approved until it is administered to patients.

“As a collective and as pharmacy students, we were interested in the criteria and steps involved in drug formulary placement,” Wong said. “This process, which occurs post U.S. Food and Drug Administration (FDA)-approval, is crucial prior to the patient care process.”

Participating in the competition has been highly instructive for the team members, shedding light on the factors a P&T committee considers when determining which medications a hospital or healthcare plan should adopt.

One challenge the team faced was encountering concepts they had not yet learned in school such as pharmacoeconomics and pharmacovigilance.

“Our team consists of first- and second-year pharmacy students, whereas the other teams we competed against had third- and fourth-year pharmacy students,” Liu said. “Because of this, we had to spend the first few weeks closing this knowledge gap by teaching ourselves about the drug’s mechanism of action, various economic models, and the disease state.”

Because the contest featured a real medication, along with guest judges from Kaiser Permanente, the students felt that it has been not only an enriching experience but one grounded in the realities of the pharmaceutical industry.

“The judges gave real world feedback about what actual Pharmacy and Therapeutics committees consider, and we were able to learn just as much during the presentation as we did while preparing our submission,” Vega said. “The experience was invaluable and will be an experience we can build upon in our careers.”