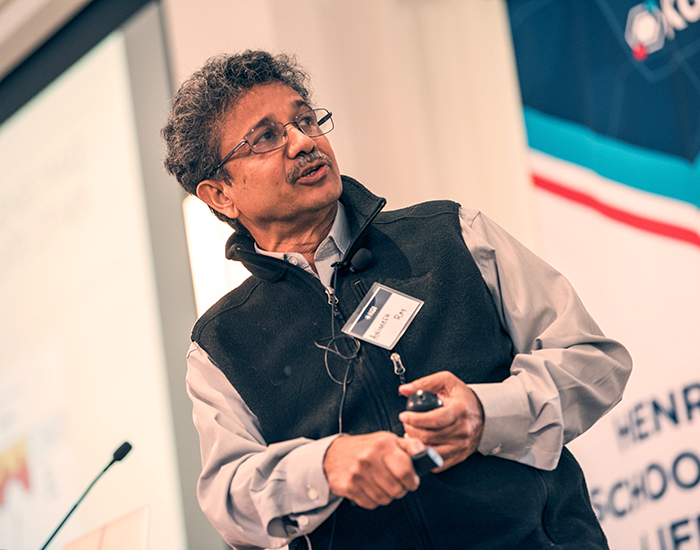 Keck Graduate Institute (KGI) Professor Animesh Ray has co-authored a paper with researchers at Johns Hopkins University on melanoma tumor growth, which appeared in the Journal of Investigative Dermatology. The team was led by Dr. Ranjan Perera of Johns Hopkins. They demonstrated that a non-coding RNA, microRNA-211 (miR-211), is central to the formation of drug-resistant melanoma cells and illustrated the molecular mechanisms behind the formation of drug resistance.

Aggressively spreading melanoma is a dangerous cancer that kills nearly 75 percent of patients within five years. Even with the use of targeted chemotherapy drugs such as Vemurafenib and Cobimetinib, most patients return with drug-resistant distant spread of the cancer within two to three years.

This new research indicates a target for overcoming resistance. Interestingly, some of the findings contradict a crucial prediction made by Ray and his colleagues, who were then at Sanford-Burnham-Prebys Medical Discovery Institute, four years ago.

MicroRNAs play an important role in the formation of diseases such as cancer because they have the ability to regulate genes in a graded manner, unlike other gene regulators which operate more like on/off switches. Ray and his colleagues became interested in miR-211 due to its connection to the synthesis of melanin and its absence in some melanoma tumors.

“In normal skin cells, miR-211 concentration level is very high,” Ray said. “But in certain cancer cells in tumors, we found—not in all tumor cells, but in some tumor cells—miR-211 level was very, very low.”

This led them to suspect that increasing the concentration of miR-211 in the cells would inhibit their cancerous growth. The mechanism behind this effect is the metabolism of cancer cells, which is different from normal cells in that even in the presence of oxygen, cancer cells can perform lactic acid fermentation.

“We showed in a publication in Molecular and Cellular Biology in 2016 that this microRNA is a crucial regulator of this effect, and when it is overexpressed artificially, it seems to prevent this so-called Warburg effect,” Ray said. “So if we artificially increased its concentration, then we should anticipate the tumor to shrink.”

However, their latest study, in which immunocompromised mice were implanted with human melanoma cells, revealed the exact opposite conclusion. The tumors became massive and much more aggressive than those produced by the original tumor cells that had low expression of miR-211.

“In science, when such a clear-cut prediction goes wrong and exactly the opposite happens, it creates a paradox, and almost all good science begins with a paradox.”

“In the 2016 paper, we proposed that according to the model, when miR-211 is increased, the tumors should regress, and indeed tumorous cells in vitro became non-tumor like, but when implanted into the mouse, it changed its behavior completely and exactly the opposite happened,” Ray said.

Thus, the genetic mechanisms can differ from patient-to-patient. In the case of chemotherapy drug Vemurafenib, they found that miR-211 was regulating some of the genes involved in Vemurafenib resistance.

“A hyper expression of miR-211 is going to hyperactivate the pathway that is being blocked by the drug,” Ray said. “So you need a higher concentration of the drug to block the tumor—so high that it’s probably going to be toxic to the patient.”

This is where precision medicine comes into play. Determining a patient’s genetic profile can help doctors to determine the best treatment.

If a patient has a high level of miR-211, then prescribing Vemurafenib may not be a good approach. In other cases, adjustments may need to be made.

“Hopefully based on this work, one can do some preclinical work in terms of dosing with Vemurafenib and looking at miR-211 expression levels in patients’ tumors to find a better algorithm for treatment and dosing of such patients so as to increase the time during which Vemurafenib remains active in such patients,” Ray said.