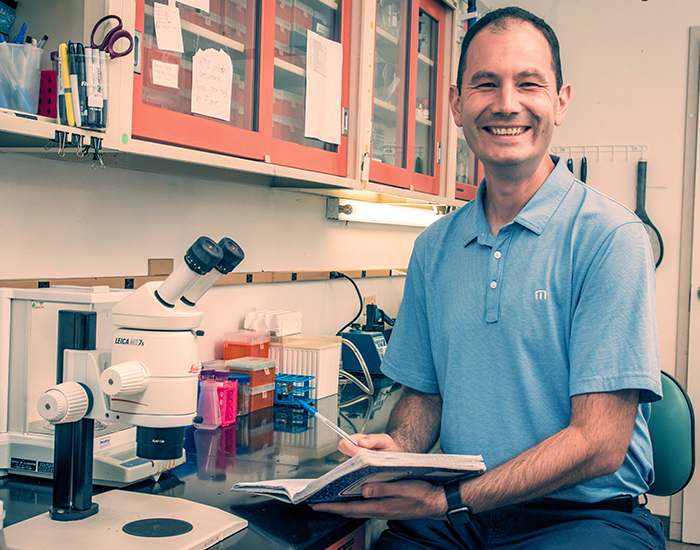 CLAREMONT, Calif. – Whether he is focused on identifying a potential therapy or studying pathogens in nature, Mikhail Martchenko Shilman is dedicated to treating infectious diseases.

Professor Jim Sterling, a founding faculty member at KGI, says of Shilman, “I was excited to have Mikhail join KGI as an accomplished biologist focused on drug discovery. His interest in translating his discoveries into commercial applications fits really well with KGI’s culture and mission.”

Through his research, Shilman discovered that Bithionol, a drug previously approved to treat parasitic worms, could combat the Zika virus and a botulinum neurotoxin. The associate professor in KGI’s Henry E. Riggs School of Applied Life Sciences has also demonstrated that Amodiaquine, a drug used as an antimalarial agent, can be used to treat infectious diseases such as the Ebola virus and anthrax.

“I take old drugs and find new indications, repurposing them to act as host-oriented drugs.”

“If you attack pathogens directly, they mutate and become resistant to drugs, so instead I target host proteins exploited by pathogens. The advantage is that the therapy can block multiple pathogens that exploit the same pathway,” explains Shilman, who has been investigating host–pathogen interactions since his postdoctoral fellowship at the Stanford University School of Medicine.

In his initial research using Bithionol, Shilman introduced the drug immediately after infection. Now he is seeking to determine its effectiveness when administered hours later, and whether it can work against all botulinum toxin serotypes. Shield Pharma, the company he and KGI Professor of Innovation and Entrepreneurship Joel West formed in 2014, recently received a one-year Small Business Innovation Research (SBIR) grant from the National Institutes of Health (NIH) for this purpose.

“We’re doing the proof of concept for the government now. It’s a collaboration with the USDA (U.S. Department of Agriculture) lab in Albany, CA, the most recognized lab in the United States working with botulinum,” says Shilman, who is monitoring the testing conducted at the USDA laboratory. At the same time, he is continuing research he began two years ago in a related area: the transmission of pathogens in nature, particularly by insects.

“Scientists have started noticing that wildlife in savannas is dying rapidly because of anthrax. Flies, which feed off the carcasses of infected mammals and spread the disease, are the culprit,” explains Shilman.

He has developed a model system in his campus lab to examine why flies transmit the disease but don’t die, studying the effects of anthrax toxins on fruit flies. With fellow faculty member Anastasia Levitin, Shilman is also looking at how other insects communicate disease and recently created the first mosquito laboratory at KGI.

“Having a mosquito lab is a great resource for KGI and can open up other research,” he says, noting his faculty colleagues could also conduct experiments in the space. A KGI faculty member for six years now, Shilman anticipates continuing to pursue his two distinct but connected research directions.

“I need the two to balance myself. I need that balance between the academic and applied,” he says.