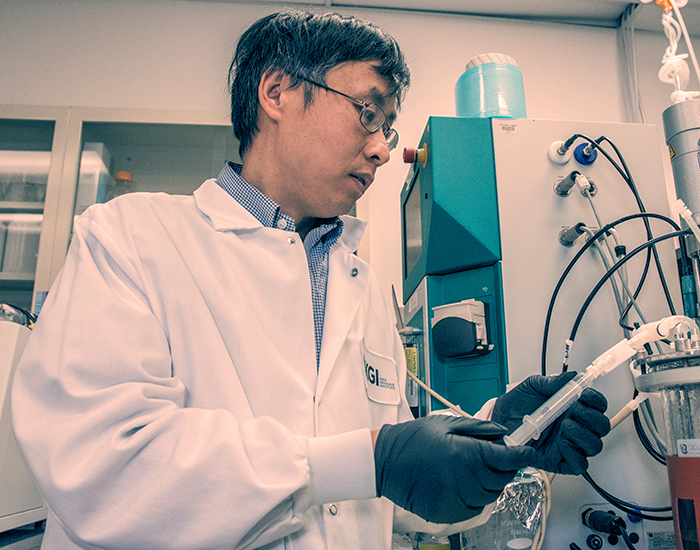 The first publication covered a study in which a thermosensitive hydrogel was prepared and successfully used for different 3D printing methods, including single nozzle extrusion printing, coaxial printing, and hybrid printing. This study was significant because most commercial bioinks are either photosensitive hydrogels using UV light to initiate gel formation or alginate-based hydrogels formed by ionic bonding.

Few bioinks are composed of thermosensitive hydrogels that could form a gel by simply varying the external temperature within a physiological range for 3D bioprinting. Thus, this study explored the feasibility of printing a thermosensitive hydrogel applied to 3D culture of different cell types, which was further evaluated by constructing multi-layered skin grafts through 3D printing of this hydrogel with different skin-related cell types.

These bioengineered skin constructs could be used as potential implants for serious skin injuries and would be more effective than conventional wound dressings. They could also be used for cruelty-free cosmetics and drug testing, eliminating the need for animal subjects.

The next step for KGI is acquiring the proper equipment. Currently, the printer needed to perform this type of operation is available in China, so they modified a homemade printer for the study.

“We had the idea for this concept back in 2015, and the study is still in its early stages,” Zhang said. “But now the feasibility has been demonstrated.”

However, the lack of knowledge about the complex fluid flow environment prevailing in wave bag bioreactors has so far hampered the development of a scientific rationale for their scale-up. This study used computational fluid dynamics (CFD) to investigate the flow field’s details in a 20-L wave bag bioreactor as a function of rocking angle and rocking speed, which could then be correlated to a smaller or larger bioreactor environment.

The paper has taken well over two years, from the time they built the model, prepared for and conducted the study, recorded the results, and finished the manuscript.

“I think it’s a good sign that after we got published, a newsletter called Aspen featured the abstract to our paper,” Zhang said. “We will continue to work on this to characterize the system and hopefully develop better prediction capacity of this framework over time.”