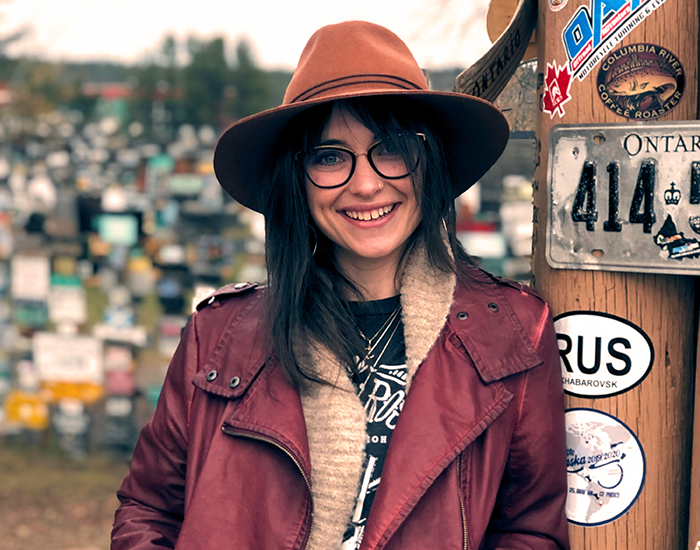 Keck Graduate Institute (KGI) student Amanda Miller, PPC ’21, is a true Renaissance woman, skilled in art, singing, archery, fishing, and construction, which she learned from her family and upbringing in Alaska. Starting her undergraduate career as an Art and Business major, she had the goal of becoming an Art teacher and owning her own studio until medicine presented itself as the focal point of all her interests.

This revelation came to Miller while waiting in the pre-op bay of her local hospital. With a second colon cancer diagnosis in the family, her father required early screening. She was his caregiver for the day.

“Sitting there, I felt the energy build as everyone around me worked together to investigate and find solutions to what was going on for each patient,” Miller said. “I realized that day that art was my escape and my joy, but the creativity and the thinking-outside-of-the-box aspects were just as applicable to medicine. That moment was pivotal. I still get goosebumps thinking about it.”

For Miller, medicine also taps into her passions for creative problem-solving and working with her hands. In many ways, these principles connect to Miller’s experience building houses for her father’s company. She can walk through the bare-bones structure of a home after the initial construction phase, observing how all the rooms flow together and anticipating what the final product will be and how it will function.

As an undergraduate, Miller transitioned to the pre-medical path by majoring in Health Sciences, minoring in Psychology, working as a Scribe in the Emergency Department of Alaska’s largest hospital, and stepping into a leadership position as the vice-president of her sorority.

“I quickly found that being a doctor would allow me to make connections with people and provide them with access to services they need,” Miller said.

After graduating in 2017, Miller continued to gain clinical experience while also preparing for the medical school applications process. Meeting her fiancé on a fishing boat in San Diego, she eventually moved to California to continue her education. At that point, she found KGI’s Postbaccalaureate Premedical Certificate (PPC) program.

“I knew immediately that this was the path I was meant to take, and I was excited to find and meet others who, like me, needed a little extra guidance,” Miller said.

Shortly after she got accepted to KGI, news of the pandemic and lockdowns spread.

“I moved here knowing no one except my fiancé’s family and friends, and I was expecting to go to school and make all these connections,” Miller said. “Still, going to school virtually, I’ve been amazed by the number of connections that I’ve been able to make through online classrooms and networking.”

Miller feels that PPC Director and Assistant Director Joon Kim and Elba Muñoz have helped ease her transition back into a learning environment after being away from school for three years.

“Joon and Elba have been beyond helpful and are everything that I needed and wanted in an advisor and program director,” Miller said.

When it comes to her career plans, Miller initially gravitated toward the ER, thriving in the fast-paced atmosphere. Now, though, she feels most drawn to OB-GYN after being exposed to this area of medicine in her current job as a Scribe for a women’s medical group in Southern California.

“What I love about OB-GYN is that it gives you the ability to help women learn about their bodies and feel comforted and understood through the most important—and sometimes scary—times of their life like puberty, pregnancy, and menopause,” Miller said.

In a way, Miller’s newfound desire to pursue a career as an obstetrician-gynecologist makes sense, as her entire life has revolved around the theme of female empowerment. For nearly a decade, she worked as a lead sales associate at a store in Juneau, Alaska, that features local artists and boasts an all-female staff.

“I’ve always had these strong female role models,” Miller said. “My mom was a single mom and did most of my raising, and then as a young adult, I found this store and group of ladies who, now looking back, literally made me into the woman I am today.”

Reflecting on the leadership role she played in her sorority and the connections she has been able to make with her female peers and advisors since, Miller found that “being able to counsel, teach and guide other women comes naturally, so being an OB-GYN just makes sense.”

Now Miller is applying to medical schools and leaning toward UC San Diego, which she feels reflects the diversity of her home city, Anchorage, and aligns with her goal for compassionate medical care.

“I have enjoyed getting to know Amanda and learning more about her special interests, and she will make a wonderful health care provider soon!” Muñoz said. “She is a person of immense strength, and her great optimism in life is super contagious. I am excited to see where she will be attending medical school!”