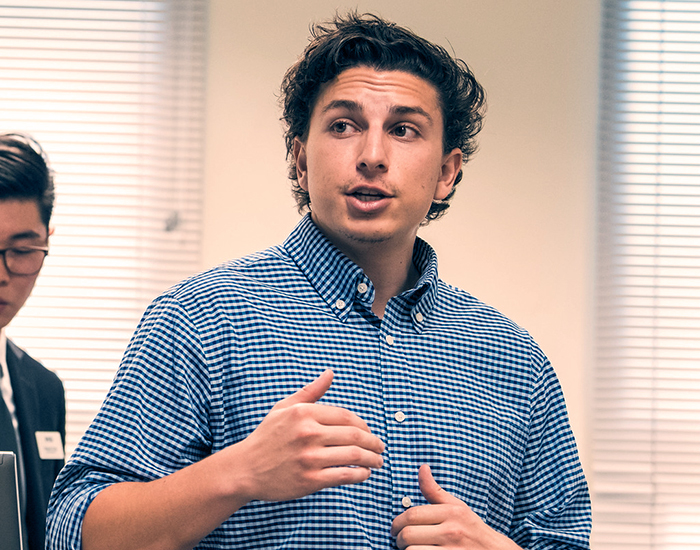 Keck Graduate Institute (KGI) Master of Engineering in Biopharmaceutical Processing (MEng) student Brian “Fishard” Hogan, MEng ’20, envisions a new kind of energy drink—one where the onset and offset curves are less steep, avoiding the inevitable crash. His concept plan for this neurostimulating, cannabidiol-based energy drink earned him a spot at the finals of the 2020 Kravis Concept Plan Competition, an entrepreneurial contest for students and alumni of The Claremont Colleges.

Caffeine is effective for quick bursts of energy but not for sustained focus. This is where Hogan’s energy drink comes in. Unlike coffee, it nourishes the body and brain and has a more gradual effect, which means that you will not experience the wave of fatigue that follows the initial jolt.

“For that come-up experience and come-down experience, the boundaries are slimmed a little bit so that a greater population can use the actual product,” Hogan said. “5-hour Energy is great if you’re going to be playing soccer for two hours, and then you’re going to have time for a nap. For a lot of people, that’s not the case…You don’t want to jeopardize tomorrow or the next few hours to just boost now a little bit.”

Because the scope of the Kravis Competition is broad and entries are not restricted to the sciences, Hogan wanted a marketable, easily produced product that would leverage his contacts and personal network. He had previously worked with a bell pepper extract known for enhancing visual acuity and used the same research methodology on his studies of cognitive/energy boosters.

“A lot of our participants would come in already tired, and in our exit survey, they’d say, ‘Yeah, I’m really sleepy…I don’t really want to do the test,'” Hogan said. “But if you give them an energy drink 30 minutes before they start, you can see qualitatively that the people aren’t tired anymore afterwards…Quantitatively you can see which group had improved scores.”

Overall, then, the drink is not only providing an energy boost but also leading to cognitive and physical improvement as well as mediating the stress responses associated with using your brain and body. The drink is intended to be consumed in 4oz. servings and targeted toward key moments such as late-night study sessions when the brain needs to be refreshed, thus making it more cost effective for the consumer.

Although his MEng degree seems unrelated to this project, Hogan does see areas where they align, specifically when it comes to dealing with regulatory hurdles and making key manufacturing decisions such as manufacturing in-house or partnering with an established manufacturer.

The Kravis Competition finals will be held online on April 3 and include a 15-minute presentation followed by a Q&A. Winners will receive funding for their business venture.

“Winning this prize money would actually help us get off the floor and be able to drive this into the direct-to-consumer phase as early as summer, which would be nice.”

“They’ve made applying for things like this easy and almost straightforward,” Hogan said. “A lot of the fog of war had already been elucidated.”