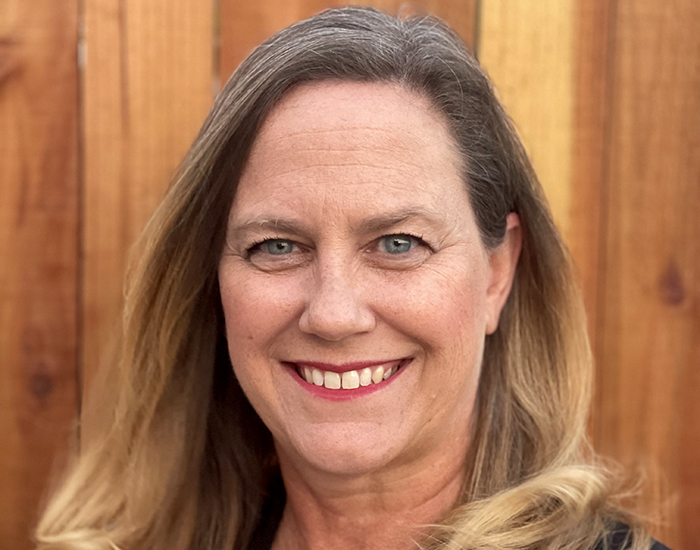 After being out of school for 25 years—raising and homeschooling her five children during the interim—Tamerisa Dyer, MSGDA ’22, is finishing up her first year in Keck Graduate Institute (KGI)’s Master of Science in Human Genetics and Genomic Data Analytics (MSGDA) program.

Dyer graduated from UC Davis in 1994 with a bachelor’s degree in genetics. She then took time off to raise her children.

“At one point—when the youngest was a baby—I also had a high schooler, a middle schooler, an elementary schooler, and a toddler,” Dyer said. “Those days were organized chaos.”

Dyer also spent eight years as a high school biology and chemistry teacher. Once her children had left home—save for the youngest, now a high school freshman—Dyer decided to pursue a graduate degree.

“I honestly couldn’t get the program out of my mind,” Dyer said. “It sounded very intriguing.”

“Ultimately, that was the program I ended up deciding on because it was so fascinating to me how it opened up all these worlds of possibilities.”

After being away from school for so long, Dyer was eager to dive back into academics and get as much as possible out of the KGI experience. She has particularly enjoyed classes with Fortini and Assistant Professor of Genetics Dr. Barbara Bailus.

“I’ve loved how Dr. Fortini challenges you to work harder than you ever thought you could,” Dyer said. “It helps you to identify who you’re truly capable of being. I also enjoy Dr. Bailus’s style of teaching. There’s a lightness and fun she brings to it.”

Another highlight for Dyer has been mastering programming languages like Python. Before attending KGI, she had never felt comfortable with technology.

“Overcoming that self-doubt was powerful and exciting for me to do,” Dyer said. “It helped me to grow as a person.”

Because her first year at KGI has been a primarily virtual experience, Dyer acknowledges that it was challenging to build relationships with classmates initially.

“Normally, you’d be walking out of a class, and you’d make small talk to pass the time,” Dyer said. “But when your class is over on Zoom, there isn’t a chance for that small talk that is so fundamental to starting these relationships.”

However, over time her class has gotten creative in how they form groups and conduct Zoom meetings. At this point in the year, they have built solid friendships and bonds with one another.

“If anything, it’s been positive because it has allowed me to continue homeschooling my youngest, and it’s freed up my time to do more,” Dyer said. “So, in some ways, I now see how the virtual learning experience has been a gift for me.”

Currently, Dyer is considering a career in research and development.

“Twenty years ago, I wasn’t that interested in research,” Dyer said. “But now I’m starting to be intrigued by the idea of being part of a team making cutting-edge discoveries. That realization wouldn’t have been possible without this program.”

Dyer is particularly drawn to cancer research—an area of particular significance to her—as one of her children was born with a brain tumor. Through Bailus, Dyer has learned more about rare diseases and would be excited to work in that area as well, as she sees many parallels between her own experience and those of families where children have been diagnosed with rare diseases. She appreciates how genetics testing has facilitated so many advancements in recent years, bringing hope to families.

“As a mom, those moments where hope was given to me were so important and kept my family moving forward,” Dyer said.

Working in rare diseases or cancer would provide her the opportunity to give that same hope to another family.

“Tamerisa is an amazing addition to our MSGDA program,” Fortini said. “I am impressed by her courage to change careers and follow her passion into a new field. In the classroom, I always appreciate her wise feedback that allows me to grow as an instructor. I cannot wait to see where this new career path takes her.”