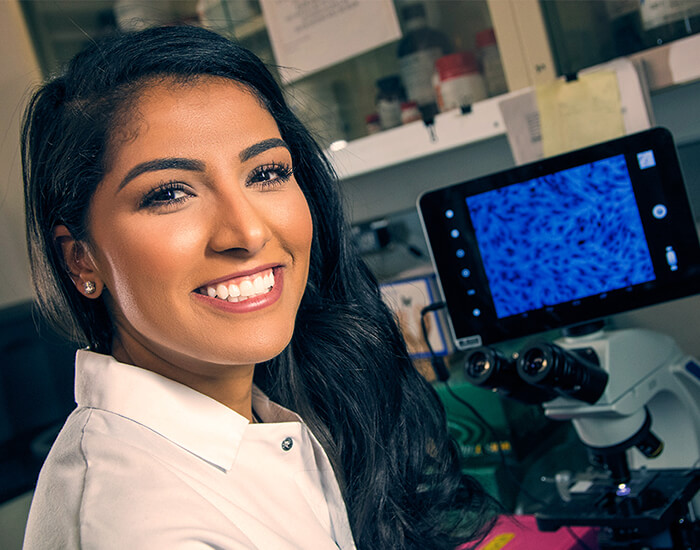 Abrar Al Maghribi is one of 175 KGI students who will be graduating this weekend. To view more info on commencement, visit kgi.edu/commencement.

Like other students, Abrar Al Maghribi came to the Postbaccalaureate Premedical Certificate (PPC) Program at Keck Graduate Institute (KGI) to strengthen her academic credentials, prepare for the MCAT exam, and submit a successful medical school application. But little else in her life leading up to this week’s KGI Commencement ceremonies has been typical.

Al Maghribi was born into the fear and deprivation of Saddam Hussein’s Iraq, where her father was twice imprisoned without cause and lost two of his brothers to war. By the time she was seven years old, her family had sold everything they owned and fled to Jordan. When they could no longer afford the fees required to remain in the country, they stayed on illegally. But her father’s status was discovered, and he was sent back to Iraq in 2003. For years afterward, his wife and four children were alone in Jordan.

Through it all, school was her haven. Al Maghribi says, “My mom raised us with so much pride. No matter if we were poor, we would go to school, and we were clean and polite.”

Science was always a favorite subject, but her mother’s breast cancer scare when Al Maghribi was 12 prompted her desire to become a doctor. She explains, “That triggered in me how important healthcare and medicine are, and to provide care regardless of legal status.”

But as an Iraqi without legal standing, she would be unable to continue on to college in Jordan, and her mother saw little promise for the family’s future there. They sought refuge in another country, imagining that they would join many other Iraqi families in Scandinavia. After six years of waiting and three months before Al Maghribi would have finished high school, they received news of a different destination: Kent, Washington.

“My mother was really nervous. The only things we knew about America were from action movies,” Al Maghribi recalls. “I spoke a little English because I picked a science major in high school, and English was one of the requirements. That helped the family a lot at that time.”

She would spend two more years studying the English language and completing requirements for a U.S. high school diploma, graduating at age 20. There and at Eastern Washington State University, where she would major in biology as a premed student, Al Maghribi was learning in a new language while facing an unfamiliar academic and social environment.

“There was a language barrier. I didn’t understand what the teachers and professors were saying, and they were unaware of what I didn’t know,” she explains. “In the Middle East we don’t ask questions, we do whatever teachers say. The learning style is so different. I still struggle with that.”

Nonetheless, she persisted and progressed, and began adapting to her new culture. She became a U.S. citizen and college graduate. Then she completed two summer internships for students interested in medicine, at the University of Kansas and KGI, before enrolling in the PPC program.

“It took me six years to get my undergraduate degree. I didn’t think I was ready to just jump into medical school,” says Al Maghribi.

At KGI, she is involved in research as well as classes, working on a study related to Alzheimer’s disease. She plans to submit her medical school applications this summer and stay on at KGI for a second year to complete a Master of Science degree and thesis while waiting to hear where she might train as a doctor.

“I love the whole environment and the encouragement at KGI. Every professor pays so much attention to the students, and they believe in me. They know I can be a doctor and are helping me be a doctor,” Al Maghribi says.

She counts Professor Angelika Niemz, who taught her medical diagnostics course last fall, among the supportive faculty members she has met at KGI. Niemz expresses equal admiration for her student, saying, “Abrar has persistence and resilience, and she’s always optimistic. I think she’s someone who has shown she is extremely capable of becoming a doctor. She cares about people and is willing to listen. In terms of becoming a doctor, that is incredibly valuable.”

Niemz was also impressed by Al Maghribi’s decision to share her life story with the KGI community, calling it “brave and powerful.” That so many at KGI chose to attend the presentation was both surprising and gratifying to Al Maghribi, who says, “Even thought I always find love and support at KGI, after that I found even more love and support. It was great.”