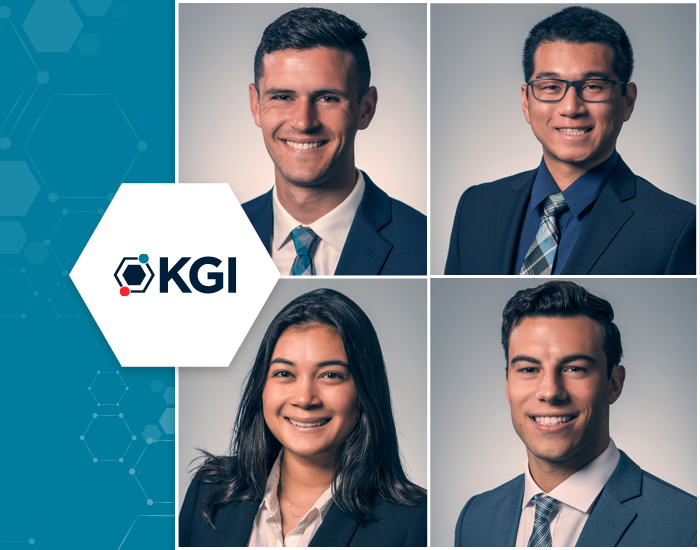 A team consisting of Keck Graduate Institute (KGI) students Gabriella “Mihanna” Alden, Eric Young, Quinn Levin, and Erick Yeh have qualified for the 2020 Kravis Concept Plan Competition finals, which will be held online on April 3. This competition, geared toward students and alumni of The Claremont Colleges, rewards aspiring entrepreneurs whose concept plan demonstrates a product’s marketability and measurable benefits to society.

The students are currently taking the class ALS 458 Applied Entrepreneurship together. Alden, Young, and Levin are all Master of Business and Science (MBS) students, while Yeh is a Master of Science in Applied Life Sciences (MS) student with a Clinical Research Thesis concentration.

For their class, the team created a business plan for an existing biotech startup called Westwood Bioscience out of UCLA, which they then submitted to the competition. Westwood focuses on nanomedicine and encapsulated drug delivery for chemotherapy, specifically for treating pancreatic and colon cancer.

The team is working on attaining Series B funding for the company. Westwood’s main product, the Silicasome, is a mesoporous silica core (resembling a hollow glass bubble) that functions as an artificial liposome to deliver drugs directly to cancerous sites.

Silicasomes are safe and biodegradable, allowing for delivery of current chemotherapeutic drugs without the debilitating systemic toxicity typically caused by chemotherapy. It’s also potentially more effective than its competitors due to its stability and ability to deliver higher amounts of the drug without leakage into the surrounding tissues.

Because the Kravis Competition has a broad focus on entrepreneurship across a range of industries, one of the team’s challenges has been preparing their concept plan for judges who may not be as familiar with the pharmaceutical industry as KGI faculty is.

“A large part of this project is understanding strategically how we would go about evaluating a potential exit for the company because at the end of the day, that’s how you’re getting the return on investment,” Levin, MBS ’20, said. “Part of the challenge is that there’s not one cut-and-dry exit opportunity. There are multiple exit opportunities for this therapeutic and multiple potential indications for the Silicasomes—not just in pancreatic cancer.”

Another challenge has been presenting their timeline to the judges.

“We are very familiar through KGI with explaining how long it takes for a drug to go from preclinical trials through clinical trials to approval until it’s commercialized, and we know that can be a 7 to 10 to 15-year process, but the audience within the Kravis Competition might not be as familiar with that,” Alden, MBS ’20, said. “So we have to be strategic about how we choose to communicate when we decide to exit and when we decide to ask for money because this is an extended timeline versus a lot of the other projects that we’re going to be competing against.”

Typically, a company’s product can generate revenue within a couple of years. The Silicasome, by contrast, will not likely earn profits until around 2030. Thus, the team had to figure out how to explain to the judges why the drug was still a valuable investment.

Additionally, the team learned how to communicate complex scientific concepts to a lay audience. Overall, preparing for the competition revealed many insights about the entrepreneurial side of the industry.

“For me in particular, because my focus is geared towards clinical science, I learned a lot about the financial aspects of the pharmaceutical industry and also gained a broader knowledge of the entire field in general,” Yeh, MS ’20, said.

Young, MBS ’20, found the project eye-opening in terms of how much goes into starting a company.

“You don’t realize how many steps there are to it—what phases you need to plan for and what phases people are expecting you to know about,” Young said.

Most importantly, they learned that the products that succeed are those that solve pressing problems.

“We’re very grateful to have been paired with Westwood Bioscience and been able to work on a cancer drug because cancer is such a terrible disease and has such a high unmet need, specifically pancreatic cancer,” Alden said.