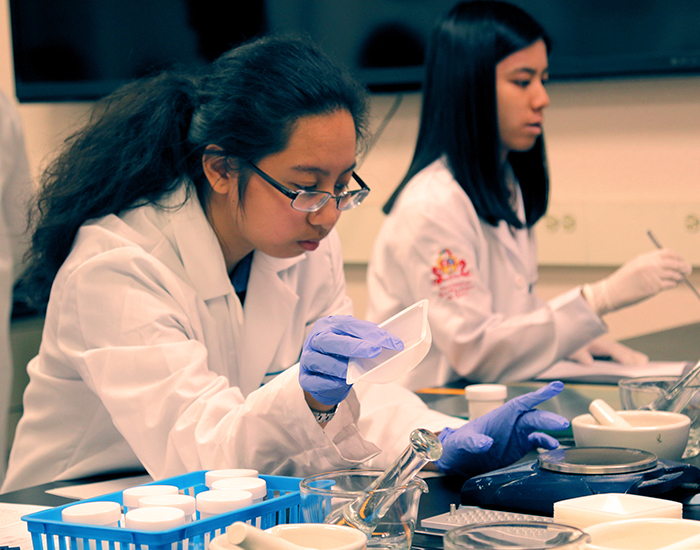 This story was first published in the 2019-20 Annual Report.

In KGI’s five-day Pre-Pharmacy Enrichment Program (PrEP) this past summer, prospective students explored the pharmacy profession through interactive classes, lab breakout sessions, and round tables with KGI staff and alumni. This year, the program was held online due to COVID-19, and each participant received an at-home kit for the lab sessions. PrEP is co-directed by Christine Cadiz, Associate Professor of Clinical Sciences, and Derick Han, Associate Professor of Biopharmaceutical Sciences.

“Most people think pharmacists only work in retail stores like CVS, but a Doctor of Pharmacy degree can lead to job opportunities in hospitals, biotech, and drug companies,” Han said.

“Our program brings pharmacists, including many recent graduates from KGI, from many backgrounds, to discuss all these job opportunities given to pharmacists.”

Sahira Lorenzo Aguilar, a rising senior and Chemistry major at Cal State Channel Islands, has been drawn to the profession since going to the pharmacy with her mother as a child.

“I would see the guy behind the counter dressed in white, and I’d always wonder, ‘How come he’s putting so many pills in there, and how does he know the quantity?’” Aguilar said. “And I would be the translator for my mom because she only spoke Spanish.”

Karen Ly, a rising senior and Biochemistry major at Cal State LA, was also attracted to the profession from an early age.

“When my grandparents were sick, we would go to the pharmacy a lot, and I would look at the descriptions on the pill bottles,” Ly said. “I didn’t know what they were, but that intrigued me more since I really wanted to help people.”

During PrEP, Ly appreciated learning about all the opportunities for pharmacy students, specifically rotations.

“I thought those only pertained to nurses,” Ly said. “What excited me was that they worked with patients closely, and they told us how some patients look forward to talking to you because you make that personal connection.”

“Not only did she describe the crisis, but she also gave a solution,” Aguilar said. “I could see how passionate she was during the presentation and when we were asking questions. I saw that from every single presenter.”

At PrEP, students discovered the variety of career pathways for pharmacists.

Ly learned about behind-the-scenes careers in pharmacy, which influenced her desire to pursue a job in industry.

“After I graduate, I want to become a pharmacy tech so I can get hands-on experience in the field and then go along the pathway to get into pharmacy,” Ly said.

For Aguilar, attending PrEP made her more confident about applying to pharmacy schools.

“Before KGI, I thought it was impossible—that I didn’t have the background of a pharmacist,” Aguilar said. “But this year, I set my mind to it.”

As a pharmacist, Aguilar wants to serve her community. She is able to understand Spanish, English, and Mixteco—a dialect—which would allow her to reach more people and help them feel comfortable.

“PrEP was really an eye-opener for us,” Ly said. “It shifts your thinking process about pharmacy school in general and how you perceive pharmacists and what they do.”

For Aguilar, the enthusiasm of the presenters was contagious.

“I would like to encourage anyone in the future to apply because this program was amazing,” Aguilar said. “Even though it was virtual, I really saw passionate people in this program and mentors who just wanted to showcase all the knowledge they had. It was exciting and fun, and the presentations were really informative.”