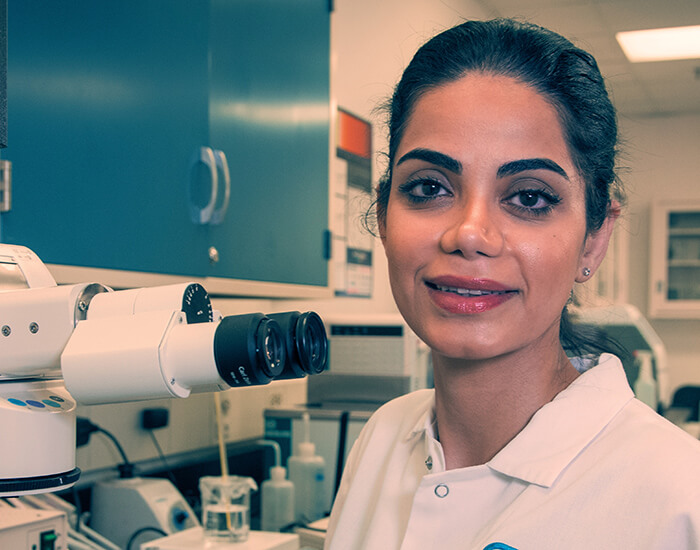 Kiana Aran, Assistant Professor of Medical Diagnostics and Therapeutics at Keck Graduate Institute (KGI) and Co-founder and Chief Scientific Officer of Cardea Bio, recently received the Pinnacle 2020 award, which is given to women in STEM leadership positions. Aran is the inventor and developer of the CRISPR-Chip, the first CRISPR-powered transistor which allows for fast detection of heritable disease variants like muscular dystrophy.

At Cardea Bio, Aran and her team are currently expanding the CRISPR-Chip for different applications including a quality control automated system for CRISPR applications in various fields including diagnostics, therapeutics, and agriculture.

“You can monitor the stability of the CRISPR complex in various environments, or you can monitor a sequence in the gene before you did anything to it, and then you monitor it afterwards to see if you have done the editing sufficiently,” Aran said.

The CRISPR-Chip uses Cardea’s proprietary transistor technology. The same transistor technology can also monitor protein to protein interactions and measure the antibodies in your blood, making it ideal for COVID-19 diagnosis. This allows for digital monitoring of the disease and provides a testing technology that can be used for tracking and biosurveillance.

“Additionally, we can develop multiplex chips for multiple analytes that can be reconfigured easily to any form factor,” Aran said. “That means that you can have a small chip with hundreds or thousands of transistors on them. Each of these transistors can monitor one thing. It can monitor protein, small molecules, and DNA. You can also reconfigure your system by putting the chip in a handheld system, in a benchtop instrument, or in a robot.”

This multianalyte configurable system can help us to understand the pathology of diseases. Not only can it measure gene or genetic mutation, but it can also measure the downstream expression of the proteins associated with the gene.

Aran has a background in electrical engineering, and her passion for biotechnology began when she started seeing parallels between our body and an electronic circuit.

“You have wires and signals or electrical charges going between different components of a circuit,” Aran said. “Within our bodies, there is the same thing. Our cells within different organs communicate with each other through molecular charges such as proteins, DNA, RNA, and exosomes.”

Aran has also been involved with outreach work with BuildOn, an organization that builds elementary schools for rural villages in Africa.

“The beauty of those elementary schools is that Build On provides staff to help you build the school, but the villagers also have to help build,” Aran said. “So it gives the villagers a sense of ownership and desire to not only send their children to school but also attend the after-school adult programs themselves. I can’t explain how fun those experiences are, being a part of a fun activity and seeing the impact.”

Aran has been a strong advocate for empowering females in STEM without giving them preferential treatment.

“As women, we need to focus less on blaming the society for all the things we don’t have,” Aran said.

“We should do our best to take advantage of all the potential possibilities in front of us, remain focused, remain resilient, and move forward, and nothing can stop us if we don’t decide to stop.”