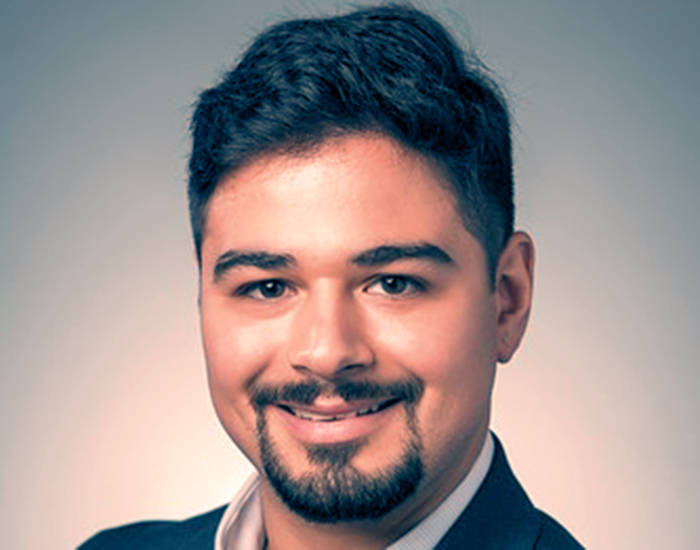 For many students, Keck Graduate Institute (KGI) is more than just a school. It is a home away from home where they can forge lifelong connections and embark on a journey of transformation. Such is the case for Zaed Hindi, MS ’21, whose enthusiasm for KGI inspired him to become an Admissions Ambassador to spread awareness of the institute’s name and mission.

Being able to form these connections is particularly meaningful for Hindi, who is on the autism spectrum and struggled to relate to his peers growing up. As a young child, he was overwhelmed by sensory overload and social situations.

“I still remember the first time I encountered someone who noticed my differences,” Hindi said. “I blurted something out, and the first words out of her mouth were, ‘What’s wrong with you?’ and then she just walked away. That kind of interaction to a seven-year-old is definitely going to be traumatizing.”

After this experience, Hindi became shy and withdrawn. Eventually his mother enrolled him in a dance class, which turned out to be a life-changing experience.

“It immediately felt like home to me,” Hindi said. “That’s when I started to come out of my shell, stop testing the shallow waters, and start diving into the deep end. I remember that confidence spilling over into other environments.”

Hindi would continue dancing competitively and performing in musical theater for 13 years. This same sense of belonging has translated to his experience at KGI, where he has a concentration in Translational Research within the Master of Science in Applied Life Sciences program and also completed the Postbaccalaureate Premedical Certificate (PPC) program.

“At KGI, I’m surrounded by people who share my goals and are super supportive,” Hindi said.

“This really sealed the deal for me as far as going from someone who wanted a life where I wouldn’t have to interact with anyone to this stage where I know that I might occasionally be an introvert, but I absolutely could not get by without other people in my life.”

KGI has facilitated growth for Hindi and his classmates on multiple levels. They have learned self-awareness when it comes to adopting a professional tone in written and verbal communications and being respectful of others’ time.

“On a personal level, both my fellow PPC classmates and I have opened up more and dropped the whole pre-med facade—the idea that as long as you get a 4.0 GPA and a perfect score on the MCAT, you’ll get into a good school,” Hindi said. “Now we’ve realized it really comes down to you as an individual and what you bring to the table. Because of that mindset shift, a lot of us are much more easygoing and ready to take on whatever is thrown at us as opposed to trying to control outcomes and micromanage.”

Hindi commends PPC directors Joon Kim and Elba Muñoz for teaching them these lessons and for offering a balance of honesty, critical analysis, and kindness. He also praises professors Animesh Ray and Mikhail Shilman for their down-to-earth attitude and relatability, despite their formidable accomplishments.

“I also have to give a shout-out to Dr. Niemz [Angelika Niemz] for being as involved with the students as she is, in addition to being involved with several student organizations,” Hindi said.

Now as an Admissions Ambassador, Hindi gives student tours and serves as a bridge for potential students, showing them how KGI can fit into their career trajectory.

“Zaed is a welcomed addition to the KGI Admissions Ambassador team!” said Nathan Araujo, KGI Director of Admissions. “His perspective and experience will encourage other future applicants to push through and persevere in their own pursuit of higher education as he has, his entire career. It’s a pleasure to work alongside him supporting our students!”