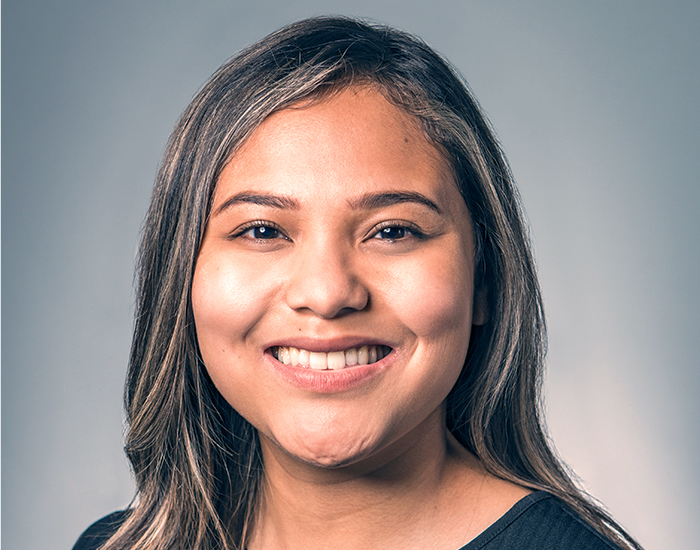 The work Anderson is doing with City of Hope expands upon the skills she is learning in KGI’s Master of Science in Human Genetics and Genomic Data Analytics (MSGDA) program.

Anderson first completed a bioinformatics internship at City of Hope in the summer of 2021 and has continued to work with them over the course of the year for her capstone project on Acute Myeloid Leukemia (AML).

AML is a heterogeneous, highly malignant type of blood and bone marrow cancer. Generally, patients with AML have poor prognosis, but this can often be improved through bone marrow stem cell transplantation (BMT). City of Hope has one of the largest and most successful BMT centers in the nation.

The BCOR gene plays an important role in the function and survival of blood cells. Loss of function BCOR mutations are believed to have several deleterious pathogenic effects in the context of AML, and on the whole, they are believed to serve as a negative prognostic indicator for AML.

One of the goals of Anderson’s capstone project is to investigate whether BCOR mutations contribute toward the transition from a normal cell state to a leukemic cell state during AML disease progression. Using a CLIA-certified, in-house curated gene panel, which enables them to test for specific genes instead of all the genes in the human genome, City of Hope has been able to track patients’ disease progression more effectively and efficiently.

“By taking different blood samples and analyzing them over time, we can determine how well they’re responding to treatment at the gene level,” Anderson said. “If they’re about to relapse, we can see the different gene expressions change. Then, if we anticipate a relapse, we can adjust the treatment to help prevent the relapse or to ensure that the transplant goes the way we hope.”

The team used a mathematical model to stratify the gene expression levels of the controls and the leukemic patients.

“The reason we use mathematics is that it’s objective,” Anderson said. “Machine learning is dependent upon a person putting the parameters into the algorithm. They can create a program to make predictions on disease progression, but the program won’t account for any confounding factors they may be unaware of.”

“Downstream from genomics, there’s transcriptomics, which involves mRNA,” Anderson said. “The next level is proteomics, or the study of proteins in a system or organism and how they interact. After that, you have other levels like metabolomics. In computational biology, when you’re making models for predictions, you integrate the different types of levels to get a holistic picture of what’s going on in the body.”

Several KGI faculty members have been particularly influential in guiding Anderson’s journey. Professor of Management Dr. Steven Casper helped her to get out of her comfort zone for a class project which involved contacting companies and hospitals to gain information.

“I was nervous about calling random people, but he was very encouraging and gave us the resources we needed,” Anderson said. “Also, I really admire (MSGDA Program Director) Dr. Barbara Fortini. She has a lot on her plate. Even though many things happened suddenly, and she may not have all the answers, she has handled everything very professionally. I aspire to be like that one day.”

From Professor of Genetics Dr. Barbara Bailus, she learned how to connect with people with different scientific background levels and explain concepts in a way that they can understand. She owes her knowledge of computational biology to Harvey Mudd College Professor of Computer Science Dr. Zachary Dodds, who teaches GENE 312 Programming for the Biosciences at KGI as an Adjunct Professor.

“I would not know anything about programming or coding if it weren’t for his class,” Anderson said. “It’s a great class for beginners, and he’s a fun teacher to listen to.”

“It’s been a wonderful opportunity to work with Laurel these past two years,” Dodds said. “In 2020, Laurel’s enthusiasm buoyed our all-Zoom GENE 312 cohort, and I was thrilled when she turned that energy to fall 2021’s course, for which Laurel worked as a peer-tutor (and overall promoter!). This year, as one of Laurel’s capstone advisors, I’ve been excited to watch how deeply Laurel has leveraged her energy and talents, addressing problems in the space where genomics and computation overlap.”

Anderson is currently applying for positions in bioinformatics and computational biology, where she plans to either continue working on treatments for blood and bone marrow cancers or pursue brain cancer research.

“However, if none of those paths work out, then I would like to pursue a career as a comedian in Japan,” Anderson said.

“I know seven languages, and one of my favorites is Japanese. If it wasn’t for COVID, I would have been an exchange student at a Japanese university. But in hindsight, it was good that I came to KGI instead.”