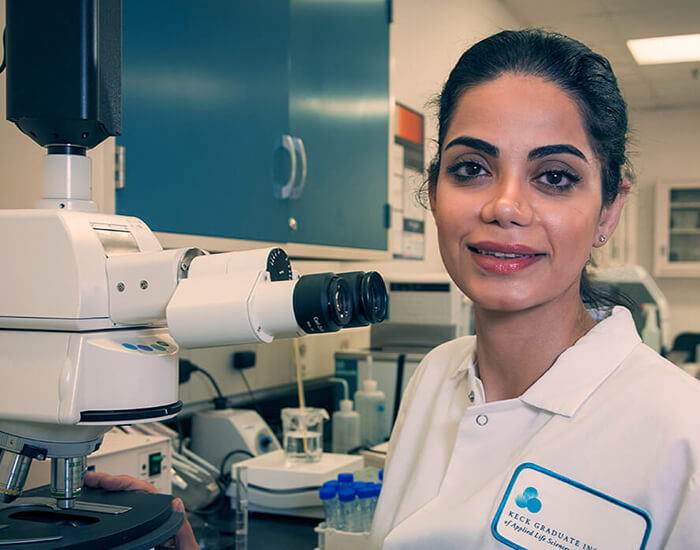 Degenerative diseases and inflammatory disorders become more common with age, in people and animals alike. But Keck Graduate Institute (KGI) Assistant Professor of Medical Diagnostics and Therapeutics Kiana Aran is involved in research that aims to lessen these ill effects of aging.

Aran and her collaborator, UC Berkeley Associate Professor of Bioengineering Irina Conboy, recently received a four-year, $1.55 million RO1 grant from the National Institutes of Health (NIH) to support this research, a project titled “To develop the next-generation blood-exchange devices in order to improve our understanding of how age-imposed and pathological changes in systemic milieu influence multi-tissue health and regeneration.”

“Previous studies have shown that blood exchange can have a regenerative effect in an old animal and a degenerative effect in a young animal. We want to identify the rejuvenating and degenerating blood factors. Blood and its composition change as we age, and we believe these changes play a significant role in determining when and how we age,” says Aran. “For example, the concentration of certain proteins in our blood increases as we age. If we find a correlation between this increased concentration and some negative effect of aging, we could then develop systems to clean blood of these excess proteins. The goal would be not to reverse aging but to have healthier aging.”

Aran notes that their research is of particular interest to the NIH because age-associated disease is a costly burden on the U.S. healthcare system. Though her work will involve developing devices for use in basic research, the hope is that that project will ultimately lead to a treatment for degenerative diseases in humans.

“I’m a biomedical engineer by training, and my experience is in combining various engineering fields to develop meaningful tools for basic and translational research. I’m very interested in seeing my devices in action and also very interested in aging. That’s motivating me,” says Aran, who completed an NIH-sponsored postdoctoral training fellowship at the Buck Institute for Age Research before joining the KGI faculty in 2017.

The new NIH grant also supports student researchers working with Aran at KGI. Among them is Payam Amiri, a PhD student who earned his Master of Science in Applied Life Sciences degree at KGI in 2017. He is helping Aran design, fabricate, and test devices as well as using microfluidic platforms to conduct experiments.

“I’m developing techniques that a lot of biologists don’t have, which really opens a lot of doors for me,” says Amiri, who earned his bachelor’s degree in biochemistry and molecular biology at UC Santa Barbara. “It’s also the first time I’m working on a systemic rather than cellular level.”

Amiri believes joining Aran’s lab has contributed to his growth as a researcher, pointing to the example she sets through her work ethic and the different perspective on biology her engineering background provides. He has also discovered his potential career direction in research.

“I can see myself staying with aging,” he says. “I want to do something that’s translatable to humans, and aging is one of the big problems everyone faces someday.”

For now, he and Aran are focused on the research supported by the NIH grant, which she expects will result in developing successful devices and using them to test a few biomarkers. Aran also anticipates that this research will lead to additional testing involving different biomarkers and targeting specific diseases.

“The grant is critical to our team and to the advancement of this project,” says Aran. “I can contribute as a scientist and engineer to developing better tools for biologists to use to understand the aging process. It also opens other areas of research for me, to perhaps develop sensors to monitor the biomarkers of aging we discover through this research.”