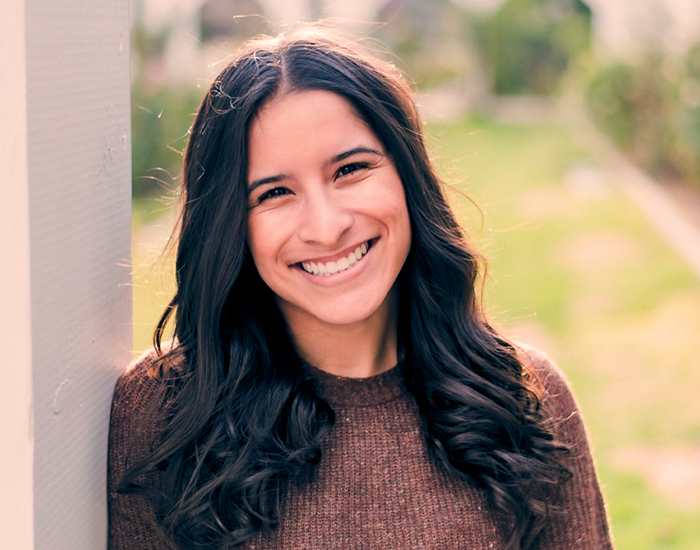 Frankey Sanchez, a Keck Graduate Institute (KGI) Research Assistant for Associate Professor of Biopharmaceutical Sciences Dr. Derick Han, recently received a Diversity Supplement Grant from the National Institute of Health (NIH) in the amount of $155,564 ($103,778 direct and $51,786 indirect). The grant will pay for Sanchez’s salary and attendance at conferences for two years.

Sanchez is KGI’s second Diversity Supplement Grant recipient, with Aldo Arce receiving the grant in fall 2021. The grant is designed to support individuals from underrepresented groups pursuing careers in science or medicine. Both Sanchez and Arce were referred to Han by his collaborator Dr. Jerome Garcia at the University of La Verne, a Hispanic-Serving Institute.

Han’s primary area of research revolves around liver diseases and is currently investigating the relationship between the liver and brain in promoting Alzheimer’s disease.

“The liver influences so much of our health—it’s the organ that regulates metabolism—and thus it’s going to have a huge impact on the brain,” Han said. “We’re finding that things that affect the liver, like alcohol or a high-fat diet, change proteins in the liver that may promote Alzheimer’s disease.”

For Sanchez, who earned her bachelor’s in biology, collaborating with Han in this research project provides an opportunity to gain valuable lab experience—she did not gain much exposure during her undergraduate education due to COVID-19 precautionary measures—while becoming a stronger candidate for medical school. Beyond that, though, she is passionate about scientific inquiry in and of itself and is committed to advancing her knowledge consistently.

“I’ve always liked science because—even though it still has gaps—it was the only thing that made sense to me,” Sanchez said. “When I got to La Verne, I didn’t have a path. But I took many science classes. When I began the higher-level classes like physiology, biochemistry, and microbiology, I began to understand how everything works and see things more clearly. The desire to know more kept growing and everything fell into place.”

Garcia has been a significant influence on her growth as a scholar.

“Dr. Garcia is an amazing professor and mentor who puts a lot of care and effort into students because he sees that we want to learn, and he challenges us to push ourselves,” Sanchez said. “I thought I had already reached the final stage, and he pushed me farther and helped me realize how much more capable I was.”

Now she is continuing to grow and stretch herself at KGI.

“When I sit in the lab meetings, I’m in awe,” Sanchez said. “Everyone I work with is so intelligent—how they come up with experiments, how they manipulate things to get an outcome, and how they alter experiments if something’s not working.”

Sanchez has discovered that performing experiments is not like following a script but requires high-level critical analysis and outside-of-the-box thinking.

“I’ve learned that sometimes you have to reinvent the wheel,” Sanchez said.

“The biggest thing that has impacted me thus far is seeing how everyone can contribute their ideas. Sometimes it works, and sometimes it doesn’t. But it allows us to keep moving forward and making progress with the experiments rather than staying stagnant.”

“Alzheimer’s disease is so prevalent, but there’s a lot that we don’t understand about it,” Sanchez said. “I’ve witnessed family members who had Alzheimer’s progressively getting worse, and I didn’t understand why. That is why I gravitated toward this research when the opportunity arose.”

Sanchez is also interested in exploring cancer research in the future.

“The best part about growing and learning—especially as a student—is that you can challenge yourself in many ways,” Sanchez said. “Many times, we’re more capable than we think. Hopefully, I can prove that to myself during my time here and become a better student and thinker.”

The NIH Diversity Supplement Grant provides dedicated scholars such as Sanchez with the tools to achieve their full potential in the medical field. Arce—KGI’s last grant recipient—has since been accepted to medical school and co-authored two papers.

“It’s been a fantastic experience for Aldo, and hopefully, it will provide Frankey with the same opportunities and make her a stronger candidate for medical school,” Han said. “Frankey came from a tough background, and it’s amazing how she’s excelled so much. I think she’s worthy of this supplement. Overall, the NIH has been great in supporting underrepresented populations.”